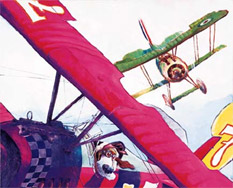 Since the outlawing of aerial dogfights and cockfighting the only way for a gentleman to solve a dispute is with the fine art of snaps.Insulting your fellow man is a tradition that dates back to at least the pilot episode of the original Rifleman series, possibly even further. Back in those simpler times an insult could be something as inoffensive as belittling a man's spending habits or making light of his wife's ability to stifle yawns. These days the fine art of insulting another has spiraled out of control. Much like the unchecked technological progress of nations engaged in a world war, the techniques of making a fool of your least favorite person have been honed to a science. In this day and age the insult - or "snap" - can be as convoluted as it is biting. A good snap might have a perverse logic that requires minutes for your opponent to unravel.

I suggest a new form of snap, one so diabolical that to use it will make you feel like a veritable Oppenheimer deploying your witty atomic bomb. I refer to this new breed of superior snappery as "Turbo Snaps" or "Livah Snaps" depending on whether or not I am in mixed company. The first step to piecing together this Turbo Snap is to select a standard stock snap start or "SSSSS". The fifth "S" stands for "sorghum". To make things easy on you simply select one of the following stock snap starts from the list below.

Yo local congressional representative so…

Yo Internet Service Provider so… 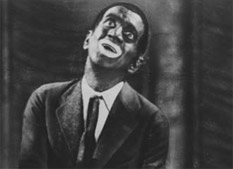 MIZZAMMY!!Once you have selected the SSSSS that fits your snapping needs you need to make with the adjectives, picking one that applies to the intended victim of your Hiroshima-esque insult. There are dozens of adjectives listed in the dictionary and it would take too long to type them all out here, but you should have several already memorized so feel free to use ones familiar to you. Don't be afraid to venture into uncharted territory though, there is a place for the usual "fat" or "poor" and then there are times when it helps to come out of left field with "malodorous" or "febrile".

The final and by far most important step in creating your livah snap is to combine the preceding two elements with an insult that makes no sense whatsoever and is completely unrelated to the first two parts. It helps if you can somehow make it seem related, but even that isn't necessary to launching a successful turbo snap attack. The key to success lies in the frequency of complex snaps on the black market today. People will assume that you are using a forbidden or eldritch snap so overwhelmingly complex and ingenious that they will either submit immediately or spend hours pondering its secrets. If they don't give up immediately then you may begin to assemble and launch a flurry of devastating turbo snaps.

To assist you in this endeavor I have provided some example turbo snaps that I myself have used on occasion to defeat a foe. Keep in mind that these are just guidelines as the best livah snaps are those you customize for the situation you use them in.

"Yo momma so ugly when she get out of bed people in the United Arab Emirates fall out they chairs!"

"Yo car so beat up when you go to the drive in movie a helicopter be touchin down on top of an oil platform!"

"Yo face so crazy when you take off yo hat in a restaurant the waiter bring you a tray of mints!"

"Yo family so broke that when you move into yo house a tornado hand deliver a subpoena from father time!"

"Yo momma so lazy when she build a snowman she use carrots for EYES and coal for they NOSE!"

"Yo Internet Service Provider so stank when you log into Everquest you got people up in Canada playin Tetris on they graphics calculatuhs!"

"You so stupid when you compete in a spelling bee you get bit by a preying mantis!"

"Yo girlfriend so cantankerous when she make pies she make em out of relief maps!"

Mastering the skill of turbo snapping takes time, but since this is the first true guide on the subject I know of you should have no problem being prepared long before the competition is. Good luck, and may every snap that issues from your mouth make they face turn so red that bananas fall out they ears.

Not Found in a Hallmark Store

Livestock and the ever-entertaining Something Awful Forums have brought us a new edition of Photoshop Phriday. This week's theme is a take on those annoyingly cute figurines you find at card shops entitled "Far From Precious Moments". You know, the ones only fat old women and crazy homosexual men collect. 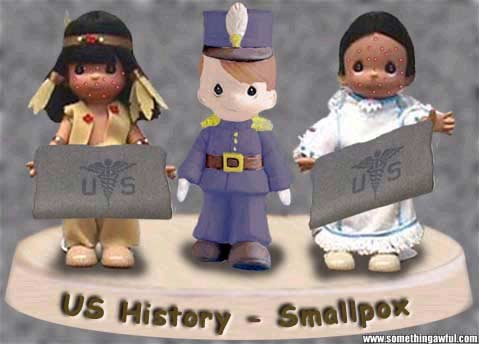 I found this Photoshop Phriday particularly funny, but maybe that's just because my town and Ohio in general seemed to be overrun with this inoffensive cutesy crap. Laugh with me! Head on over and check it out!