"Lunch time!" Said a female voice at my side as she slid a rubber tube between my wired-shut jaws and then snaked it down through my esophagus. which is the part of your neck that is on the inside of your neck. I heard the nurse switch on a machine that began forcefully pumping liquid into my stomach.

"...In other news, the level of the blood sea has dropped another five feet today in what appears to be..."

"...are you suffering from acute bird paranoia, or ABP? If you are like the millions of..."

The noise of the pump rose in volume and drowned out the TV, sounding like a freight train along a track knee-deep in spaghetti. What I am trying to say is that it made a chugga-chugga sound that also had a gurgling, wet quality to it.

"Oh geez, it always does this."

The racket of the pump continued, my belly began to swell and grow tight. Over the din I just barely made out a handful of words from the TV.

"...and now we take a look at a classic video game, you probably remember it... Dig-Dug!" 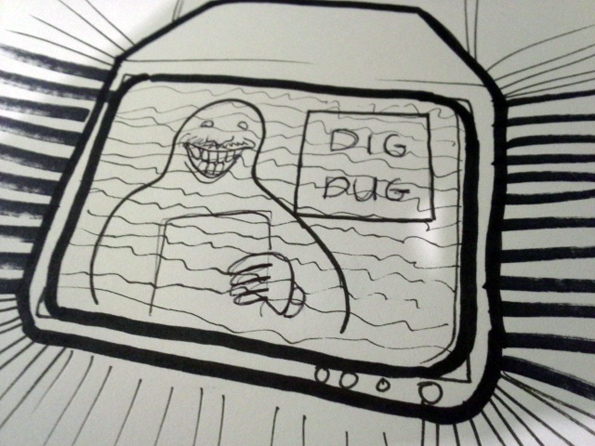 "Well, I guess this is it." I thought to myself internally and without speaking out loud because my jaw was wired shut. "I am not sure what lesson I am intended to learn with all this... but..." My belly grew unbearably tight.. almost to the bursting point...

"Ok, let's just switch this off now.." Said the same female voice at my side. The pump stopped pumping with a sudden clank.

I could feel my stomach slowly reduce in size as the pressure from the pump dissipated.

"Ok, let's get you up into a wheelchair and down to the operating room..." She said.

"Here you go..." Another nurse said, as she balanced a new pair of glasses on the bridge of my swollen nose.

It may come as a surprise to someone with less developed deductive abilities, but when the glasses were put on me and I could see that I was in a wheelchair and being wheeled down the hallway of a hospital, I was not surprised in the least.

Truthfully, it takes a lot more than that to surprise me.