In this time of uncertainty brought about by the antitrust case filed against us, State Og reminds our customers that we have done great things for the public and will continue to do so long after this malicious and unjust case ends. For example, our Surprise Demolition program was a great hit, bringing suspense and excitement to the otherwise dull task of tearing down buildings for community development. Stick with us, things will get better! Special thanks this week go to: Don "Motorcycle" Jolly and Matt "Coco13" Rock.

Greetings. My name is Harold Fleiss, and I am the regional manager of State Og North Dakota. Our company will be needing some specialized metallic products in the coming months, and we heard that your steel firm is very flexible in producing unusual designs. Please inform us as to the plausibility and cost of the following items :

+ Two gigantic knives, roughly the size of arms for a 60ft bipedal creature.

+ One wicked cool looking beak, with four or more curved spikes or something.

+ One huge metal phallus, twice the size of the Chrysler building, with some sweet flames or a mean face or something painted on it. Bulging, airbrushed veins a MUST!

Thank you very much for your time. Hope to hear from you!

As always, State OG doesn't sit on our laurels. We've probably lost them by now. They're probably under the couch. "What is a laurel" you may ask. The question you should be asking is, "What is State OG?" and you shouldn't even ask that question. You should be asking, "Who doesn't know about State OG?" and that answer is not very many people. We have name brand recognition in: 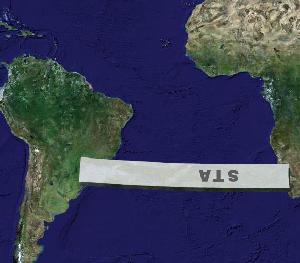 Giant magical photo of banner mid-construction.Barring the obvious joke answers, State OG is extremely pleased with these results, and was going to get a few beers down at the bar. But then we found out that galactic awareness was at a number so small, even if you took that number and combined it with a really big number, that result would still be really small.

Enough of the black arts of mathematics. State OG has already taken bold, dramatic steps in the fields of advertising. Using a spare ocean we snapped up in an Omaha game, we've just finished construction on our official State OG billboard. The advertising sign spans so much of the Earth's surface that if you take the amount of acres it covers and some really small number and combine them, it would still be really big.

Already, the billboard has created new jobs in such areas as

and doing something that, if our parents loved us, they could be proud of.

What long-term global devastation is the result of this monument to Madison Avenue? First off, the shadow over the ocean is slowly destroying surface life. Unable to cope with being on the wrong side of the glorious State OG banner, underwater fauna, fish, whales, are dying off in record numbers. Protesting groups from environmentalist groups both human and mermaidian have already begun harassing us, both staging underwater protests and riding Troyboats directly under the giant banner. They threaten to sue. 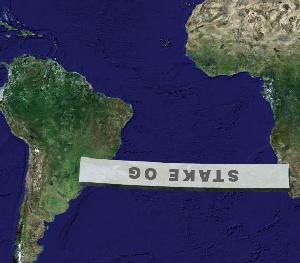 Final product.That water will get hot enough soon, though. All that extra weight on one side of the globe is throwing Earth out of orbit, gently spinning it closer and closer to the sun like a drunken ballerina moth. Already, the entire northern hemisphere is heating up in an incredible display of things becoming hot. This phenomenun, which we have dubbed "summer" doens't promise to let up for the next 4 months, which is when the degree of spinnatude from the Earth will cause the southern hemisphere to be affected with "summer," while the northern hemisphere (like the current climate of the southern hemisphere) will be under the condition which State OG wild guessers have called "Ricky Lake's foot." Until the destruction of the Earth, we shall be in a constant state of switching between summer and Ricky Lake's foot.

With the State OG banner complete, we have already been taking calls from such far-off planets as Mars, Pluto, and Jupiter. It's only a matter of time before we return their calls.