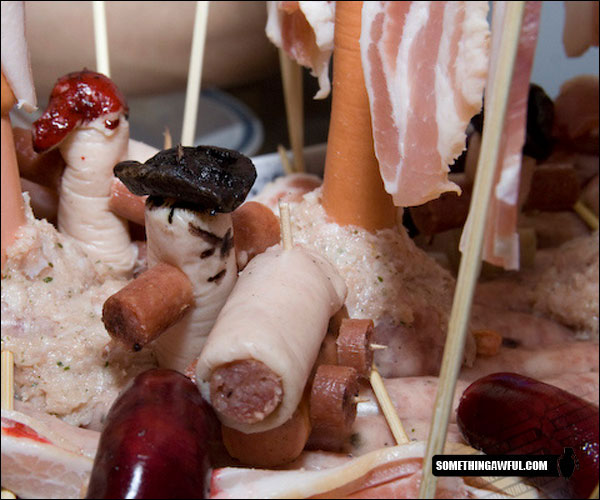 [Jerry, George, Kramer and Elaine have now completed the transformation. They stand dazed, lurching among the other converts on the deck of the meatship. Jerry is now mostly chicken meat, some of which is fried and some of which is baked. Kramer is half spare rib, his jaw grotesquely misshapen by a growth of mutton. George is now fully attached to the meatship by a bacon outcropping which reaches up to his chest. Elaine's clothes are ripped and dirty, and her body exhibits pepperoni-shaped spots.]

Kramer: [unable to speak intelligibly because of his jaw] Munghhhrr&Jeeaay.

Jerry: No, Kramer! You can't have any more chicken. I can barely walk!

[A round rectum in the meatship cabin opens up and Newman, attached by muscular tendrils of pork loin, sails over the deck and bumps into Kramer, knocking him down]

Newman: You four! It's your turn to find converts for the glory of our celestial vessel.

Jerry: Well how are we gonna do that? Look at us, Newman!

Newman: Use your powers of persuasion. Ponderosa wants us all to stop using force, so no more [Newman vomits up raw hamburger meat as a demonstration] capiche?

[Kramer begins to have dry heaves. Some gravy runs down his mouth and onto his leg]

Jerry: Yeah this has success written all over it.

Newman: Go! Ponderosa and I will brook no dissention.

[Jerry stumbles up on stage, disoriented and confused]

Jerry: What's the deal with, er, vegetables? I mean, they don't taste good. So I just eat meat.

[The patrons boo him]

Jerry: Any other meat eaters in the house? Have I got a cruise for you. 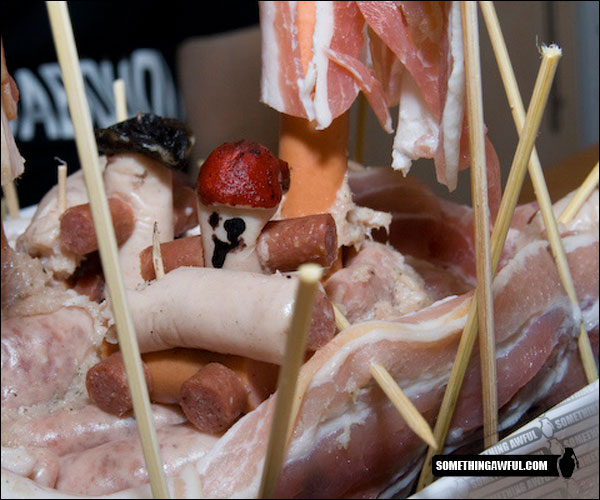 [One of the patrons throws a tomato, which splatters on Jerry]

Jerry: [high-pitched whine] Blood curse! Blood curse! Who would sully my new body with such an abomination as this? I tell you, you let one tomato seed germinate in here and its curtains! Curtains, people!

[He retreats off the stage and enters the bar, approaching a young woman]

[She becomes furious and sprays Jerry with mace. He shrieks and runs out of the club]

[Elaine has been walking around smiling at strangers, trying to entice them onto the meatship. She approaches a middle-aged fat guy]

[Elaine opens up her tattered, greasy blouse to reveal two ham hock breasts with pepperoni areola. There are teeth marks where the nipples, composed of some manner of sausage, have been nibbled off]

Guy: [recoiling] Yama hama. [Elaine looks disappointed] Oh wait, how could I be so insensitive! You're a survivor aren't you? My mother had breast cancer too. Except her doctor did a little better job on the reconstruction.

Elaine: Come to the meatship.

Guy: Uh, yeah. Listen, it's been nice, but I have to go. Good luck with all that.

Mr. Steinbrenner: Georgie!! Where you been, mister? You're in a lot of trouble, boy, a LOT of trouble!!

George: Meatship, sir I was

Mr. Steinbrenner: At a meeting?! Bwooooooaahhh. Wait a minute. Wait. A. Minute, George. A three week meeting? That makes no sense. Sure, once I had one that felt like three weeks, but never a meeting that actually lasted that long. Then again, maybe I believe it. Maybe you were at a three week meeting. Those guys at corporate are crazy with the meetings. Sometimes during really a long meeting I fantasize about riding the waves in a gravy boat. Do you ever do that George? My wife says that's weird. She says there's no such ship. Let me tell you, though, if there were, surf's up! A three week meeting, though, that's nuts! If you were at a meeting for that long, then you are one tough cookie. On tough cookie, George. And tough cookies get promotions where I come from! That's right, slugger. You just got yourself a promotion. Now about that gravy boat&

[George slowly turns around and leaves, his detached bacon leg growths slogging along the carpet, as Steinbrenner continues to ramble] 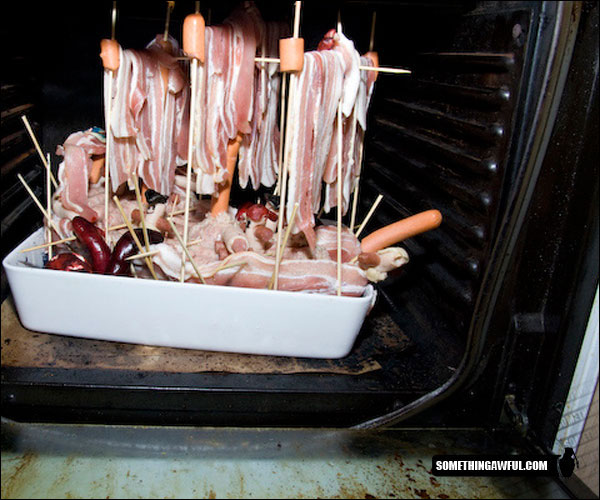