I don't watch much television, but I made sure to record My Own Worst Enemy, because the premise seemed so outrageously stupid. A special agent shares a body with a meek family man, who suddenly starts waking up while there's still crazy shit happening. I wanted to hear how they'd explain the necessity of such an operation, but I couldn't stick around for the exposition because of a scene that happens soon after a government official tells the square side of the schizophrenic that he's a spy. He reacts by pounding out "Chopsticks" on a grand piano, bowing, then dramatically reciting "Roses are red/violets are blue/I'm a split personality/and so am I."

Fuck that. I deleted the show immediately, because nothing that followed could possibly redeem such a colossal lapse in intelligence. However, I became morbidly curious about what kind of spectacular retardation I might be missing by neglecting TV. So I recorded three random "comedies," giving myself an out that I don't with the movies and music I review: When the suckage started siphoning out my soul, I'd stop watching. No samples from the test group went the distance in the initial installment of TV Threshold. 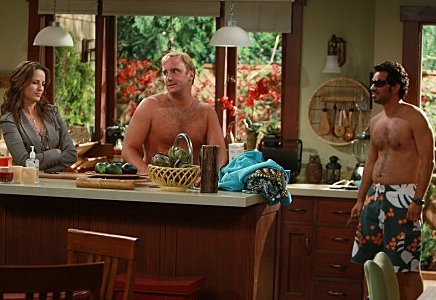 More like GAYry Unmarried.Gary Unmarried: I should've stopped watching at the 30-second mark, when Gary triggered the overzealous laugh track by slaloming across a mopped floor in socks. At the very least, he should have fallen, preferably in a manner that caused serious injury or death. Let him come back as a wisecracking ghost, if you insist on making a stupid sitcom: At least we'd always have our awesome scene. Physical comedy without pain is like watching a fucking mime.

Gary is unmarried, as the title divulges, but he was married once, to a woman who bore him two flawed kids. Gary's son inherited his dickheadedness (he wears sunglasses indoors, hits on Gary's new girlfriend and makes horrible, just-like-pop jokes), while his daughter takes after her preachy mom (she gets a Henna tattoo of the recycling symbol). Gary forbids his ex-wife from befriending his girlfriend, but they abandon him, leaving him to bellow "the man of the house has spoken" in an empty kitchen. That's when I left him, too.

Time elapsed (when I turned it off): 13 minutes

Signature moment: The laugh track howls and wheezes after a numbingly unfunny Gary rant that ends with the phrase "permanent clownhood."

Suggested episode improvements: Gary slips on the slick floor, and the screen goes blank. Cue fantasy sequence in which each character imagines life without Gary, and realizes it would be a vast improvement. While Gary lays comatose, his ex-wife and girlfriend become lovers, and they give his kids a fresh start without his poisonous influence. When Gary wakes up and discovers everyone's gone, he thinks about his obnoxious behavior, and decides to become a better person. Inspirational music plays as he gets out of bed on his way to do good deeds. However, the hospital floor was just mopped, and Gary slips and falls, this time fatally. The words "permanent clownhood" echo in increasingly softer tones until the credits roll.

"They look like Spice Girls! Zing!" -- This show's writersKath and Kim: "You look old," Kim (Selma Blair) tells Kath (Molly Shannon). What's really old on this show are the pop-culture references: Heather Mills' 2007 appearance on Dancing with the Stars! The Olson Twins! Snoop Dogg! Take that, celebrities nobody talks about anymore! Kath watches a Salt 'n' Pepa video, which inspires her to use urban slang ("check it with the baditude") and sport a dollar-sign pendant. Comedy writers always think it's funny when white people act like black people, butchering hip-hop catch phrases while using exaggeratedly stiff enunciation, but it never has been, and it never fucking will be.

Kath is getting married to a quirky dork who owns a sandwich shop. He tells her he's anxious about the reception, because he sucks at dancing. After this confession, Kath spots him with a mystery woman, and concludes that he's cheating on her. Could this lady actually be a dance instructor, with whom he's been meeting in secret in order to surprise Kath? I didn't make it to the end of this show, but on the basis of the television programs that I have watched in their entirety during my lifetime, I'll go ahead and say that's pretty fucking likely. In the useless side plot, Kim suspects her "enstranged" husband is cheating, too. Kath and Kim attempt to forget about their man problems by going to a gay bar. "I've had enough gay," Kim whines. So have I, Kim, so have I.

Signature moment: Kim screams "that's what you get for having no class," then turns around to reveal that her thong is sticking out above the top of her short shorts. Somewhere, a muted trumpet plays its mandatory tune.

Episode improvements: "You look old," Kath tells Kim. "Like, seriously, Selm- Kim, it's really weird having someone so old-looking be my daughter." Kim storms out to complain to her husband, but can't find him. Kath can't locate her fiancé, either, so they reconcile to look for their missing men. The trail leads to a gay bar, where they find their guys making out. "Had enough gay?," Kim's husband asks her with a wink. "You have no class," she screams. "Oh, be nice," responds a swishy voice from the crowd. Kath starts flailing spastically, then loudly announces "it's me, Mary KATHerine Gallagher, Superstar!" There's a silent, awkward pause after a comic record-scratch sound effect, then everyone dances to "What Is Love" from A Night at the Roxbury. 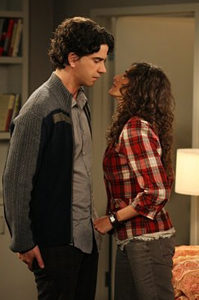 Another tender brother-sister moment.The New Adventures of Old Christine: Did you know that you can spell "incest" using letters found within the name "Christine"? I bet the sick fucks who wrote this episode did. Old Christine, played by Elaine Seinfeld, can't stop cuddling with her six-year-old son in his tiny bed. Perhaps because he finds her a bit creepy, the kid won't say "I love you" to her, even though she pathetically repeats it four times during the opening sequence. Her brother spends his nights talking on the phone to their mom, answering her "I love you" declarations with "I love you too" for hours. He's so conditioned to do this, he claims, that he can't hear anyone say "I love you" without involuntarily blurting out "I love you too." Old Christine tests him by saying "I love you," then she keeps saying it, getting closer all the time, until she's whispering it between passionate kisses. Well, that didn't happen, although she mounts him twice (under the guise of 'wrestling'), and she sleeps next to him in lieu of spooning her little boy. Maybe they're saving the big brother/sister sex scene for the season-closing cliffhanger, or maybe it happened at the end of this episode: I turned it off after the second time she straddled him.

Signature moment: Two bitchy blondes observe Old Christine's futile attempts to get her kid to say "I love you." "That is so sad, it's not even funny," one says. "Oh wait, it's a little funny," she quips, and they cackle, and the laugh track activates. No, you were right the first time.

Episode improvements: The Old Christine writers left so much foreshadowing unfulfilled. For example, the first brother/sister scene reveals Old Christine never knocks before entering rooms. Later, we see that her son has a dartboard on his door. So, Old Christine barges in to her boy's room, only to catch a sharp projectile between the eyes. As she lays dying, the son finally says "I love you," and the laugh track says "awwww." Then the brother, offscreen, immediately responds "I love you too," and the hearty guffaws resume.