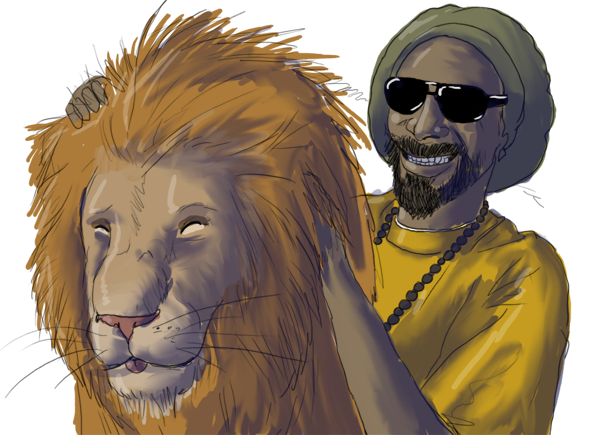 Dan the Animal Man - Carries around a satchel full of tiny vials of exotic animal pheremones which he sprays on Snoop Dogg at the Zoo to give other patrons the illusion that he is a natural 'Beastmaster', beloved by all animals.

Seanald "TV Man" Hayes - snoop is getting too old to understand the developing tech of tv and he has this cool black guy in a jacket & indoor sunglasses who handles all the component stuff and hookup cords, snoop brings him out at live concerts and says "This right here is my boy, thats my tv man right there, much love"

Comedy Central's Greg Giraldo - briefly hired to personally roast snoop after every show on the tour after snoop saw the roast of david spade uncensored on comedy central at 2 am. killed in 2011 during altercation over joke about Seanald "TV Man" Hayes and circuit city's liquidation

Cyril Latrine - Steward. Basically keeps the "throne" warm. basically sits on the toilet in the mens bath room for hte duration of opf a live performance so that if snoop dogg needs to take a shit after wards then the toielt seat will be warm

Cedric "Mr Meme" Green - PR man in charge of making sure there's no negative memes online about snoop dogg, notable for floating the "you might be snoop if.." and "Snoop is the shit, thats it" catchphrases on the g4 forums

Juan Ramón Jiménez - displaced soul of dead spanish poet forced to hang out with snoop dogg and his posse for eternity due to his actions during the spanish civil war. humiliatingly forced to masquerade as dead rapper tupac for coachella '12

Thanks to WET BUTT and FYAD for the content; neoaxd for the art; and Twisty for the promo text!