The Expendables; Scott Pilgrim vs. The World; Eat Pray Love

You may have noticed a certain leaning in favour of a particular audience type here on Something Awful, but it's an audience type that comes with the territory. This is, after all, "The Internet," and films like The Expendables and Scott Pilgrim vs. The World are aimed squarely at the kind of people who populate a place like "The Internet". But this week, in addition to reviews of those summer gems, we decided to make Vargo endure Eat Pray Love. Branching out to potential new readers or picking on the new kid? You decide.

What it Lacks in Charm, it Makes Up For in Bodily Harm.

EXPECTATIONS: Nobody can deny that Sylvester Stallone has made one of the most impressive come-backs in Hollywood history with Rocky Balboa and Rambo, and now he's giving us something new with The Expendables. Thanks to a cast packed with some of the most beloved action-movie superstars of all time, hopes for The Expendables are so high, it's difficult not to expect some level of disappointment.

REALITY: If I had to sum up my experience with The Expendables in one sentence, I would have a hard time deciding between the two candidates to which I have narrowed it down. The first is "A pure yet brief exercise in giving audiences exactly what they want," and the other is "Dolph Lundgren stamps on a man's face whilst driving a car." It occurs to me, in hindsight, that these two sentences are essentially the same, and that either could be used to express my feelings on the film, so we'll go with the latter because it sounds cooler.

The titular Expendables are mercenaries, six ultimate badasses led by Barney Ross (Sylvester Stallone). His subordinates Lee Christmas (Jason Statham), Ying Yang (Jet Li), Gunner Jensen (Dolph Lundgren), Toll Road (Randy Couture) and Hale Caesar (Terry Crews) all push the boundaries of having silly names while following Ross through thick and thin. After a run in with some pirates, Gunner is let go because he can no longer be trusted due to his non-specific drug habits. When approached by the mysterious Mr. Church (Bruce Willis), through their contact Tool (Mickey Rourke), the Expendables embark on a mission to free the island of Vilena from General Garza (David Zayas), only to find that the real power behind the dictator comes from corrupt CIA agents James Munroe (Eric Roberts) and Paine (Steve Austin).

The Expendables goes out of its way to include as many of the tropes and cliches as you would expect to see in this type of film. For example, Statham's character has a failing relationship with his girlfriend Lacy (Charisma Carpenter), which culminates in his laying a beat down on her new boyfriend and his jock buddies for no reason other than that Statham just has to have a scene where he teaches try-hard frat-boys a hard lesson in respect. We expect it. Just like how Mickey Rourke gives a heartfelt monologue to convince Stallone to do the right thing. It has to be there, and if anyone was going to say it, it had to be Rourke. This film knows exactly what its audience wants, and it gives it to them by the bucketload. Car chases, martial arts, knife fights, beheadings, extreme gore: It's all there, and I would not be a good critic if I pretended to be above this kind of thing. I had an absolute blast, for the most part. 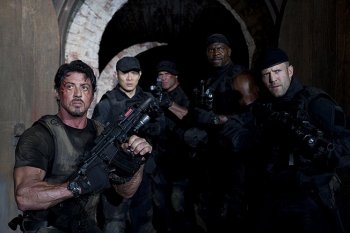 Meet the gang 'cause the boys are here. The boys to entertain you.What this film lacks is charm. We know Stallone can do charm because he invented Rocky, but here we barely get a chance to warm to any of the characters. Most of the screen-time belongs to Stallone and Statham, focusing more on their relationship as a duo. The rest of the titular group gets little to do until the explosive third act, where they let their actions speak louder than words. But, before then we never really get a good idea of who most of them are, or even how they all work as a team. Unlike The A-Team, in which the four leads are intrinsically linked to essentially form a single character, this group hardly even spends any time together when it's not working. For a film with such a self-aware mentality, it's a shame that this opportunity was missed, especially when so much of it feels like an episode of G.I. Joe: A Real American Hero.

However, where The Expendables shines in almost every regard is in its action sequences. Taking a step back from the morbid brutality of Rambo, Stallone has filled The Expendables with the right mix of extreme violence and over-the-top stunt work. With such fantastic physical performers at his disposal, it would have been easy for him to waste their talents, but he really doesn't. Statham and Li in particular get a lot of time to show off the impressive martial-arts skills that made them household names, at one point teaming up to take down a particularly troublesome bad guy. Every member of the cast gets his moment, including a climactic showdown between two characters you absolutely knew were going to face each other the moment the word "wrestle" was mentioned. 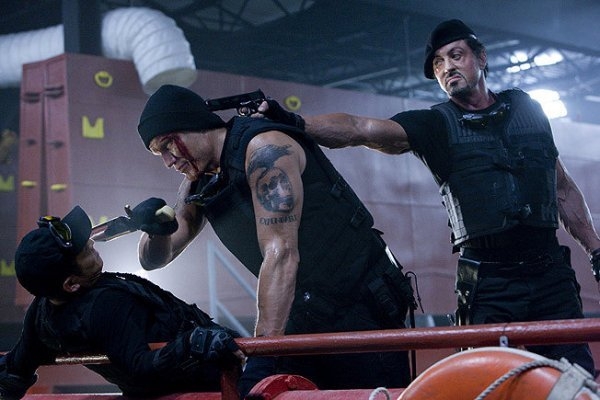 Face it boys, this picture just made you squeal.

It's a light story, designed to contort itself around a series of increasingly violent and spectacular action scenes. As you can see from the cast, The Expendables has the right amount of muscle to back up the promises it makes. Every time a nerd says "Who would win in a fight...", this film offers an effective answer. Every time two characters square up to each other in this film, that little voice in your head tells you "This is going to be amazing," and it's absolutely right. Watching Jet Li and Dolph Lundgren fight each other might not be something you ever even thought about, but when it starts happening on screen, you realise that this is somehow important to you, and that Stallone understands a basic primal need in all of us to see this kind of thing. 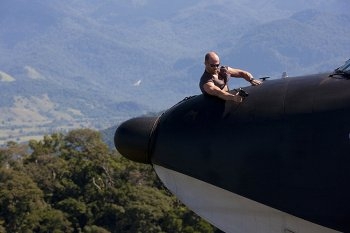 Oh, that's just Jason Statham shooting people from a fast-moving aeroplane. No big deal.You see, what Stallone understands is that the kind of people who are watching his films now are the same kind of people who watched his films before. They are, therefore, the same people who have at least one fond memory of Stallone, Lundgren, Li, Statham, Roberts and even Austin on a non-cinematic level. You might not have these kind of memories for Couture or Crews or even Gary Daniels, but this film will make new ones. This understanding is not disguised in any way, either. Some characters are never referred to by name, encouraging us to associate them with the actors playing them, and a lot of self-referential jokes are made at the actors' expense. Mocking Statham's baldness; Rourke's romantic failures; Li's reduced stature; Schwarzenegger's desire to be president (and declining physical fitness); Stallone's perceived lack of intelligence; and Couture's cauliflower ears; the inside jokes are piled up on top of each other endlessly, generating almost all of the film's humour.

The only problem with any of this is that it's not particularly current. If this is your first action film, as well it might be, you may be left wondering why certain plot threads go nowhere, or why certain characters and storylines exist at all, which is to say nothing of the ridiculously up-beat Saturday morning cartoon ending. If you want to see something entertaining and action-packed that cleverly evokes and deconstructs the tropes of the genre without feeling like it would have been funnier 20 years ago, I believe The A-Team is still playing. But, if you want to see an explosive action-adventure that turns stunt-casting into an art form, then The Expendables is the only logical choice.

MINORITY REPORT: It baffles how you boys can watch this tripe. It's just a load of men blowing things up. I don't see the appeal. Sylvester Stallone? I can't even understand what he's saying. Silly boy films for silly boys. Ooh, that bald man looks just like your father. -your mother