You all know what week it is. It's the most important week in the history of cinema. This is the week in which the most anticipated and talked-about thing ever to happen in the history of anything ever is finally going to happen. This is the week in which Inception hits cinemas. In other news, there are actually other films in the world, so Joseph "Jay Dub" Wade takes in The Sorcerer's Apprentice, the latest Nicolas Cage vehicle to grace our screens.

Inception; A Review with No Purpose, Because You'll See It Anyway

EXPECTATIONS: The internet has told me in no uncertain terms -- and I'm sure the internet would not lie to me -- that Inception is akin to the second coming of Jesus Christ, and that Christopher Nolan is actually God, sending his film to save us from our own sinful natures. People have been lining the streets, offering up their souls to the Lord for forgiveness, knowing that the release of Inception is the first sign of the rapture. All of this have I heard and more. Most of all, I have heard that Inception is a good film. We'll see.

REALITY: There's always a certain amount of skepticism that can keep you from enjoying a film that you're sick of hearing about before you've even seen it. Inception has been hyped to the point of impossibility, due mainly to the talents involved and a pretty clever marketing campaign. Does it live up to all of that? Almost! And in this case, "almost" is good enough.

Building mysteries upon mysteries in the opening scenes, Inception introduces us to Cobb (Leonardo DiCaprio) and Arthur (Joseph Gordon-Levitt), who are attempting to extract some unspoken secrets from Saito (Ken Watanabe). They do this through an incredibly elaborate process that involves literally sharing and manipulating a dream so that they can tap into his subconscious. Their plan is foiled by Mal (Marion Cotillard), Cobb's deceased wife, who now exists only in his dreams so that she can spoil his day on a regular basis.

Despite their failure, Saito approaches the two men with a proposition of his own; to plant an idea in the mind of a young businessman named Fischer (Cillian Murphy) that will inspire him to dissolve his father's business. In order to do this, Cobb and Arthur must recruit a new team, consisting of Ariadne (Ellen Page), a "dream architect" responsible for the physical realm in which the dream takes place; Eames (Tom Hardy), who is like James Bond, only cooler; and Yusuf (Dileep Rao), an expert in science-fiction sedatives with improbably specific capabilities. On top of this, Saito decides he is going to join the gang on an adventure that will take them into a dream within a dream within a dream. 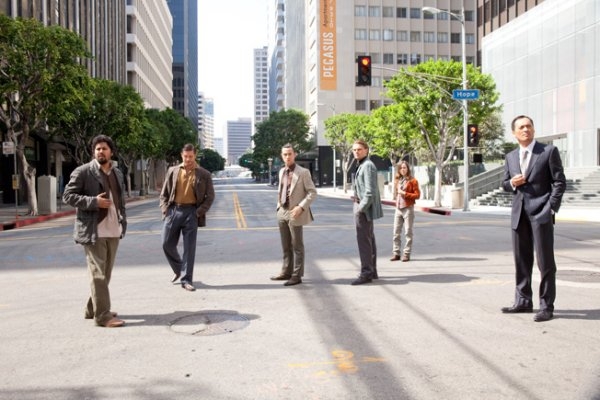 It all sounds a little confusing and overwrought, doesn't it? Well, that impression certainly lasts for a good chunk of the first act, with the audience being invited to think of nothing but what the hell is going on. This leads to a lot of meticulous explanation of the concept, the skills required, the risks involved and the plan of action. I was worried the whole thing would end up running like this, and I started to squirm in my seat a little. That said, when things finally got underway, I was certainly glad that they took the time to explain things. To say that the pace picks up in the second half would be a massive understatement.

As the ball gets rolling and the team gets deeper and deeper into the dreams, rolling toward an intensely action-packed and surprisingly emotional climax, I started to understand what all the hype was about. Inception offers some unique visual set-pieces, mostly based within a hotel that has no gravity (because the dreamers are in free-fall, if you can believe that) and Arthur's attempts to rouse and protect his team-mates, who are dreaming the next layer of the dream within a dream within a dream within however many dreams there ended up being. 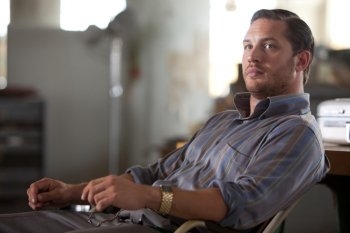 I don't know if you've noticed, but this guy is awesome.The third layer of the dream offers the most entertaining twist of the film, in which Nolan basically decided he was going to make a James Bond movie, only he was going to make Bond a likable character and cast a better actor than Daniel Craig. Tom Hardy is excellent as a kind of top-class dream spy. He's a master of disguise and an arse-kicking ubermensch to boot. Hardy steals the film with ease, thanks to his hugely entertaining performance and his equally huge neck muscles.

Another thing that I found interesting about this film is the lack of any real villainous presence. The closest we get to an antagonist is Mal, who is technically a part of Cobb and a problem he must confront on his own terms. Everybody else, including the target for the actual inception itself, is very likable. You want to cheer for these people, and at one point I even shed a tear; when you consider the mundane nature of the actual task at hand (essentially trying to convince someone that it was his own idea to change his career), that's quite a feat.

I've been giving myself a headache trying to explain the whole dream structure and the twisty nature of the plot, but the film doesn't seem to have these problems. Even though the filmmakers constantly feel the need to reinforce the dos and don'ts of dreamyland - even changing the rules as and when they see fit - it works because it's all delivered with such conviction, and nothing is ever dwelt upon long enough for you to say "Hold on, this guy is a sedatives expert who can make you triple unconscious?" Or "So if you die in a dream you wake up, but not in this particular dream, unless you go the place that you go to when you die in this dream, then you can wake up by dying in that dream?" I might have ruined the whole thing for you there by raising questions you might never have asked otherwise, but it doesn't really matter because the whole thing works by the good old-fashioned virtue of being damned entertaining.

MINORITY REPORT: I don't know what's real anymore, man! Is this a dream? I haven't been this confused since the first time I saw The Matrix. -David "Data Core Devil" del Vacote III