Lament, all you movie-lovers, for January is well and truly upon us. Just to prove how bad January releases can be, we have three absolute disasters for you this week. First up is Movie 43, which may well be the worst film ever made; then we have Hansel & Gretel: Witch Hunters, which exists against all better judgment; and then there's Parker, a Jason Statham vehicle that doesn't understand the appeal of Jason Statham vehicles. Good thing we're rounding things off with John Dies at the End, which pulls ahead and wins Movie of the Week by a massive margin.

EXPECTATIONS: The trailers and posters for this make it look like an "outrageous" version of New Year's Eve: A whole bunch of A-list Hollywood stars all in the same film, but doing stuff that is completely unrelated to each other, only this time with rude words and ironic racism. If I were inclined to be sarcastic, I'd say I was overjoyed.

REALITY: Sometimes, a film comes along that goes beyond bad cinema. Movie 43 is not just unfunny; saying it was unfunny would suggest a simple failure to land a successful joke. No, try to imagine the exact opposite of laughter. I don't mean crying, I mean an inverse laughter. Instead of joy bubbling out of you and manifesting itself in an involuntary vocal exertion, it diminishes and leaves you a lifeless, joyless husk. When Movie 43 ended, it took a great deal of effort for me to rise from my seat and leave. I felt dead. I was convinced that this film had killed me. Of course, it hadn't. I simply longed for death.

Yeah, this is pretty much as bad as it gets.

It's hard to know where to begin. Movie 43 isn't actually a feature film, it's a series of comedy shorts with a framing device. As such, summarising the plot up front isn't really an option. Instead, I'm going to have to cover this blow-by-blow.

Let's start with the framing device, which is kind of a fascinating phenomenon in itself. Apparently, there are two versions of this thing floating around out there; one in which Dennis Quaid plays a screenwriter pitching the sketches as terrible movie ideas to befuddled studio executive Greg Kinnear and one in which a bunch of teenagers go trawling the internet for the titular "Movie 43," which they say definitely doesn't exist but actually does. The latter is the one I saw, the "international" version; I understand that most in America will get to "enjoy" the former. 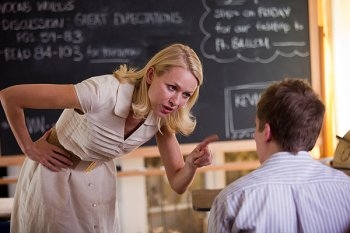 Now, you should know better than to go appearing in this movie.What makes this device fascinating is that it presents Movie 43 as exactly what it is: a bunch of deliberately offensive clips that are better suited to being hidden away on the internet so twelve-year-old boys can find them and think they're sick and awesome and other words that twelve-year-old boys probably say. Meanwhile, adults will be happily oblivious to its existence. It is reinforced to us again and again how uncinematic this whole endeavour is. If you want to make a series of internet videos, there's a good place you can put them that isn't a cinema screen. I think they actually want you to illegally download this film, rather than see it in a cinema. Normally, I'd be opposed to this, but if your target audience is too young to watch your R-rated film, then it's pretty much guaranteed to happen anyway.

The first sketch depicts a date between Kate Winslet and Hugh Jackman. Nothing unusual there, BUT WAIT, WHAT'S THIS? HUGH JACKMAN HAS BALLS ON HIS NECK!! AHAHAHAHAHAAHAHAHA!! Sick, bro! The rest of their date involves Jackman dangling his neck balls into various things, like soup bowls, butter dishes, babies' heads and finally Winslet's open mouth. Eventually Jackman and Winslet just leave. That's it. Good scene, guys. This sets the scene for the entirety of Movie 43, in which slim, juvenile premises are stretched out ad nauseum until the scenes just stop. There are no punchlines here, every sketch feels like an improv exercise at a terrible drama school.

Next up, Naomi Watts and Liev Schreiber tell houseguests about how they've homeschooled their son. But, get this: They want him to have the full high school experience, so they bully and sexually abuse him! Watts and Schreiber actually get to do some acting, taking the roles of both teachers and fellow students in their son's life. Unfortunately, it's still not funny in the slightest, resorting to gross-out humour in scenes wherein the poor lad is forced to make out with his mother and listen to his dad express gay feelings for him. This is made all the more eerie by the fact that Watts and Schreiber comprise a real-life parental couple. Child abuse is hilarious, though, so it's okay. 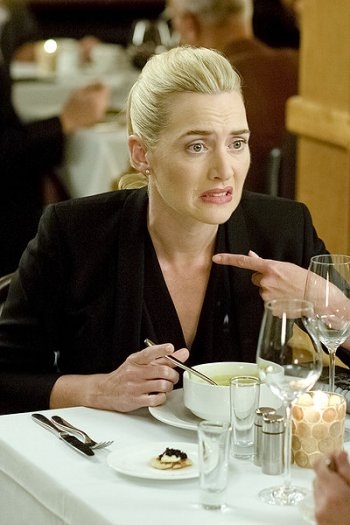 Stick the knife right here, I just realised I'm in Movie 43.There's something I've been debating with myself for some time about which Movie 43 has helped me to come to a conclusion. The issue is one of artistic merit. If your intention is to make something deliberately offensive and you offend your audience, can this be considered an artistic success? In the case of the Crank films I was conflicted, because I hated those films but felt like they wanted me to do so and I couldn't decide if that was something I should be applauding them for.

In the case of Movie 43, I have decided that no, this is not an artistic success because being deliberately offensive is really fucking easy. I could go and fart loudly in a church right now or go to the park and kick a dog and achieve the same artistic goals as Movie 43 (and possibly get more laughs). As the old saying goes, it's not big and it's not clever. It's so easy to offend people, we do it by accident all the time, so art that sets out to do it deliberately isn't exactly plumbing the depths of emotional evocation.

Skipping the sketch in which Anna Faris begs her boyfriend Chris Pratt to romantically poo on her neck; the following one in which Kieren Culkin and Emma Stone say outrageously weird sexual things to each other over a supermarket tannoy; and one in which Richard Gere is a company C.E.O. trying to figure out a way to stop teenage boys from having sex with his new MP3 players that look exactly like naked women - because all these skits are just too funny for words - we come to a scenario in which Batman (Jason Sudeikis) and Robin (Justin Long) are speed dating.

At this point I'm starting to get that same drained, exhausted feeling that came over me while I was watching this mess. But, trudging on: After a brief mock PSA about children trapped in vending machines, which reminded me of this infinitely funnier sketch from Big Train, we have by far the film's biggest misstep, which is saying a lot. In this sketch, Chloë Grace Moretz is on a date with her boyfriend and she gets her first period. This is rather embarrassing and Christopher Mintz-Plasse and Patrick Warburton overreact very slightly. This is seriously scraping the bottom of the barrel. It's not even a joke and absolutely nothing happens to turn the situation into something funny. "I got my period and have to leave now." "Oh God, that's disgusting, but okay. Bye." Hilarious! It's also very clear that this scene was filmed about five years ago, because these actors are all visibly older now. How long have they been sitting on these terrible sketches? 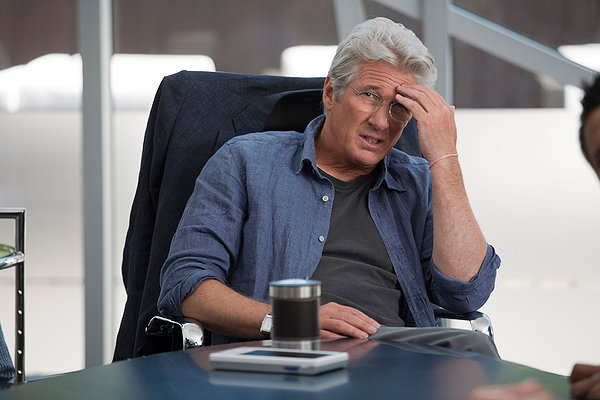 And how about Seann William Scott and Johnny Knoxville capturing a leprechaun (played by Gerard Butler). They punch each other, there's blood, it's sooooooooo funnyyyyyyyyyyyyyyyyyy!!!! HAHAHAHAHAHAAAAAA!!!!!! And then...! And then Halle Berry and Stephen Merchant are on a date (Another date! What an endlessly amusing scenario this "dating" is!) and they decide to play Truth or Dare and end up daring each other into doing increasingly weeeeeiiiiirrrrrd things! Agh, my sides! HAHAHAHAHAHAAAAAAAAAAAAAAAAAAAGHHHHH!!! KILL ME!

Oh, but that's not all! No, sirree! The next course in our budget-taster menu is Terence Howard telling the first-ever all-black professional basketball team that they will win because being black makes them inherently better at basketball. "You're black, they're white," he says, four hundred and fifty-six times. And that brings us to the final sketch. The one crowning glory in this mudpile, right? No, this one features a cartoon cat buggering itself with a hairbrush whilst watching Josh Duhamel have sex with Elizabeth Banks. And so, it ends.

I stare, wide-eyed and slack-jawed at the screen as the credits roll. I look down. There is my lifeless body beneath me, now an emaciated husk. It is time to depart the physical world, Movie 43 exists there and for that reason, I no longer desire to. Oh, you wanted a rating? I'm sorry, but Movie 43 defies ranking. It is not a film. It is all the ugliness of the world given form. You don't just not laugh at Movie 43, it is the end of laughter.

MINORITY REPORT: I thought the Terrence Howard sketch had some potential as a sly poke at his character in Red Tails, but for that to work, people would need to have actually seen Red Tails.- Martin R. "Vargo" Schneider