We finally did it. We broke Jay Dub's brain. How else can you explain his actually liking Salt? Not the seasoning; the new Angelina Jolie-starring action extravaganza. Let's find out exactly why ...

EXPECTATIONS: Now is the time in the summer movie season when all the heavy hitters have come and gone, and we're left with a select few stragglers looking to capitalize on late-summer malaise. Considering the generally poor season we've had this year, I'm ready for an unassuming action flick to wreak some havoc and crack a few skulls. Salt looks like it will do just that, despite having one of the most unhelpful titles imaginable.

REALITY: Like The A-Team earlier this summer, Salt is a great throwback to the action movies of the '80s and '90s, where it's okay for the plot to get a little bit crazy at times so long as the action stays frequent and engaging. Unlike The A-Team, though, Salt is a mostly laughless affair that is completely convinced of how badass it is, and it makes up for its utter lack of comic relief with even more shootouts and chase scenes. I say "mostly laughless" because there's one scene where Angelina Jolie disguises herself as a man and, well, she's not really fooling anybody.

Salt is made up of one part 24, one part Jason Bourne, and a dash of Red Dawn. Basically, CIA operative Evelyn Salt (Jolie) is accused of being a Soviet sleeper spy by an ex-patriot Russian agent, and she subsequently goes on the run from the US government (Liev Schrieber, Chiwetel Ejiofor) in order to clear her name ... or does she? Saying any more would almost certainly give away any surprises the movie might have, but suffice it to say that there are about fifteen double-crosses and more than one assassination attempt along the way.

Where Salt really succeeds is in simply being a well-crafted action movie. Sure, there is a ridiculously unhealthy dose of Cold War paranoia coursing through the movie's veins, but when it comes time for guns to be fired and chases to go afoot, Salt delivers the goods. The moment Salt jury-rigged a cannon out of cleaning chemicals, a fire extinguisher and a chair, I knew things were on the right path. Angelina Jolie gets her fair share of stunts and action sequences, and she's able to pull them off while looking sexy, menacing and slightly out of her mind. 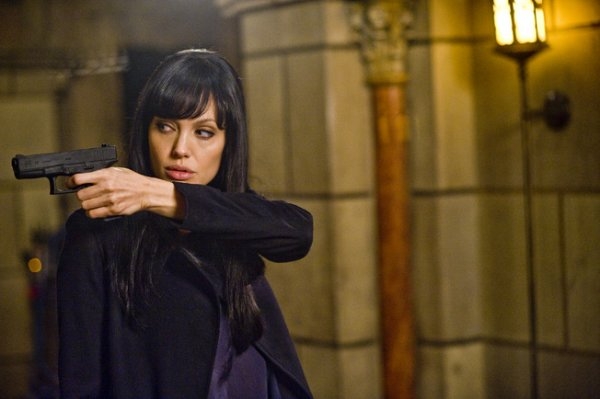 There is a dark, twisted Russian plan against the USA in this movie, and as the movie wears on and that plot becomes clear, it also becomes clear that Russia's evil plan is ballsy and ludicrous. The plan is labeled "Day-X", which is sort of like calling D-Day "Bad Stuff Day". Not that it's a particularly bad codename for a plan, but it sounds exactly like something a non-English speaker would make up. The same goes for the name Evelyn Salt. Whether she's actually a Russian spy is something I'll leave you to discover, but it's another one of those names that could have only been made up by a non-English-speaking spy. It's meant to sound like a codename while also sounding vaguely American. Because nothing is more American than baseball, apple pie and sodium chloride.

Things like that make Salt seem a little insultingly xenophobic. The Cold War ended 20 years ago, and yet Russia still winds up being the cinematic whipping boy. I mean, I guess you can do that after you've won the Cold War, but bragging rights only last for so long. We live in a more politically correct era now, and you'd conceivably piss off just about any country by making them the villain in a movie like this. So why are we still going after Russia, aside from the fact that it still totally works? Why not someplace small like Lithuania? They'd make dastardly villains, I'll bet.*

Every single ridiculous plot twist or contrivance that pops up in Salt comes courtesy of screenwriter Kurt Wimmer, director and scribe of sci-fi/action rip-offs like Equilibrium and Ultraviolet. Had he been behind the camera, I have a feeling this movie might have come off looking and feeling much like his earlier work. He's not the most original screenwriter working in Hollywood (actually, he's closer to the bottom of the list), but with Salt he's managed to come up with a story that's not quite so derivative. It's just original enough to feel new while still playing around with the usual set of action movie clichés that he loves oh so much.

Director Phillip Noyce took that screenplay and spun it into gold, making even a foot chase between Angelina Jolie and a sluggish-looking Liev Schrieber seem thrilling and interesting. If Salt has a much steadier visual style than we're used to seeing out of action movies, it's because Noyce cut his teeth on this stuff two or three decades ago (Patriot Games, for example). He knows damn well how to make a competent action thriller, and this one definitely doesn't disappoint.

Come to think of it, this movie couldn't possibly have come out at a better time. Last week's US/Russia spy swap makes the events in this movie seem all the more plausible. In fact, the timing seems a little too perfect if you ask me. Someone over at Columbia Pictures either deserves a hearty pat on the back for their clairvoyant scheduling powers or a full background check just to make sure he is who he says he is. You can't buy that kind of media exposure. Unless you can... We're watching you, "Steve".

*I apologize to all our Lithuanian readers. We love you, the most! No, really!

MINORITY REPORT: There was a time when I, too, was accused of being a Russian spy. This came about during a time when I was particularly fond of drinking Vodka straight from the bottle and had even learned a Russian phrase that I was equally find of yelling into crowds of military types. This, incidentally, was during my brief trip to Washington (a place to which I am not allowed to return). It turns out that this Russian phrase translated roughly to "We are all brothers in communism, death to the United States." It is obvious how the misunderstanding began, but I cannot for the life of me fathom how I could have come to learn such a phrase. -Montague "Legally Sane" Smythe