Saturday, May 07, 2005 by Seth "Terrorsaurus" Knisley
Mr. Morris was admitted to the office of Dr. Richard Belding, complaining of dime-sized sores on his face and back that were sensitive to the touch and released a white discharge when "popped". Patient's history revealed no allergies. Patient was prescribed minocycline for oral use and adapalene gel (brand name "Differin") to be applied topically. Follow up scheduled for six weeks from today.

Oh great let's all gawk at the new guy 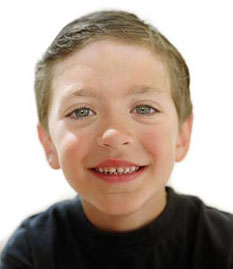 Although this youngster isn't the one that inspired me personally, they do have one thing in common: Their parents resent them for being born male.

Today's update was actually inspired by my friend's 11-year-old brother, a bright young man with a wonderfully dark sense of humor, a tendency to behave antisocially, and what I'm almost certain is the worst case of ADHD ever to bedevil the field of child psychiatry. Anyway, after stealing his idea about magic bums and turning it into a tiny little short story with a lot of heart and a real humdinger of an ending, a vacancy opened on the front page. I submitted it, along with some other stuff, and Zack took a shining to it, and asked if I could rewrite it so that it was long enough to go on the front page. I initially told him to get the fuck out of my face with that shit, but he promised to give me some food stamps and pay off all my DUIs so here I am.

Breaking up blocks of text with whitespace and huge headings

All joshin' aside, it really is hugely flattering to be asked to write for a site like Something Awful. I've been reading it every day for the last 4 years or so, and it never gets old to me. In addition to enjoying SA just for being funny, I respect it for its integrity. Lowtax refuses to insult his readers by covering the site with noisy flash ads and annoying popunders. Additionally, he refuses to employ women in all but the most menial of capacities, and I think we can all take a lesson from that. I'm gonna cut this Daily Dirt a little short today because a) I have nothing interesting to say and b) my attempt to cure this hangover by waking up early, physically exerting myself, and eating an ungodly amount of cheap seafood hasn't been very encouraging, and it's probably better if I just call it a day, but before I go...

Did you either love or hate today's front page update? SUPERLATIVE! Feel free to send me an email outlining exactly why and how I deserve to lose my genitals. Be sure to include the phrase "Loved it!", "Hated it!", "Ambivalent!", or "S0uth B3ach D1et xxrxazxkjh" in the subject line. BYE.