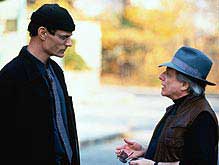 Harlan Ellison, shown here wearing a blue hat and (probably) talking about UFOs or time travel or mummies or something. Those are all metaphors for human spirituality.

Harlan Ellison is widely recognized as one of the most influential and prolific science fiction authors of this generation, having contributed to over 1700 motion pictures, stories, and motion stories, which are like normal stories except he has to write them on a locomotive traveling to Akron, Ohio. His 50-year career has produced countless essays on the human condition, alienation, and the rampant ills of society, resulting in Ellison's reputation as one of the few science fiction writers truly in touch with emotion's dark side. Many critics have compared his astute observations to that of famed author Stephen King, particularly after his release of "Maximum Overdrive" or the passionate masterpiece "The Langoliers," which if you'll recall, starred Cousin Balki.

Unfortunately, Ellison's close connection with such raw emotion has left him a little, well, grumpy at times. He is well known for his various anger-fueled outbursts, reacting like a cornered cobra spitting venom at every potential target each time his frustration bursts through its boiling point. Although Mr. Ellison may be one of the modern legends of the otherworldly science fiction genre, his anger management issues are deeply rooted in reality, frightening many journalists away from exposing the "real" Harlan Ellison to his broad fan base.

I am not "many journalists," either in integrity or personal aroma. I am not dissuaded by such fear, and Harlan's intimidation only makes me want to dig deeper to reach in and grasp a handful of justice from his magician's hat of lies. Ellison's mythical tirades of seething hatred will not deter me from sharing the truth about this man, even if it results in him calling my parents and threatening to break my face against a coffee table until I am very dead. A noted scholar once remarked, "there's nothing more infuriating than the truth," so I will take this advice and spend today's update writing nothing but complete, bald faced truths about Mr. Ellison and his career, some of which may shock and alarm the more shockingly alarmist readers out there. Ladies and gentlemen, please prepare yourselves for a ride through the REAL Harlan Ellison, the one he is afraid to show to the rest of the world because deep in the back of his mind Harlan Ellison knows that he can't beat up the entire world, although I'm sure that won't stop him from trying. 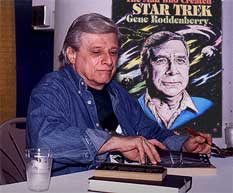 Although many people know Ellison wrote episodes for TV's "Batman," "Star Trek," and "Babylon 5," many of his most hardcore fans are not aware of his involvement with the TV series "Hee Haw," which Ellison worked on under the pseudonym "Dancin' Danny Zippers." Ellison was responsible for roughly 23 skits over a five year time period, including a particularly controversial episode starring Gordie Tapp (as Cousin Clem) and Archie Campbell (as Space Judge) entitled "Space Court: The Case of the Space Negro (In Space)". Here is a brief excerpt from this episode:

Cousin Clem: "So ah was sayin' judge, ah was sayin' judge, this here colored folk done stole mah prized watermelon from this here patch!"
Space Judge: "I do declare! As Space Judge of space, I rule in your favor! I now pronounce you and the Space Negro man and wife! You may now kiss the bride!"
Cousin Clem: "Man an' wife?!? I ain't marryin' no Space Negro!"
Space Negro: "You ain't no prize yaself, massa'!"

CBS was forced to pull the episode after one of Hee-Haw's primary sponsors, "Doc Waffle's Home Astronomy Kits," complained that their sales would drop due to "honest country folk being afraid of looking into the sky and seeing space negroes." 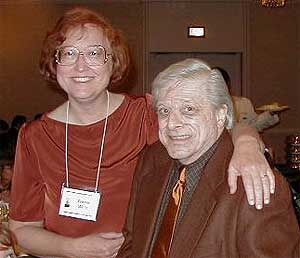 Harlan Ellison, shown here proving he's so tough and loud and noisy that even Death fears him, or at least is afraid that by taking him, Hell's property value will drop by half.

Ellison was arrested at a McDonalds around November of 1987 for assaulting Troy Vincent, a McDonalds employee dressed as Grimace. According to witnesses, Troy approached Ellison and offered him a coupon for a free apple pie, to which he replied, "your pie is baked with damned lies, you revolting rancid purple tub of ooze. Your pathetic bastard god lies here between my knuckles, kiddo." Ellison immediately began punching Grimace in the face and shouting colorful insults in bold print.

Despite his attempts to voice his adamant displeasure with the Internet and people who use it, Ellison is an avid online junkie and has lurked on the IRC channel #teenage_divas under the name "hOtlEgs2000." Proof can be found in the following chatlog:

Nobody really knows much about Ellison's wife, as he refuses to speak openly about her in public and she is unable to do the same since Ellison slapped the vocal cords out of her throat in late 1996. Rumor has it that she plans on filing for divorce and moving out after her sixteenth birthday. He has been married five previous times, each time filing for divorce once his wife's face was covered with callouses and therefore no longer pleasing to slap. 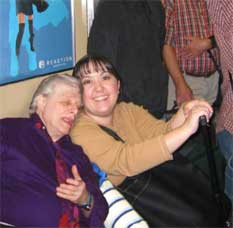 Harlan Ellison, shown here "sleeping one off" in a crowded subway.

Ellison has a secret room in his house entirely devoted to Star Trek memorabilia and collectibles. His most prized possession is a Denny's dinner plate which was signed by Gene Roddenberry reading, "Dear Harlan, keep on trucking, some day you'll get the hang of this whole writing thing, sincerely Gene." Rumor has it Harlan still hasn't washed this plate to this very day, hoping that the mold and mildew growing from it will form into a giant fluffy ball of brown spores which he will name "Darvin" in memory of his favorite Star Trek episode, "The Trouble with Tribbles." If you ever get a chance to meet up with Ellison, be sure to ask him about his love for Star Trek and how much he enjoys being a huge Trekkie. He'll probably give you a big wet sloppy kiss for being so up front about his secret passion.

Through a series of mixups and internal communication errors, Ellison was invited to be a guest on "Sesame Street." Security guards and police from neighboring cities were called in when Big Bird asked Ellison the provocative and inflammatory question, "hey Harley, what words begin with the letter 'G'?" at which point he began trying to light the set on fire while shrieking profanities at the puppeteer animating Slimey the Worm.

Although he despises TV in general, Ellison has agreed to appear in three television shows which he felt were so intelligent and closely resembled perfection that they deserved his personal appearance or voice acting. These shows were "Babylon 5," "Psi Factor: Chronicles of the Paranormal," and "Phantom 2040." The "Psi Factor" episode he starred in, "The Observer Effect," won numerous awards for excellence in the field of special effects, mostly due to the director's ability to disguise host Dan Aykroyd's huge, huge gut as surrounding scenery like milk tanks and sports-utility vehicles. As for the plot of that particular episode? Well nobody knows anything for sure about it, as no one in the history of the universe has ever successfully watched an entire episode of "Psi Factor," including all its writers, actors, and directors. I'm guessing it had something to do with UFOs and aliens and that guy who wears a suit and looks as if his face was carved out of knives. I don't even know what the hell "Phantom 2040" is, but I think "Babylon 5" was the show about the space station in space with the space aliens who had funny shaped heads, although not funny shaped heads like the funny shaped heads in "Star Trek."

If you see Ellison in public and notice him drop a dollar onto the ground, do not pick it up and approach him explaining that he must've mistakenly let go of it or else he'll rip the dollar from your hands and attempt to paper cut your throat open while calling your mother a whore.

Harlan, if you are reading this page from your Star Trek themed-computer desktop, please don't misunderstand today's update and think that I'm launching some personal attack against you. I just feel that your fans out there, the folks who voluntarily buy the nine books about time traveling robot magicians you release each month, deserve to know the truth about you and your life, and I welcome any phone calls from you explaining your humble opinion on these matters. I know my credibility as a serious Internet journalist is at stake each time I delve into another fact-finding biographical update, so I can only pray you take your "professional writing" deal just as seriously as I take my Internet integrity.