Should you watch NHL or NBA Playoffs?

Debating whether the NHL or the NBA have better playoffs is like fighting over Hardee's or Carl Jr. You know there are superior options, but you're kind of stuck with what you got. It's not so much about which sport is better than which sport manages to humiliate itself slightly less. Let's see how they measure up.

Fact that sounds more likely to belong to the other sport
NBA: An owner was surprised when non Caucasian people came to watch a game.
NHL: There is one Canadian team in the playoffs.

Playoff games are relegated to which forgettable channel
NBA: TNT, where games are played between reruns of Charmed and Smallville.
NHL: Each series can be found on NBC Sports aka Versus aka OLN right after a three hour special on bull riding. If not there, check CNBC, a channel that has been around since 1989 without anyone actually knowing what the C stands for.

90's song most likely played on repeat during every commercial break
NBA: STRIKE IT UP!
NHL: BREATHE IN! 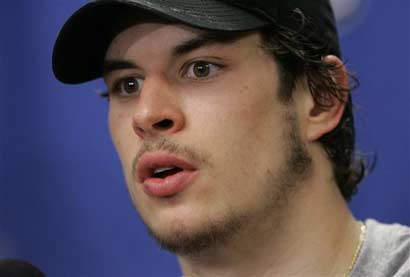 Amazing completely true statistic
NBA: Half the teams were actually trying to tank the season, but managed to make it into the playoffs after winning a total of seven games.
NHL: Starting in a playoff game is the highest honor of the Nordic people aside from appearing as a Game of Thrones extras.

Really good question with no answer
NBA: Do the last two minutes of the game have to last two hours?
NHL: It's 75 degrees outside, why are they still playing hockey?

Worst team name
NBA: Golden State Warriors.
NHL: Blue Jackets. This comparison is only here to mention that "Blue Jackets" is the worst team name in any professional sport. Ever. No one, not even the few people in Columbus capable of reading, know what it means. A bumble bee wrapped in civil war roleplay? Sure, okay.

When does ESPN coverage start?
NBA: Right after a rerun of NFL Live discussing which football team is more likely to win next year's Super Bowl given possible changes in the draft order.
NHL: If it's a slow day and Sportscenter can't show the top ten diving catches again and Tony Romo didn't tweet anything and there's no arena football and collegiate women's pistol shooting is on break, then the answer is still never ever ever ever.