The Weirdest West Art of Deadlands

Deadlands was a quintessentially 1990s game that combined the wild west steampunk of something like the TV show Wild Wild West (the film version came after Deadlands) with lots of zombies, skeletons, and Lovecraftian horror. And samurais. And dinosaurs. And...well, okay, by the end of its original run, it was turning into Rifts: Cowboys. But, it originally had a concise theme of the wild west meets the undead and a creepy skeleton cowboy aesthetic to go along with it. 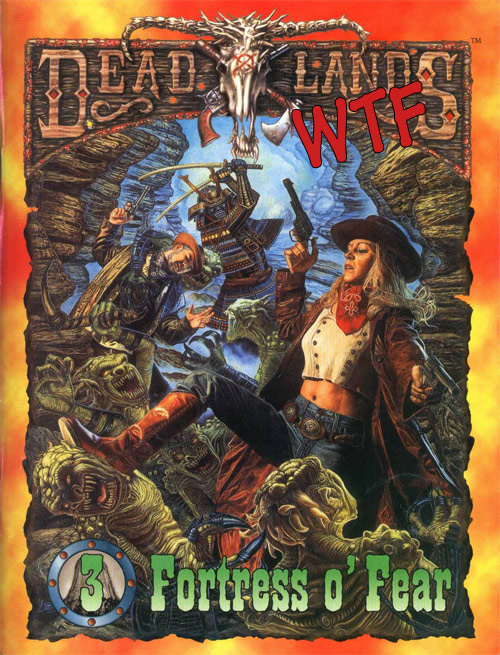 Steve: The 1990s loved exposed midriff so much they found a way to give it to a Texas Ranger fighting goblins and samurais in a cave.

Zack: "Yeah, I need a cowboy sweater. Nope, smaller. Nope. Smaller. That's the smallest you got? How about baby sizes."

Steve: "I'm headin' to Japan to fight some goblins and I want those little buggers to know I do my crunches."

Zack: If you're lookin' for the Fortress o' Fear, you're gonna wanna hang a left at the Barrel o' Laughs and then go right on past the Land O' Lakes.

Steve: Do not stop and do the thing where you put her knees under the butter.

Steve: Where you give the Land O' Lakes Indian boobs.

Zack: Is this another one of your dreams?

Steve: I wish. This is cold, hard reality. This is butter truth. Look it up.