A picture from Majestic's site. WOW! It uses scanlines and x-rays of some guy's mouth! IT'S HIGH TECH!!!

As many of you hardcore gamers out there are painfully aware of (NOTE: referring to somebody as a "hardcore gamer" in public usually elicits the same general response as calling them a "professional sperm sculptor"), EA recently released a demo of Majestic, their game promoted with the tagline "it plays you." Although this phrase was shamelessly ripped off from the classic 1980's science fiction flop "The Stuff" starring Paul Sorvino as "Mr. I Hope Every Last Single Copy of This Film is Destroyed In a Horrible Inferno," I think it's safe to assume that EA didn't steal too many ideas from this cult non-classic. For example, there aren't any alien blobs of fungus that a majority of the American public decides to constantly consume for no explicable reason besides the luxurious side effect of becoming a braindead murderous zombie. I'll let all you witty foreigners chirp in with "but Rich 'Lowtax' Kyanka, all Americans are already braindead murderous zombies! Ha ha! I am single-handedly responsible for 96% of my country's 'raw hilarity' export!" Then I'll lean back and laugh when I read the next CNN.com report detailing how your country's capitol just burned to the ground after rioting soccer fans decided that igniting other fans wasn't enough to fully express their discontent of losing a championship game. Although I can't immediately determine what soccer has to do with EA's Majestic, I'll assume it's very deep and meaningful, just like the last time I was writing about Australia's economy and I ended up detailing the night I drank too much vodka and fell into a drainage ditch.

But anyway, back to EA's Majestic. According to their crack PR division, the game is promoted by the following exclusive features:

There are some unique effects scenes with the Stuff crawling out of windows, being vomited up by people and dogs, of Bloom and Marcovicci hopping between metal tubs floating in a whole roomful of Stuff, and a wholly remarkable scene where Moriarty and Marcovicci go to sleep in a hotel room where the pillow and then the entire mattress comes alive, blasting forth Stuff.

Upon further investigation, I have realized that my copying and pasting skills are not "up to par" as the "kids" these days say, because all kids are fond of using unpopular phrases and unnecessary quotation marks. They also like to drag race and wear hoop skirts. One game that doesn't like to drag race or wear hoop skirts, however, is EA's Majestic, which is billed as:

...an episodic online entertainment experience set against the backdrop of a grand and sinister conspiracy -- an unfolding mystery adventure that uses the Internet as a canvas for its story, weaving you through both real and fictional experiences in real time. Highly personalized and naturally paced, Majestic tailors your experience specifically to you as it dynamically changes the content of Web pages, emails, faxes, voice mails and chat conversations in order to immerse each player at the very heart of a developing story.

As you can tell, this game fulfills the wants and needs that every human being has asked for since the days of Non 3D Donkey Kong and Not-So-Super Pitfall, namely the need to interact with a game without using the boring old keyboard, mouse, joystick, and idiotic Carpel-Tunnel causing Nintendo Power Hand Molester Death Glove. Yes, that's correct, Majestic is described as a game that transcends a single form of media, floating to the top and creating a marshmellow-flavored desert topping of immersion for all players involved, raising the cholesterol level of excitement and clogging the arteries of mystery and intrigue. While I'm all for revolutionary and groundbreaking advances (for example, I cheered and applauded a lot when I learned of Crystal Pepsi's release), I couldn't help but feel a little... hesitant... when trying to embrace Majestic's release. Why? Well, this paragraph for starters:

You don't just interact with Majestic, it actively calls, emails, faxes and chats with you whenever the need arises, any time, anywhere. You're never quite sure when the plot will advance, a character will need your help or a new event will unfold, but it always transpires in real time. 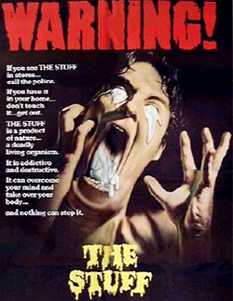 The tagline from "The Stuff" was originally "are you eating it, or is it eating you?" WELL UPON FURTHER CONSIDERATION, MAGIC MOVIE POSTER, I THINK IT IS IN FACT EATING ME!

First off, I don't like being called, emailed, faxed, or chatted with. My phone calls consist entirely of people who either want me to buy their newspaper, buy their long distance service, or pay bills for my existing newspapers and long distance service. My email box is full of men hitting on Jeff K. and women cursing out Cliff Yablonski. The last fax I got was 97% solid black ink with the only visible words reading "CHONK TELL LOOGER???" I won't even go into how painful the experience of going visible on ICQ is for me, as that would take an entire article and a saltwater enema to accurately describe the inherent pain. So the thought of having MORE phone calls, emails, faxes, and chats dumped upon me seemed nearly as exciting as the time I purchased a rental car and found an entire Swanson's TV dinner rotting in the back trunk. However, in the pursuit of journalistic research and scientific study, I decided to test the Majestic game / program / series of crank calls for an entire day. Here is the journal I kept during this trial period. I hope you find it helpful in learning more about Majestic. I know I sure as hell didn't.

3:32 am: Phone rings. I fall out of bed, rush across my bedroom and pick it up. Voice on the other end is heard breathing deeply, wheezing, and mumbling about how their Senator has sent two hitmen to track them down and kill them. They claim to have discovered the Senator's covert plan to work with the NSA and secretly monitor a majority of Americans in the privacy of their own homes. I realize my mother is very drunk and advise her to go back to sleep, shortly before hanging up on her. She calls back five minutes later and accuses me of stealing her silverware.

9:20 am: I get an email from "SINISTERCONSPIRACY1029@HOTMAIL.COM," explaining I am in "imminent danger" and need to contact him as soon as possible. I am also given instructions regarding how to increase my penis size by six inches and save up to 50% at Benchmark Print Supply. I turn down the print supply offer.

11:39 am: A fax comes through, claiming I "know too much" and will soon suffer a "serious accident" which will kill me or at least seriously impair my ability to live. After examining the note more closely, I realize it's actually from Debra, the HR Nazi Zombie Demon at my place of work. When I question her about the message, asking what she was trying to tell me, she responds by throwing a handful of pencils at me and spitting Mountain Dew all over my desk. If anybody out there is looking to hire a HR person, DON'T hire Debra for God's sake. I would give you her last name, but I seem to have mentally blocked it out. It's probably "Diabla Blanca." Now that I think of it, I'm not even sure how her first name is spelled either.

2:21 pm: While dining at Larry's, my favorite restaurant / bar in downtown Seattle, the Asian waitress approaches me and mumbles "senator, senator." I ask her what she means and she responds by pointing at my barstool and the brown mess I see smeared all over it. "SIT ON TURD! SIT ON TURD!" she screeches while swinging a broom at the passed-out drunk under our table. At the end of my BLT meal, she hands me the check, which comes to a mysterious and intriguing total of $7.38.

6:09 PM: I arrive back home and check my email. I receive the following message:

Attached as the word document is my ICQ prank. I think it's pretty damn funny and I hope you like it. I tried formatting it in a way that would make your life easier but just in case I also attached the two text files to serve as hard copies. Enjoy.

*Sparkle* - no your information!!!! you know your stats!

Solaratov - What are your stats!! Hello!

Solaratov - Hello hello! Please to be giving me stats!!

Solaratov - I see you are from Canada! Fantastic! I own bacon!

Solaratov - Please to be giving me bacon! Hello!

I begin to brainstorm what Majestic could possibly be trying to tell me through this chat log, but I am interrupted when I receive an email from a reader submitting his ICQ prank to my site. It's significantly worse than Majestic's.

11:22 PM: I receive an email instructing me to check my fax machine for a new message. The fax machine tells me to wait by my computer until I get a chat request. The chat request advises me to prepare for a telephone call from an "inside source" with "important information." I wait for 30 minutes but no call comes through. I find out later that Deborah told her friends to call, fax, and email me so I would be distracted while she steals my car and most of my music equipment. She undoubtedly sold it all to buy heroin which she injects directly into her eyeballs.

So that's the diary of my first day "playing" Majestic. I have to admit that EA did an excellent job of pulling me into a world full of chaos, confusion, and deceit. Actually, now that I think about it, I never got my confirmation notice telling me that I was subscribed to their Majestic game. Heck, I don't even remember filling out a form to play the game. The miracles of interactive technology indeed!