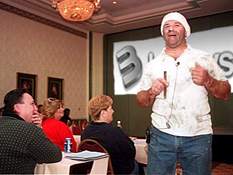 Ruaholoajoiahaloloahoaey, Finland - In a startling move that surprised many industry executives, Bitboys CEO Shane Long announced a patent infringement lawsuit had been filed against Bitboys - by his own company.

"Bitboys' lawsuit against Bitboys seeks an injunction against any manufacturing, selling, or importing any graphics cards utilizing the XBA (Xtreme Bandwidth Architecture) technology. We allege that Bitboys has infringed on the following Bitboys US patents: No: 19,283,124; No: 20,125,663; No: 20,588,892; and No: 21,219,986," Long recently stated in a press interview held in the meeting room of the "Sunny Days" Akron Airport Inn. "We will not idly sit by while our technology is being misappropriated."

The Bitboys announcement follows a lawsuit filed by nVidia against competitor 3DFX, claiming the rival company infringed upon proprietary hardware created by nVidia. Much like the similar lawsuit, it appears that the ultimate goal of Bitboys is to ensure that their target ceases production of all video cards.

"Let me make this clear: Bitboys welcomes competition. We feel that a strong marketplace is able to support many different video cards and video card manufacturers," explained Long. "However, our company, Bitboys, will do everything in its power to make sure Bitboys does not infringe upon our copyrighted patents and cutting edge technology. If we have to shut down their entire line of video cards and video card manufacturing, then that is what we must do."

Investors Conventum Oyj, who invested roughly EUR 3.7 million (US 3.3 million dollars) in Bitboys, is reportedly "extremely furious" over the lawsuit. Ari Jokelainen, president of Conventum Oyj, expressed his displeasure over a phone interview with SA.

"We've been calling Bitboys almost every other day, asking where our graphics cards are. They just keep telling us, 'next weekend, dude. Really. We promise.' Then I hear somebody laughing in the background and the phone goes dead. I can understand if they're having phone problems, but why is somebody always laughing when I call them and inquire as to what our million dollar investment has bought? All they've given us so far is a glossy brochure which has a bunch of various-colored bar graphs and the word 'MEGAPIXELS' in huge letters," complained Jokelainen. "And look at their website. They've got quotes like 'The Infineon eDRAM process uses a special trench capacitor for the DRAM.' What does that mean? What the hell is a 'trench capacitor'? What is eDRAM? I ask them questions about this technology and all they do is send me more glossy brochures with bar graphs. I think we might have made a serious mistake investing in these guys."

Industry analysts seem to agree with this claim. Peter Direlinchov, PR spokesperson for TCS Enterprises, recently expressed his opinion regarding the lawsuit. 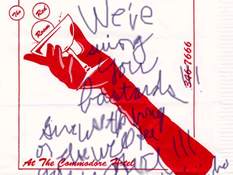 A copy of the alleged Bitboys lawsuit against 3DFX.

"To be honest, I think Bitboys just doesn't have anybody to sue. nVidia, 3DFX, and ATi are all throwing lawsuits at each other, but what can Bitboys do? They want to seem like a real, legit company that can compete with the 'big boys', but who can they sue if they haven't ever actually released a product or have a set date of when they will release one?" asked Direlinchov.

A conversation with 3DFX's Brian Burke seemed to confirm this belief.

"Some guy called me up a couple months ago, asking if we were using XBA technology. I told the guy no, and then he asked if 3DFX was planning on using it. I told the guy no again and asked who he was. He said, 'your mother' and then starting cackling and hung up. I didn't hear from him again until we were about to release the Voodoo 5 card, when I got a phone call from somebody asking if the V5 was going to 'make stuff all blurry.' I said, 'yes, it will ship with anti-aliasing included' and the guy shouted, 'I CAME UP WITH THAT IDEA YEARS AGO YOU STUPID, STUPID LITTLE FREAK!' and hung up," Burke admitted while sticking needles into a doll labeled "Derek Perez". "We received a lawsuit from the Bitboys office about a week later, but since it was just a few illegible words scrawled on a bar napkin, we didn't pay too much attention to it."

"We intend on following this lawsuit all the way through and making sure justice is served at all costs," Bitboys' Long concluded at the press conference, shortly before the janitor walked in and unplugged his microphone. "If we have to go so far as to ensure Bitboys will never, ever release a single product that can never live up to the lofty and unbelievable benchmarks that it was billed to have, so be it."