Ace legal wiz Leonard "J." Crabs has more than his fair share of successful legal battles under his belt... as well as many other things. As the official legal force of our site, Something Awful, Leonard has decided to generously donate his precious time to maintaining a weekly / biweekly column that tackles all your toughest legal issues. Feel free to drop Leonard a line with any questions about the law you may have!

My husband has been in and out of the hospital for several years, but his condition has recently deteriorated and now he will require expensive specialized daily treatments. Our health insurance company is unwilling to pay for his treatments, even though our doctor says these treatments will help my husband’s condition. What can I do to make sure our insurance company pays for these needed treatments? 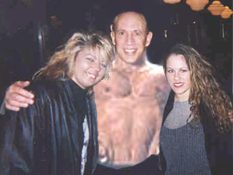 Here I am with a couple of my fly legal bitches. I had convinced them I was International Superstar David Hasselhoff.

You do have certain insurance rights. However, these are primarily based on the procedures and coverage provisions of your insurance policy. In this instance it is not possible to answer your question without reviewing the policy and knowing more about the nature of your husband's condition and the proposed treatment. However, I have found that most illnesses fall into three main categories:

1) "Coughing Up Lots of Nasty-Ass Crap." This condition occurs when there is some kind of infection in your husband's lungs (in medical terminology, his "medulla oblongata"). This causes him to cough up all sorts of weird crap like snot and hairballs. The doctors have to spend a lot of money giving him expensive medicine that either stops the crud from coming out of his mouth, kills the infection, or kills your husband. The first two options are the most preferable unless you don't really like your husband.
2) "Hey, My Legs Are Gone!" This unfortunate medical condition is the result of having your legs separated from the rest of your body. While there isn't a real "cure" for this, the patient does have an excuse to get drunk and curse a lot, even moreso if he was an Olympic runner before the accident. Your best bet is to sell his life story to the Lifetime network, where they will make a movie and air it in between "Where's My Baby?" and "I Think My Husband is Cheating on Me, Part 1283."
3) "Failure to Live." Most often caused by death, doctors and scientists have not found any cure for this problem. If this is indeed the illness afflicting your husband, you should probably be asking something about life insurance rather than medical insurance. Or death insurance, I guess. Do they have such a thing?

Have you tried experimental drugs and surgery? I'm not talking about wimpy stuff like going to the hospital and signing a form for some new procedure, I'm talking about just getting a whole bunch of stuff together, mixing it into a bowl, and then injecting it into his arm. I'm no medical expert, but I've seen some of the stuff they have in test tubes on that TV show "ER", and it looks like Windex or Liquid Plumber. Just go to Wal-Mart, buy some industrial solvents, and empty them all into a big bowl. Yank open your husband's mouth, dump the crud in, and voila, instant homegrown cure! I mean, it's not like he can get any worse or anything.

I actually represented a client in a similar situation, both for the insurance trial and her subsequent murder charges. She were found not guilty because I was able to convince the jury I could turn into a 500-foot leprechaun that could shoot fire out of my nipples. I casually mentioned this in my closing argument while listing the street addresses of each and every juror. This is a tactic I like to call "Smoking the Pork Snowman." One time I was in the woods and I saw the Yeti!

My wife and I are separating and probably will file for divorce. Neither of us has moved out of the house yet, but we're constantly arguing about how we're going to handle our 6-year-old daughter. I am afraid that I will lose my rights to see her and be with her just because I am her father rather than her mother. What do I need to do to keep my daughter and I together at least part of the time?

In the information you provided, you indicated that a divorce action is pending and that you have joint custody. You also mention that you and your wife are separating, probably will file for divorce, and are living in the same house. Therefore, I will assume from this information that while you feel a divorce is "pending", nothing formal has yet been filed with the court and there are no temporary orders of any kind.

I would advise taking your child and wife onto some fancy courtroom television show like "Judge Judy" or that one show about the hip hop judge from the inner city hood. I think it's called "Yo! MC Judge!" or something. Anyway, take them onto the show and plead for the mercy of the court to give you sole possession of the child. Then make slanderous remarks about your wife and begin crying when the judge yells at you (and they will). TV show judges like nothing more than raw emotion because it really boosts the ratings, so try and be as emotional as possible. Start off the trial acting like a nice guy, then suddenly throw wild accusations at your wife. Claim she pays bikers for sex. Accuse her of being involved in a Satanic cult. Lie about the time you went on a vacation to Mexico and she participated in the live donkey show. Saying all these untrue things about your wife will allow the judge to yell at you and accuse you of being a terrible father for saying such horrible things in front of your idiot kid. The camera will pan to the audience and show some lady shaking her head sadly at you. Then the judge will rule in favor of your wife and you will probably never be allowed to see your child again. However, here's the hook: when the bailiff is leading you out of the courtroom, you should use a time machine to travel back in time to BEFORE the trial took place, grab your kid, and then time travel to 200 years in the FUTURE! Everybody will have forgotten about your stupid little custody battle by that point and you'll be a free man! Just watch out for the killer robots with claws! They'll tear your fucking head off!

I had a case like this back in 1968. Know what I did? I filled up my car with polyester pants, put a brick on the acceleration pedal, and drove it into the courthouse! The defense never knew what hit them! Literally! Then I had sex with the judge! Or maybe it was a horse! Who knows!