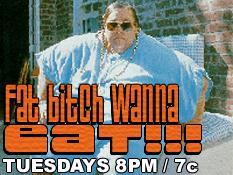 "This is an exciting moment for both UPN and the American public," quoted UPN programming president Tom Nunan. "Our gritty, 'in your face' attitude will finally be combined with the raw unpredictability and emotion that can only be seen in reality based programming. I firmly believe this will be the big boost we need to propel us from the ratings basement, eventually earning us a bigger market share than both the 700 Club and TNN combined."

"Fat Bitch Wanna' Eat" is described by Nunan as "a heartwarming look into the life and love of a sassy, 400-pound woman named 'Tootsie Pop Shenasta' as she faces the trials and tribulations each one of us encounters in our lives." Such obstacles include harassment by "the Man" and a special episode dedicated to Tootsie Pop's noble efforts to rid her neighborhood of drug dealers, which, under Congressional law, must be present in every UPN show.

However, the choice to show "Fat Bitch Wanna' Eat" wasn't an easy one for the programming engineers at UPN. Senior writer J.C. Williams explained in a post-press conference interview that their team was torn between a myriad of "reality-based" themes.

"Shit man, we had tons of fly shit on the grill," commented Williams. "I mean, total hype shit. We was talking about a makin' a show called 'Five Stupid Motherfuckers On An Island,' but then another network stole our idea. Of course, what we was thinkin' of was better, 'cause we ain't gonna put none of them fuckin' punks on our island. No Bible salesmen, no stoopid little rich white girls or 'Dawson Creek' reject boys. We was gonna' represent with real life fools, from slick drug dealers to them homeless fools that stands on the corner and offer to piss in your hand for a dollar." 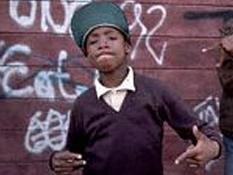 The move towards this type of broadly appealing show marks a change in direction of UPN's target audience, with previous shows such as "Homeboys in Space" getting such abysmally low ratings that they were often canceled in the middle of their season premier episode, causing the actors and comedians to go back to working their night shifts at White Castle.

"Yeah, we was trippin' for a while about ratings," Williams revealed. "But then we sat down and looked at the other fuckin' networks and says, 'Shit, we can do this shit better.' So we saw that everybody was watching ['Who Wants to Be a Millionaire?'], and so we think about it and come up with ideas like, 'Win This Dope Car, Niggah' and 'Get the Fuck Off My Porch!', but the network pussied out at the last minute 'cause they says we was showing too much booty on em. I says, 'You ain't never have too much booty on a show,' but they disagreed. Bitches."

UPN has also expressed interest into rekindling America's passion with televised dating shows, hinting upon possibly launching "Yo Man's a Dawg, Bitch," with host Grace Jones (who has taken time out of her busy schedule of starring as a post-apocalyptic mutant in various sci-fi videos). According to details from network producer Williams, Jones will "claw the motherfuckin' eyes out of any cheatin' dog she finds on the show" and "pop caps if she's gotta." The winning couple will receive a partially paid dream vacation to Alberta, Canada. UPN will also pay for somebody to watch over their apartment so "nothin' gets boosted" while they're away on the trip.

"This is truly a great day for UPN," Nunan remarked. "We're finally able to combine our essentially unwatchable and obnoxious brand of entertainment with mainstream ideas and popular television themes. We have no clue how it will turn out, but hell, there's no statistically logical way that our viewing audience can decrease at this point."