Bungie on 'Halo': 'We Have No Clue What We're Doing'

Bungie on "Halo": "We Have No Clue What We're Doing" 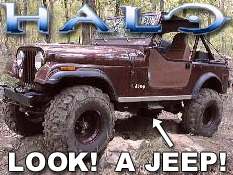 Chicago, IL - In a recent online interview with California-based GameCrotch.com, Bungie Software founder and CEO Alexander Seropian revealed his company has "absolutely no clue what's going on with 'Halo'."

"To be brutally honest, I got confused and lost track of it about three months ago. I have absolutely no clue what's going on with 'Halo'. Last time I checked, it was supposed to be some kind of class-based CTF game with vehicles and a third person perspective. Then we switched from the third person view to a FPS with some team based adventure characteristics. Then we took out the aliens, substituted a bunch of enemy soldiers and heavy weapons, and replaced the adventure aspect with a RTS plot. Then Matt came by and started putting a whole bunch of volcanoes and yetis in the game, and I don't have a clue what's going on with it now."

Online gaming news site GameCrotch.com was able to secure an interview with the elusive Bungie Software after winning a contest entitled "Which is Cooler: A Drivable Jeep Or a Sidekick Named 'Superfly Johnson'?" The prize was a coveted 30-minute interview with Seropian, who's vacuum-tight lid regarding "Halo" has allowed very little details to slip out.

"So what's the progress on 'Halo' like now?" asked GameCrotch corespondent Harris Nyler. "Excluding the limited exposure at E3, we really don't know much about the game."

"Well, you know, there's that jeep that you've all seen. Everybody seemed to respond positively to the jeep, so we toyed with making the enemy race of aliens be a whole bunch of evil jeeps, ones that flew around and shot lasers. Then Jason said it might be a bad idea, so we turned the game into a RPG and the jeeps would transform into these flying dinosaurs that shot fire at you. We were playing around with that when our level designer said he made this really cool CTF map for 'Quake 3: Arena', so we put that into the game and made it CTF based. After that, we decided to throw in some classes and ditch the CTF idea, going with a RTS / FPS combo. However, the enemy dinosaur idea didn't flesh out right, so we went to a third-person adventure game and we gave the main character big breasts. Gamers seemed to like that, so we made all the aliens into lesbian flying dinosaurs with big breasts that shot fire and turned into jeeps. I think the flags from CTF might still be in the game at this point, but I'm fairly sure they don't do anything. But they might, I have no idea." 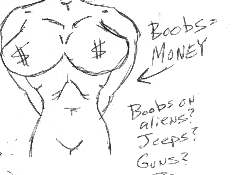 Developer notes from a recent developer staff meeting. Click for a larger pic.

Despite the uncertainty and lack of details regarding "Halo", hardcore gamers across the globe seem to be energized and enthusiastic regarding its eventual release.

"Yeah man, Halo just looked totally kickass!" exclaimed avid gamer >>>pYR0-h34D<<< on a gamers.com messageboard. "I mean, did you see the video of that jeep? Jesus Christ that looked cool! And the sky and terrain were like totally kickass!" When asked what kind of game he thought "Halo" was, >>>pYR0-h34D<<< responded with, "I don't know, looks like you blow stuff up or something. But did you see that jeep? Dude, it ROCKED!!!"

Teamplay fans are eagerly awaiting "Halo's" arrival, since "Team Fortress 2" (which was originally supposed to be released as an add-on for "Half Life" a year ago) has constantly had its release date pushed back thanks to game engine upgrades, new networking code, "TF2"-based children's cartoons, a special "TF2" limited edition Ford Explorer line of SUVs, and the inclusion of a "Team Fortress" based mod with virtually every product ever produced.

"It'll come out, you know, whenever it's done. We don't know when that will be. Heck, we don't even really have a plot yet. So far we've just been writing something about a race of these aliens who want to steal your jeep. No wait, the aliens are jeeps too. Crap, I think Jason might've changed the aliens to human-shaped spiders that throw atomic grenades at you. And it might be an overhead RTS too, where you use experience points to buy new weaponry, I'm not sure. I missed the first part of our last board meeting, so who knows what's going on with it now. But there is going to be a jeep and there's going to be guns. Other than that, I've got no fucking clue."