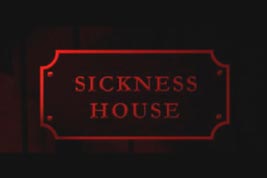 Overview: A New Year's party goes awry when some of the guests make the ultimate faux pas - they contract a lethal disease.

The Case For: The bungled political statements in this movie will make you feel better about secretly not understanding what's going on in Iraq.

The Case Against: Well, the lethal disease never actually kills anyone. That seems like a good place to start, doesn't it?

I recently returned from an expedition to the Far East. With me, I brought back exotic spices, fine silks, and treasures of gold and jade. I had hoped that I might also bring back one of China's contributions to the world of awful cinema to review for you, the loyal readers (and, to a lesser extent, for those of you who clicked on this link by accident). Sadly, I found nothing that could suit my needs. That's not to say that there weren't any terrible movies over there. Quite to the contrary, in fact. Believe me, I thought long and hard about picking up a copy of Morph-Man or Shark-Man, both of which have the exact same cover. Despite what the titles might make you think, though, these films were in Cantonese. While I may be able to elucidate and explicate the worst points of any English-language film, the Chinese language is not among my many skills. In other words, I may be a master debater, but I am not quite a cunning linguist.

Somethingawful.com: Going for the Cheap Joke Since 1999.

I may have come home from my Asian travels empty-handed, at least as far as lousy movies are concerned, but fortunately the good people at Netflix were kind enough to have one waiting for me when I got back. This fetid mound goes by the name of Sickness House. You'd think I'd learn to stop watching movies with words like "house," "home," "place," or "the" in their titles, but I just keep doing it. It must be because I love you. Or possibly for the money. Take your pick.

Sickness House was brought to us by Brain Damage Films, the same jerks who released Terror Toons. Think of Brain Damage as Troma Films, but without the quirky charm or cute, coke-fueled antics of Lloyd Kaufman. Once Brain Damage's overlong, incredibly irritating, unskippable self-promotion ends, the DVD menu pops up, showing the movie's title and more importantly, it's tagline: "New Year's was never so infectious." One more time, before we get into this: "New Year's was never so infectious."

Now, I can understand why they'd want to put "New Year's" in the big type. They want to drive home the point, as will be done countless times throughout this movie, that it takes place on New Year's. That's fine. Establish the setting. No problem there. It's the "was never so infectious" part that gets me. Has New Year's ever been described as "infectious?" Has anyone ever been accused of not being in the New Year's spirit? Has anyone ever uttered the phrase, "New Year's Fever - catch it!" I mean, yeah, I get what they're doing with this, the whole disease motif, but you'd think that calling the movie Sickness House would get that one across on its own. I don't know, maybe they worried that people would think the sickness was just a serious bout of New Year's Fever. The point is, we're still talking about the DVD menu, and already this movie has delivered a shrug-inducing "yeah, I guess that kinda makes sense" sort of feeling that will last until its final frames.

Somethingawful.com: Padding Our Reviews Since 1999.

The movie begins with a doctor and a nurse paying a house call to a girl who just came back from Africa with some sort of strange disease. You might think that I'm going to go straight back to another New Year's Fever joke, but I'm actually going to keep that one on reserve and instead point out that the last time a doctor made a house call was in 1922, and that was to diagnose a case of lumbago. Still, director Patrick Higgins asks us to swallow that and much more. The doctor and nurse find their patient sitting on a stool, seemingly dead to the world. As they go through a cursory examination, a shirtless guy covered in lumpy, uneven green makeup appears outside the front door and starts furiously jiggling the handle. The presence of this refugee from the world's lumpiest St. Patrick's Day parade (and that's a title that doesn't come easy) doesn't seem to bother the doctor or nurse, but it damn sure doesn't sit well with the girl. She savagely attacks the doctor, as if to say, "Why? Why would medical science allow me to be in this movie?"

A graphic informs us that it is now New Year's Day. This graphic is wrong. It is, in fact, New Year's Eve, being the day before the new year begins. New Year's Day would be the dawning of the new year. Do you see the distinction? Good, because Sickness House doesn't. They confuse the two a few more times before this thing is through, but to the movie's credit, this is the only time they do it in print.

Sorry, MythBusters Guy, but your shiny glasses can't save you or your wife, who is seconds away from eating your baby.Like I said, it's New Year's Eve, and that means it's party time at the Andersons'. Ben and Whitney Anderson are wealthy, powerful folks, and there's nothing they like more than throwing a wealthy, powerful party for all of their wealthy, powerful friends. I'm doing my best to emphasize certain aspects about these people, if you haven't picked up on it, because they don't mention it themselves until about halfway through the movie, and there is certainly nothing to indicate any of this visually. I'm not saying that the Andersons don't have a nice house - they do - it's just a little, well, dumpy. And I'm not saying that the $12.99 Stop & Shop deli platter they serve their guests isn't swanky - it is - it's just a little, well, dumpy. And I'm not saying that the Andersons and all of their friends aren't appropriately dressed for the occasion - they are - they're just a little, well, dumpy. I mean, there isn't a haircut in the bunch that could have cost more than that deli platter, and the maid's six year old son is the best dressed person there.

It also doesn't help that these politicians, lawyers, and famous authors seem to have absolutely no grasp of current events. This movie was made in 2006, and there's nothing to indicate that it takes place in any time before that (even if there is indication that someone couldn't tell the difference between New Year's Day and New Year's Eve), and yet when one poorly-coifed male partygoer praises the President, another one calls him a "typical liberal democrat." Just so we're all clear, there is no actual point to these partygoers being supposedly wealthy and powerful, or to them discussing politics. None of that will have any bearing on the plot whatsoever. In fact, while we're on the subject, it also doesn't make any difference that it's New Year's Eve. It could just be a party for any random occasion. It's not like everyone dies when the ball drops, although that might have been preferable.


They say you should write what you know. I suggest that more writers take that to heart. If you don't understand politics, that's fine. Find a way to avoid it in your movie. If you can't tell the difference between New Year's Day and New Year's Eve, that's okay. Lots of people get confused by that. Not people I'd want to spend any real time with, mind you, but people all the same. The point is, it's okay, just don't set your movie on one of those days. Stick with what you know, and I promise you your script will be better in the end.

Somethingawful.com: Giving Advice to People Who Don't Deserve It Since 1999.

See? What the hell is that?Now, before we go any further, we should probably stop for a moment to talk about all the guests at this little soiree. Firstly, there are the hosts, Ben and Whitney Anderson. Whitney is the sister of the girl form the opening scene. Ben is a schmuck, as Bens tend to be. Wait. The Andersons employ a maid, who lives there with her son. The Andersons' friends include (and I'm randomly assigning a lot of these names, so if you worked on this movie, and I got some of these wrong, just assume I don't want to hear about it): Edward, who looks like the mustachioed guy from MythBusters, and his fat wife, Cathy. They brought their baby to a New Year's Eve party, which is just one more reason I had trouble believing these people were supposed to be wealthy and powerful. Wealthy, powerful people don't even know they have kids until their first DUI. There's also the young, blonde, evidently single Alyssa, who spends most of this movie out of sight and out of mind, just like in the real world when a single person attends a party full of couples and alcohol. Michael is a writer with a terrible goatee, and his wife Hellene is perpetually mad at him about something. We'll never find out what that is, but it doesn't matter. It's still technically character development, I guess. Finally, there's Veronica and her husband, Joseph, who has the world's dumbest ponytail. He's this big, bald black guy with this stupid little hairloop at the base of his skull. It makes his head look like a gigantic brown teacup. Anyway, those are the players in tonight's presentation. Don't bother trying to keep them straight. I sure didn't.

Early into the party, Whitney begins to feel unwell and retires upstairs. When Ben checks on her a little later, after making a dweeby toast to his guests, he sees that she's barely conscious and decides to take decisive action. Not decisive enough to leave the party to take her to the hospital, of course. It's just his wife. It's not like he needs her to pour the drinks or anything. So, instead of bringing her to the hospital, where an alert and functioning staff of doctors would be waiting to deal with the massive number of holiday-related injuries that I'm sure flood in every year, Ben calls Victor, a friend who happens to be a doctor. Never mind that Victor was at home with his family. Never mind that it's New Year's Eve, and a doctor who isn't on duty is probably hammered. Let's get him out here.