What has that ADD bastard Zindryr translated now? - zindryr translated a story about how a man's balls were needed to save the world. He's got others in mind, including one about a one guy fighting the righteous battle against the KKK (who are shape shifting cannibals for good measure).

May or may not be about a robot master, or an anti-hero batman-esque crazy guy who fights in a town with werewolves and annoying reporters.

Victorian Romance Emma Second Act - More Maids, More Drama - "No see, it's not a maid anime, because it's about actual maids" Season 2


You know, Sesame Street and The Muppet Show had some damn good music - While trying to relive a childhood torn apart by people in animal suits, Tiny Faye decided that the music on Sesame Street is no worth listening to. Considering the music in current child-fare, this is more than likely a true statement.

MUSIC ON: Sex - KarmaticStylee is continuing his 'Music On' series with something that is a little far-fetched. All Mike Patton haters had better get here quick before Lovage is suggested anymore. 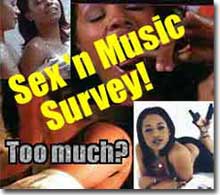 MUSIC ON: The Road (trips) - Here we go again, more from KarmaticStylee. This post comes complete with trolling.

College Radio Goons, I need your help - The_stuart wants to move beyond the antiquated compact disc at his college radio station.

Austin City Limits - 9/14-9/16 - JoeRules has the lineup for ACL this year. With Bjork and Dylan headlining, you'd better get tickets fast.

How the FUCK do you play standing up? - Mex learned how to do it sitting down and is having trouble with his hands while standing.

Is Steve Rocco Andy Kaufman? Is Andy Kaufman still alive? - Could Andy Kaufman be alive and presiding over the city council of a small California town? I know you want to believe and Choda Dog makes a compelling case.

Make Emoticons Sad - Again! - Women's Rights? is sick and tired of all the happy emoticons we have. Honorable mentions for Dash O Pepper's scrolling awesome and noapparentfunction's suicidal Smith.