At a Glance: "Extreme PaintBrawl 4." The title alone speaks volumes about the game. Since game developers have apparently run out of extreme sports to make games out of and attach the word "extreme" to, Cat Daddy has decided to make a boring, kid-friendly first-person shooter and try to pass it off as "extreme" and ignore the fact that making an "extreme" game that is nonviolent and completely unexciting is like releasing “Badass Checkers” or “Totally Rocking Hardcore In Your Fucking Face Tiddlywinks.” Hell, next thing you know, someone’s going to go off and attach the word "extreme" to a volleyball game or something! 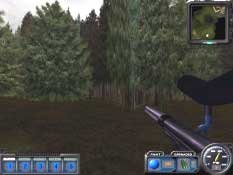 We are detecting a high blockiness reading coming from those trees, captain!

According to the most comprehensive source of Extreme Paintbrawl 4 information I could find (the box), the game offers “The Ultimate Multiplayer Combat Experience™.” Not only that, but it is the sequel to the #1 best-selling paintball game of all time, and also supports multiplayer through Gamespy Arcade! Due to an incident earlier that day where I hit my head on the wall and broke my brain, I decided the deal was too good to pass up. As soon as the cashier stopped laughing long enough to ring the game up for me, I was on my way to experience the finest example the ‘nonviolent 3D shooter’ genre had to offer. I should point out that my faith in budget titles had recently been boosted after buying both Serious Sam games for around $10 each.

I should also point out that my faith in budget games was smacked in the face, thrown on the ground and beaten up for its lunch money as soon as I loaded up Extreme Paintbrawl 4. The first stop on the tour of pain was the menu music, a horrible attempt at speed metal in which a guy with ADD frantically pounds on drums and randomly changes the tempo while someone else rubs his hand back and forth really fast on his guitar strings while changing frets every two milliseconds. I immediately realized this game was too intense for me to play without first reading the manual, which was zero pages long (all the information was printed on the inside of the front and back covers of the CD insert). The manual was extremely useful, and packed with things like helpful definitions for people who can’t figure out what the different difficulty levels might be.

Armed with the empowering knowledge that I should try the Hard setting in the Speed Ball level, I fired up the game and started playing, which turned out to be a horrible mistake that I’ll never quite forgive myself for. The start-a-game menu allowed me a wide variety of totally unique and original gameplay options, such as team deathmatch, capture the flag and a number of other modes that nobody has ever heard of before. If you claim to have heard of them then you’re obviously a lying communist who deserves to be stapled to the wall and beaten to death with a burlap bag full of bowling balls. I also noticed a ‘Hardcore’ option on the menu that was turned off by default. I assumed it would turn me into one of those hardcore paintball freaks who spend thousands of dollars on guns that shoot intercontinental laser-guided paintballs at 4.2 zillion feet per second, but it didn’t seem to change my guy’s performance at all. It turns out the ‘hardcore’ option is a way of making parts of the game more stupid, while simultaneously making other parts less stupid. I’ll get to that later.

My first game was played with the mysterious ‘hardcore’ option turned off, mostly because I’m a big wuss. I selected ‘instant action’ instead of ‘tournament’, because the odds were fairly good that a tournament would involve playing more than one game, and I wasn’t quite sure if that would be a good thing. Now that I’m a seasoned Extreme PaintBrawl 4 veteran with over 25 minutes of playtime logged, I can honestly say that it is not a good thing. But don’t worry, even after realizing this I kept on playing, both for the sake of the review and because I hate myself.

After starting the game and looking up at the radar, I noticed blue dots, which may or may not have corresponded to all the members of the blue team running by me in blue uniforms shooting blue paintballs. After a few seconds I noticed a bunch of red dots moving in from the top, followed shortly by red paintballs flying towards our team. That’s right, the radar lets you see all the enemy positions at all times. Apparently when you’re as EXTREME as this game is, you don’t need sissy things like stealth and camouflage. This is one of the situations where the ‘hardcore’ mode makes the game less dumb. When hardcore mode is on, you can’t see the enemy positions on your radar. This was undoubtedly done because it’s a known fact that having to actually look for enemies before knowing where they are is both totally hardcore and amazingly bodacious to the max.