I had to wear a 'professional atire' whatever that is because my profession is redneck but I guess carharts and waders aint professional enough for prince supreme court and the 1%.Hey what is up turd tanglers. Hope your week is treating you well because guess what my week has been about three months long sitting in supreme court. This is the worst job anybody in the world has ever had to do and I one time watched a how it's made where a guy was taking buttholes out of cows.

It's worse than the time I went camping and accidentally belted rocks at hornets until they lost their shit and chased me into a lake. It's worse than the community service I had to do after shooting birdshot at a low flying fish and wildlife airplane and that was cleaning up bears that climbed into power lines.

First of all I got kicked off the campaign trail. Rick Santaman is losing his shit yelling at reporters. First it was some new york times reporter and then he threw a clock at me for asking a simple question if his daughter (the other one not the one with the shovel chin) was down to party.

I didn't even mean like have sex I just meant maybe ride some rails into some trees and do some strip teases for this Japanese businessman I owe money to. That dude is totally honorable it is like his whole thing worst case scenario he's going to stick a finger in I mean come on that's nothing to lose your shit over. She can still claim virginity on her taxes. So after he missed with the clock and I might have headlocked him and put his head in a sink I got a formal complaint from secret service. 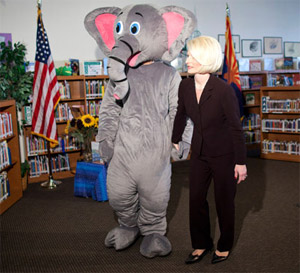 Being on the gingrich campaign you don't even know if you are alive or if while you were asleep some ninja cut your throat and this is all just a death dream created by the spirit molecule dmt aka spice aka tron 3.0So I went back on Nude Gingrich's campaign which is down the rabbit hole doing book signings and having staff members dress up like elephants. It's like full on peyote trip only it's not some wicked vision quest it's like you dosed and then your uncle busted into the room and started yelling at you about some impossibly complicated issue where he needs to move your car but it's the car that he parked there and where are the keys he'll move it himself but you need to be out by morning and if you're not he's calling the sheriffs and you end up just screaming like a woman and jumping naked through a plate glass door. I mean seriously this farty fucker spent like two hours at a campaign event yesterday talking about what would happen if by 2020 we all lived underground.

"Just think about that shit," he said letting it sink in. "Millions of miles of tunnels and there is nothing Iran can do."

Yeah good point dickwad and maybe we can all live in a toilet and turn into rock men and have the strength of twenty gorillas and get thrown out of a home depot for opening a bunch of different kinds of rubber cement to see which one has the best nose. There wasn't a sign saying not to, fuckers. It's Best Test Premium by the way if yall are feeling rubber.

So finally I got put back on Mitch Romneys campaign but they have this big fat giant guy named Francis who follows me around after my experience where I might have broke into Mitch's wife's cadillac and drove it through a Burger King and I mean in and out of the store not the drive through. So it's not like I can do anything badass because fucking Francis is there staring at me with his little black doll eyes daring me to do something so he can hit me with this pair of panythose full of apples he calls his "Mormon Letter Opener."