At a Glance: As proven by the flames for the Final Fantasy X TruthMedia review, Squaresoft has managed to amass a legion of devoted fanboys over the years. There is an alarmingly high number of teenagers out there who would attempt to bludgeon you to death with a cinder block if you were to make a statement that they feel unfairly represents Sephiroth’s true feelings. So in the same way Allah tests the faith of his followers by letting them all get killed by the Jews, Squaresoft has released Ehrgeiz (pronounced “air-guys”) to screw all their fans over and see what effect it has on their unconditional faith and love. So far only one fanboy has complained, and he was quickly clubbed into submission by another fanboy with a 3-foot Bahamut statue, so Ehrgeiz could be considered definitive proof that idiotic die-hard Squaresoft devotees are, in fact, idiotic.

I suppose I really can’t blame Squaresoft for coming up with this idea. This was released back in 1999, when Squaresoft executives were still crushed under the weight of all the money they were making from Final Fantasy 7. After seeing the terrifyingly large volume of horrible fanfiction their game spawned, they must have come to the conclusion that their high sales figures weren’t due to the game, but to the characters. So they paid a group of high-school dropouts called Dream Factory to continually punch their keyboards until they had created a game engine, slapped Final Fantasy 7 characters into it, and shoved it out the door to watch their fans lap it up. And ironically, ‘ehrgeiz’ is the German word for ‘ambition.’

The response it got from the public was mostly positive, according to a user review site I checked. It had an average score of around 4 out of 5, which is about 5 points higher than it deserves. I was puzzled about this, until I read some of the excerpts from the reviews. 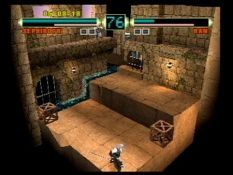 All of the images in this review were stolen from the official Ehrgeiz site, because I was afraid that if I used video capture software to take screenshots, my USB port would reject the incoming data and puke all over the carpet.

gameplay)5 most people when they play this game time goes by very fast but to me every min.is an hour is a day is a ah you get wat i mean.hopfully.

Graphics)5 I love the graphics i think there as good as any of my other games but i defenitly know its beter than fftactics.

I didn't pay much attention to the Quest game, it pretty much was stupid! I really liked this game!

I guess taking a look at these people’s language skills should reveal just why they were suckered in by this flaming trainwreck of a game. But what kind of game is it, you ask? Well, as anybody who has witnessed an actual trainwreck can tell you, it isn’t very destructive if only one train is involved. But if three trains are involved, the collision will result in a massive inferno of indescribable destruction and agony. With that in mind, Dream Factory has made Ehrgeiz into a combination of a badly-designed fighting game, a monotonous action RPG and a collection of amazingly stupid minigames. I can only hope these three strikes are enough to put all Dream Factory employees away for life.