OK, let's just get something out of the way at the beginning. I understand that it might seem strange at first to write an article that brings together Coheed and Cambria and Dr. Dog. After all, these two bands don't share much in common sonically, and there tends not to be a lot of crossover between their fanbases. But, there is one common phrase that describes scruffy banjo players and Gibson-humping, sci-fi-lovers alike: These people are pussies. 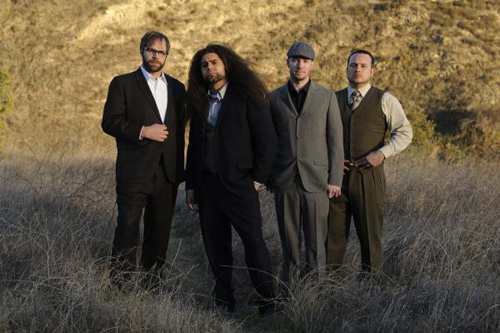 Pussies though they may be, these fans are actually right about a couple of things. When Dr. Dog's fans complain that descriptions calling the band a "jam band" are inaccurate ... they're right. And Coheed's army of minions objecting to their super-favorite-awesome band being pigeonholed as "prog-rock" ... well, also correct.

Because I'm a dedicated music critic (and occasional masochist), I have actually gone through the trouble of listening to the latest releases by both bands, and I can most assuredly say that Coheed and Cambria does not play prog-rock and Dr. Dog is most definitely not a jam band. In fact, those descriptions are exactly reversed.

Let's take Year of the Black Rainbow, the latest album from C&C, described on Amazon as "the eagerly awaited prequel to 'The Armory Wars' tetralogy.'" OK, first: tetralogy? You're telling me the band's past five albums were one big concept? Well, that sounds very prog, doesn't it? But:

Once again, Coheed goes to great lengths to dazzle you with technical chops which, of course, abound. But all those chops are built around hollow wanderings that ultimately go nowhere. Exactly like a jam band. A jam band that's more into Heinlein than hippies. These guys could seriously do more justice to "Dark Star" than they could to "Cirkus." There's no jazzy improvisation or sky-scraping grandiosity to what Coheed does; it's all just meaningless technicality crammed into dull pop songs with ridiculous lyrics.

Also, it has to be mentioned that the deluxe version of this album is accompanied by a 352-page book ... a motherfucking novel. Now, that's just pretentious - and fucking stupid. Iron Maiden didn't slip copies of Coleridge texts in the vinyl version of Powerslave, figuring that the sound of Bruce Dickinson warbling the boiled-down version for 8 minutes was plenty fine, thank you very goddamned much. Also: Mastodon. Not really smart, but smart enough to know about .001% of their fans ever voluntarily got past page two of Moby Dick.

But no, Claudio Sanchez is pretty sure you want to read his novel because his literary vision just can't fit into a fucking hour-long record. Again, this is not prog. The whole point of prog-rock is to take very lofty ideas, dumb them down, and then decorate the dumbness with filigree that makes it look all important again. Coheed and Cambria may have mastered some of the technical aspects of prog-rock, but they have yet to conquer this essential sleight of hand.

Yet, this is the sleight of hand in which Dr. Dog is engaged. To a casual listener, there's nothing about Dr. Dog's new album Shame, Shame that sounds remarkably different from the other five milquetoast indie rock records the band has churned out over the past nine years. The bland harmonies and just-quirky-enough instrumentation are still there, giving the legions of future minivan-drivers who inexplicably worship this kind of shit just what they ordered. But there's a huge semantic drama playing out around the band. Just look at a picture of these fuckers: 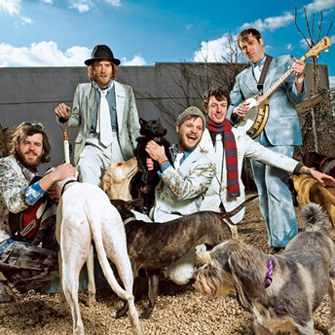 What does that say to you? It says that Dr. Dog is earthy (That shovel!) and rustic (That banjo!), goofy (That scarf!) and iconoclastic (That suit! Did he steal it from Prince?) It says all sorts of things that you DO NOT HEAR IN THEIR MUSIC. Or, more accurately, that you wouldn't hear in their music until you were prompted to look for it. This picture, and everything that Dr. Dog does that doesn't involve playing music, is your prompt.

Thus, you come to Shame, Shame predisposed to hear lofty ideas about the soil and the soul, but they've dumbed everything down to moronic indie-rock tropes like "Unbearable Why" and "I Only Wear Blue" and, every now and then, you hear a banjo (!) or a sound effect or a rough-hewn grace note that reminds you of Music From the Big Pink or some Pet Sounds outtake and all of a sudden, you're thinking that this band has really tapped into the great American sonic slipstream. It's commentary, you tell yourself, on everything great that has come before, only given a modern and innovative spin.

Bullshit. These guys are lazy and incurious songwriters, but they've brought enough meta-insouciance to bear on their craft that you begin to equate your boredom with their meditative insight. You're reading more into what's there than what's actually there, sorta like how Gentle Giant made you think you knew a thing or two about philosophy. While nothing Dr. Dog does is as intricate as the most straightforward prog album, there's nonetheless a postmodern approach to what they're doing that's incredibly in tune with the empty showiness for which the genre is known. Except with Dr. Dog, the "show" consists entirely of your own justification for listening to crap.