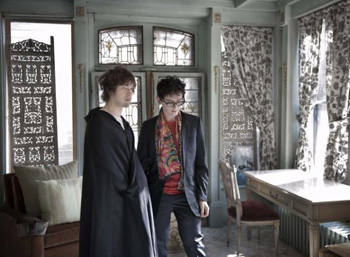 You can't spell 'congratulations' without 'curtains.'

MGMT's Congratulations comes out next week, though thanks to the Internet, it actually came out about two weeks ago and everyone has been listening to it already, either through one of the many leaks (probably) or on MGMT's website (maybe if you're at work or something?). The reviews have been mostly positive, with many of the writers noting how much the band has grown and evolved since 2007's Oracular Spectacular. This could have something to do with MGMT's insistence that they've grown and evolved since that time in 2007. One of the things music journalists do exceptionally well is parrot the musicians they're covering. In fact, UK blog The-Fly seems to have it down to a fucking science, noting in their review "There's definitely no 'Kids' here, no 'Time To Pretend' or 'Electric Feel.'" This is true. It's also nearly verbatim from MGMT itself, so they weren't exactly blowing anyone's mind there.

Of course, it could also have something to do with the fact that, when confronted by an album that's purported to be a radical departure from a band's established style, music journalists tend to err on the side of caution and claim the album is a huge leap forward, rather than a misstep on the artist's part. So, when members of a respected band known for creating danceable singles publicly announce they want their next album to be looked at as a cohesive whole, you can bet the writers over at Spin collectively came in their cargo shorts at the thought of not only championing this "forward-thinking" album, but also reaping the sick advertising money they'll get when they interview the guys in MGMT and probe them with deep questions like "Why is new album different from old album?"

It's more the result of an almost-dead form of media (music journalism) being entirely dependent on the good graces of a slowly dying colossus (major record labels) to throw them a bone once in a while. They've basically been backed into a corner and forced to give up any notion of being tastemakers or having any power over what the music industry does, so they've finally settled into their role as the white cat to Sony/BMG's shadowy evil guy from SPECTRE, alive for no good reason, but alive nonetheless. It's better to agree and purr when master does something confusing than to question him and get thrown into a shark tank or have some stocky Asian guy chop you into pieces with his hat (metaphorically, of course).

The bigger question, though, is this: Is any of this grandstanding even appropriate? MGMT claims its new album is best taken as one piece, citing thematic and musical connections. I've listened to it, and while it does share a few things in common with The Wall (namely, white dudes complaining about their problems with being rich and famous; and being a piece of hot garbage), it has the narrative structure of a third grader's story about robots. You're aware that in the creator's mind, all of this stuff makes sense, but it lacks any sort of logic or coherency to anyone who isn't also in the third grade. Also, instead of awesome robots, you get ennui, Brian Eno, and Dan Treacy. 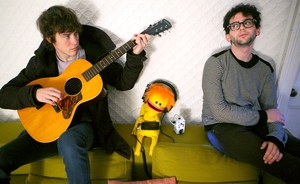 For as much as MGMT has mentioned that there aren't any real singles on the album, you'd think the tracks would be long or otherwise bizarrely structured. On the contrary, most of the songs are radio-friendly, lengthwise, and plenty of them have decent hooks. What makes them so radically different from the material on Oracular Spectacular is that these songs, rather than being fun and upbeat, amble along in boring, middling tempos. They're not singles, not because they're pieces of a musical puzzle that just don't work on their own, but because they're fucking boring.

Congratulations also includes the 12-minute, multi-part "Siberian Breaks," which is the most stereotypically prog-rock-sounding thing this side of "Dream Theater side project." Basically, it sounds like a bunch of unfinished songs cobbled together with washes of reverberating drums and keyboards without any sort of rhyme or reason. All those little chunks, by the way, carry the unmistakable scent of regurgitated Yes and Jethro Tull records. I don't know how else to explain the overbearing harmonies, flute solos, and downright goofy keyboard tones.

And I don't believe this could be accidental: At one point, for a solid two minutes, one of these guys starts singing in a fake (and terrible) British accent, sounding like a neutered Robert Plant. Then, immediately after that track (and I use "immediately" loosely - there's no sense of immediacy when your track ends with two pointless minutes of reverbed and delayed drums), they segue right into "Brian Eno," another track that reeks of a desperate ploy to be loved, or at least considered eccentric. (PROTIP: When writing songs about a guy who made some truly bizarre and forward-thinking music, don't make the same mistake MGMT did. Try to make that song genuinely strange and interesting, instead of just pronouncing "Eno" weirdly.)

The boys in MGMT want so badly to be taken seriously (as if millions of people buying/lauding their previous record didn't count for anything) that they seem to have looked at everyone else's metrics for what SERIOUS ARTISTS do and decided to do those things, rather than play to their strengths and continue making fun music for dance parties. 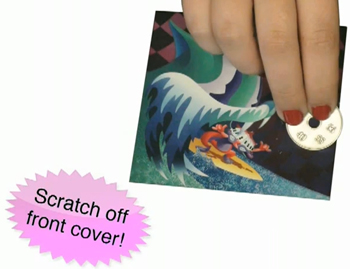 By the way, this serious artist bullshit is not limited to the music itself. In what absolutely must be a bid for a prestigious Best Recording Package Grammy, MGMT has decided to bundle the "Deluxe" version of their CD with a scratch-off cover, a coin for scratching that cover off, and a 32-page booklet detailing... something. The promotional video isn't clear on what it contains, and writing for Something Awful doesn't exactly grant me access to anyone who could answer that question. I'll be optimistic and assume it's a 32-page apology to whoever just bought this thing.

I've never really thought it was right to call an artist pretentious - it assumes that I know anything about what's motivating the people who are making the things I consume, and unless I know the people personally, I'm not going to weigh in on any of that. So I won't say that MGMT is being pretentious in regards to its new album. But I do think these guys are flat-out wrong. It's either that, or they realized they made a boring album that completely deviates from their first, and they decided to be all obtuse about it and try to trick the world into believing their bullshit. If that's true, then Congratulations (!) to you, MGMT. It worked.