Occasionally, irate morons send me messages asking "is that really the worst thing you've ever heard?" or whining "that's just an opinion." I'll now definitively respond to this correspondence: 1) Yes, if you're asking about Hollywood Undead. 2) No, fuckhead, it's the objective result of comprehensive statistical analysis. Now that I've encountered a group that registered the lowest score ever recorded, I feel motivated to share my formula. From this day forward, shitty musicians will be judged in comparison to Hollywood Undead. 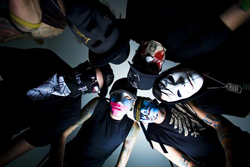 Straight outta MySpace: Hollywood Undead.If you've never heard of Hollywood Undead, congratulations on being older than 12 and/or having a life outside MySpace. Hollywood Undead wears masks, but they're not especially scary -- one of them has fucking butterflies on it. Assuming Slipknot plays heavy metal, Hollywood Undead performs a lighter, flimsier variety, like aluminum. Its members rap a lot of tough-guy shit, leading up to the faggiest crooned choruses that boy bands and emo could produce through homoerotic procreation. There's more to Hollywood Undead's atrociousness than sheer musical ineptitude, as detailed in the following categories. Feel free to run any other groups through this formula, but I doubt any musical entity could duplicate Hollywood Undead's unprecedented incompetence. They set the bar so low that it became embedded in the earth's core, where it dissolved in molten fluid. The new replacement bar will never reach such depths.

Band member names:
Embarrassing performers often select pseudonyms so repellent that they allow smart people to reject their products without having to hear their horrible songs. It's like those puffer fish with spikes that discourage sea creatures from devouring them. Stage names convey artists' aesthetic goals: If a sane person can't pronounce them without laughing or vomiting, then the music will probably prompt the same reaction. The following examples establish this category's spectrum: 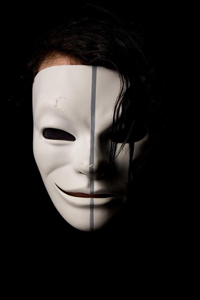 Total: -175 During the first few seconds of its video for "No. 5," Hollywood Undead introduces its members, their unsightly names flashing like illiterate graffiti across the screen. Never before has this standard roll call scene provided such disincentive for further viewing. On the plus side, the group's aggressive talentlessness prevents people from having to utter unpleasantly nonsensical phrases such as "man, that was a great verse by Da Kurlzz."

MySpace factor:
A sticker on the cover of Hollywood Undead's CD Swan Songs boasts "41 million HU Fans online can't be wrong!" To clarify that claim, 41 million MySpace plays probably just means the group's 400,000+ brain-dead "friends" revisited the page thousands of times to leave retarded comments, triggering the music player in the progress. Also, HU's MySpace friends are, in fact, extremely wrong. They're dominating the wrongness derby. It's difficult to imagine anyone making a worse music-based decision than supporting Hollywood Undead, with the exception of the members' own unconscionable choice to perform Hollywood Undead songs. The math in this category is simple enough: Scan the press clippings to see if writers commonly refer to the group in question as a "MySpace sensation" that built its fanbase through social networking. If so, subtract 50 points. 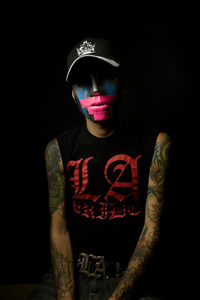 Any theories about how a guy who hangs out with Jeffree Star could get a pink ring around his mouth?Guest appearances/pop culture:
These categories usually come into play when assessing rappers, who bloat their track lists by "featuring" dozens of talentless pals, and who believe name-checking pop-culture phenomena is inherently hilarious. Speaking of rap, Hollywood Undead fans often preface their love for the group with "I don't usually like hip-hop, but" disclaimers, which they can dispense with immediately. Just because a band borrows a genre's absolute worst characteristics (see also: Insane Clown Posse) doesn't mean they're actually practitioners of that genre. Shitting in your front yard doesn't make you an adorable little puppy. Anyway, artists become guilty by association when they reference/cavort with crap.

Total: -150 With this guest list, Hollywood Undead's parties must be even lamer than its members' own ruinous presence would suggest.

Total: -110 Hollywood Undead combines all these diseased genres in a giant plague cocktail. What kind of fucking alchemy is this? Apollo, the long-dormant Greek god of music, should brush the dust off his statuesque shoulders and smite this abomination with an arrow from Olympus. Or some random dude could firebomb their tour bus. Whatever works, really.

Song Topics:
Hollywood Undead's fans like to babble about how adults dismiss the group because its lyrics specifically address their underage-mutant demographic. Apparently, the following subjects define modern teenage life:
Leisurely association with criminals: "We ride with gangstas and the pimpin's easy."
Expulsion of lethal secretions: "These tears are deadly"
Cutting: "I used to be lovestruck, now I'm just fucked up/pull up my sleeves and see the patterns of my cuts."
More Self-mutilation: "My lips are sewn shut/I watch myself bleed"
Eternal hellfire: "God, I tried/am I lost in your eyes? Just let me burn, it's what I deserve."

Even though it's depressing to know Hollywood Undead's "army" exists, it's encouraging to learn that they're actively thinning their ranks through suicidal self-abuse on their way to permanent damnation. Still, -50. 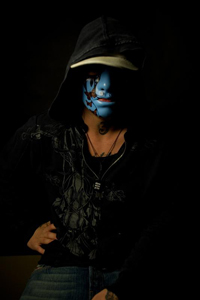 Johnny 3 Tears doesn't give a fuck what you think. *Sob sob sob.* The Could/Couldn't Care Less Factor, as determined by number of times artist claims not to care what critics think while spending inordinate time on the topic of detractors. (-25 for each occurrence.)

"Don't give a fuck if you hate it."
"I don't give a fuck what you think and say."
"Fuck those haters I see."
"Johnny's taking hands up, with all the faggots who hate"
"All the fags who badmouth this music, it's fuckin' stupid and foolish"

Total: -175 I subtracted an additional -50 for the use of "haters," because no one should have ever spoken this word in any context, let alone exhuming it from the slang graveyard in fucking 2008 during some pathetic display of petulant anger in defense of a masked joke band.

Grand total: -660 I'll subtract 6 points for the blasphemously dumb line "My dick's sinned so much, it should be crucified like Jesus Christ," thus numerically confirming that Hollywood Undead is music's Antichrist.