We know what you're thinking. You're thinking, "Wait a minute, today isn't Sunday, why am I seeing a movie review on SA? And why have I never heard of this movie before? Also, this review contains even more despair than usual!" Well, fear not - your beloved Current Releases haven't been hijacked. No, we are here to review those other movies. You won't find any of these movies in theaters. They are sitting forlornly at the bottom of DVD bargain bins. They are at the very end of your Netflix "suggested for you" list. They are unknown. Unrated. Unfathomable. They are the worst of the worst, produced by nobody and starring no one, with no redeeming qualities of any kind.

Given the lifespan of most of our predecessors in this position, maybe you shouldn't be surprised that it's a two-person job this time. Even with our combined efforts, years of neurological conditioning and cutting-edge equipment, we probably won't survive, but it has to be done. The people need to know, and they need to laugh. Once again SA is home to the most Awful movie reviews on the internet. Welcome back! - Garrett "Hydrogen" Neil and Sean "Trillaphon" Neil 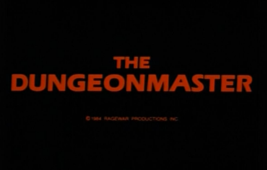 Overview: A nerd with a talking computer on his arm faces off against an evil wizard in a series of 7 completely nonsensical challenges, including "laser battle with giant claymation gorilla" and "live hair-metal concert with '80s supergroup W.A.S.P."

The Case For: If you've ever wondered what it would be like to have a thrilling battle of wits and willpower with the Devil for your immortal soul, this movie will show you the exact opposite of that.

We're going to start this one off with a bold statement: The Dungeonmaster is the worst movie to come out of the 1980s. This isn't an easy claim to make, since lord knows there's plenty of stiff competition, and no doubt several of you have already started writing e-mails to let us know that Terror of Blood Teen Island IV: The Quickening is actually much worse. But you'll be wrong, because The Dungeonmaster isn't even in the same weight class as any of those other movies. This movie has not one, not two, but SEVEN directors. It's just not a fair fight. No one director could ever be as disorganized and confused as a team of seven.

This isn't just any random mix of directors, mind you. The group responsible for The Dungeonmaster is a veritable dream team of cinematic pain. Let's see, we have Peter Manoogian, who would go on to direct the sci-fi gladiatorial combat disaster Arena, a movie destined to end up on this list of reviews in the near future. Then there's Charles Band, infamous director of classics such as The Gingerdead Man, and executive producer of pretty much every bad movie known to man. Every single director out of the seven either went on to mastermind a long list of atrocious movies, or has never directed again. That's what we like to call in the business "not a good sign." 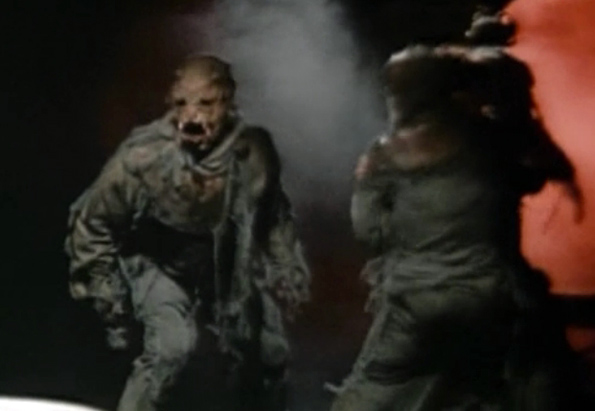 We'd tell you what the point of this scene is, but we searched Freud's Interpretation of Dreams and we can't find anything about 'cock-blocking burlap orcs.'Not having any time to waste, we join the movie already in progress, as a man wakes up in what looks like a moisture farm on Tattooine and starts following a mysterious woman. Actually, it turns out we have plenty of time to waste, because this all unfolds in slow motion. She leads the man into a room full of dry ice, where, as is traditional in movies of this caliber, her clothes come off instantly. The man starts getting down to business, but he's rudely interrupted by hideous, low-budget monsters who storm into the room, bitchslap him and drag the woman away. If you're overwhelmed with concern, don't worry; this is just a dream sequence.

The blue-balled dreamer who wakes up face down on his keyboard is Paul, our protagonist for the day. Paul is the proud owner of X-CALBR8, a magic talking computer to which he is "psychically linked" due to vague and probably stupid reasons. Paul's computer, which he calls "Cal" for short, is truly a wonder of modern science. When he goes for a run, he presses a button on his watch, and the computer keeps track of how long it takes him! Amazing! Too bad it doesn't have a function to tell him how upsetting his short shorts are. An off-key Casio tune provides the soundtrack for both Paul's light jogging and the gyrations we see during a somehow related women's aerobics class.

Despite being permanently sterile due to his choice of exercise clothing, Paul has managed to attract a girlfriend, Gwen, who stops by for dinner. As she's unpacking bags of groceries in his kitchen, he blurts out, and we quote, "Let's get married! It'll be perfect, I talked it over with my computer!" Ah, what fair maiden's heart could fail to be swayed by the ironclad logic of "love.xls"?

Gwen responds by ranting for a while about how Paul loves Cal more than her, which as far as we can tell is 100% true. Summoning all of his inner dorkiness, Paul somehow manages to come up with an even worse marriage proposal: After dinner, he sits Gwen down in front of his talking computer and asks it to "check its data on marriage between men with careers and smart, beautiful women," prompting the response "PROBABLE OUTCOME: SUCCESS." Unbelievably, she refuses to marry him yet again. What a stone cold bitch. 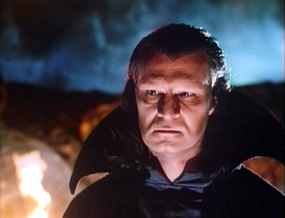 Tonight on NIGHT COURT: Bull consumes the soul of Judge Stone and feasts on the bones of the defense counsel.Enough pleasantries, time for the real movie to start! Paul wakes up to find his girlfriend missing and his apartment filling with dry ice fumes. One cheesy special effect later, he finds himself transported to a barren hellscape full of open flames, where Gwen is chained to a boulder. Oh, and obviously his pajamas weren't a suitable outfit for the occasion, so he's now magically wearing half of Sub-Zero's ninja outfit (not the good half.)

The host of the festivities teleports in and introduces himself as Mestema, ancient wizard and all-around bad guy. Mestema's hobbies include screaming, shooting lasers at things to various effects, and torturing random people. After 1000 years of traveling the universe, Mestema is ecstatic to finally find a "worthy opponent" in Paul and his magic computer, which is definitive proof that there is no intelligent life in the rest of the universe. Anyway, Mestema sportingly gives Paul a magic armband containing his computer Cal, and then they have a weird little ceremony to celebrate.