It seems that every time a handful of musical acts within a genre do something remotely similar, a new subgenre is created, giving someone a chance to come up with a badass name that compartmentalizes their particular interest. This week it's chillwave and glowrock, next week it might be post-folk. Our label-obsessed culture has reached a remarkable point at which there are more subgenres than worthwhile songs.

Yet no band is truly distinctive enough to warrant an entirely new genre of music, with the possible exception of the Star Wars Cantina Band.

In spite of its distinctly futuristic sound, this remarkable group came into being a long time ago. Their instruments were state-of-the-art wonders, yet wholly analog. They worked out their sound in dive bars, but were never far from intergalactic ports. I suppose that made them proto-classical techno-lo-fi garage multi-world music.

It's unfortunate that the Star Wars Cantina Band's many contributions to the musical world have been largely overlooked. Sure, we've all seen their brief appearance in A New Hope and found ourselves wanting more, clawing at our armrests until our fingernails cracked and bled. Beyond that, however, how much do you really know? 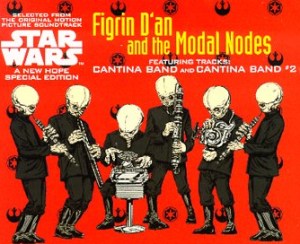 For starters, they had a name: Figrin D'an And The Modal Nodes. That's right, they weren't simply called the Cantina Band. That would have been the height of absurdity.

It was written while the band was still playing in the Mos Eisley cantina, a rowdy little place that kept the young musicians on their toes. Though they were witness to more drunken shootouts and werewolf arm choppings than one should have to endure, the experience forged their disparate elements into a unified whole. The Beatles have cited this period as an inspiration for their own stay in Hamburg, and acknowledged the Modal Nodes' identical outfits as a major influence.

Their debut album was an overnight success, propelling the young group to interstellar fame practically overnight. Many fans cited "Cantina Band" as their favorite track, also noting "Cantina Band #2" as a standout.

The Modal Nodes struggled with their newfound success. Caught between the pressure to live up to heightened expectations and the instinct to stay grounded, the band found itself in limbo for several months.

Eventually they emerged, but not as anyone would have expected.

Each of the six members of The Modal Nodes released a solo album on exactly the same day. Each album consisted of one track, featuring a single instrument tooting a strange, lonely melody. When all six albums were synched and played at the same time, however, the result was a moving rendition of their hit song "Cantina Band."

Unfortunately, this required six stereos, and most humanoids only have two ears.

Still, the band had done the impossible. Fairweather fans were put off by the complicated nature of this six-part second album, leaving an audience that was willing to follow the Modal Nodes in a brave new direction.

Just as things seemed to be headed in the right direction, Figrin D'an took his own life. Leaving behind a suicide note that simply read "I can't take the pressure of writing 'Cantina Band #3,' please forgive me," Figrin shot himself in the head with a blaster.

It took the band nearly a week to determine which member had died, as none of them could speak and they were all identical.

The passing of Figrin D'an marked a dark time for the band, as he had been the only one that knew how to signal the beginning and end of each song. The Modal Nodes were effectively finished.

Three years after the passing of Figrin D'an, the surviving members of the Modal Nodes reunited. Knowing the tragedy that struck while writing "Cantina Band #3," they returned to their roots, re-releasing "Cantina Band #2" and the ever-popular "Cantina Band." 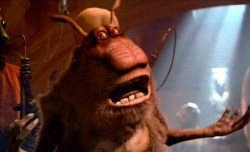 This time around, the Modal Nodes were fronted by Joh Yowza, which you might remember from the special edition of Return Of The Jedi. The former singer of the Max Rebo Band, Yowza was disillusioned after years of performing for the Hutt palace, and was anxious to bring his enthusiasm to an appreciative band.

The band's performances now featured a lot of running, yelling, sudden movements that didn't quite look real, funny voices, fart gags, and funny faces. They were a tremendous hit.

Though the Modal Nodes are long gone, their impact can still be seen today - if you know where to look.

There are, of course, the obvious Beatles influences, but there is so much more. If you were lucky enough to witness the Super Bowl, then you've undoubtedly noticed the parallels between the performance styles of the Black Eyed Peas and Joh Yowza. Also note how the Modal Nodes' fearless decision to release the same song again and again for years has inspired The Strokes to do the same.

The next time you walk into a cantina and you hear the familiar notes of "Cantina Band" or "Cantina Band #2," take a moment to consider how different the world would have been without the Modal Nodes.