Earlier this month, the dubiously credentialed Rev Theory became the first band ever to premiere a video exclusively via XBox Live. The "Hell Yeah" clip, which stars World Wrestling Entertainment "diva" Ashley Massaro, marks the convergence of elements so combustibly putrid that it's miraculous that the world didn't collapse into an implosive vortex as soon as they were combined. Hopefully this is the last we'll see -- and hear -- of this group, which is howlingly generic in every sense save its means of video distribution. 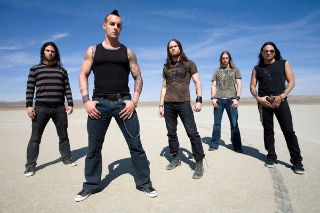 No matter how loudly they plead, do not give Rev Theory a "hell" and/or a "yeah."I'm going to assume that anyone willfully familiar with Rev Theory is too dense to read, so here's a brief biography for the literate. The group released the justifiably forgotten 2005 album Truth is Currency under the moniker Revelation Theory, before realizing that people who enjoy watered-down Southern-rock songs become confused and angry when confronted by multiple syllables. The band hails from New York, though four of its members look like the kind of wonky-eyed rural cretins who terrorize city-slicker campers in horror movies. One of the guitarists answers to Rikki Lixx, topping Nikki Sixx in the stupid-stage-name sweepstakes. Singer Rich Luzzi aims for Travis Bickle and comes up Travis Barker. 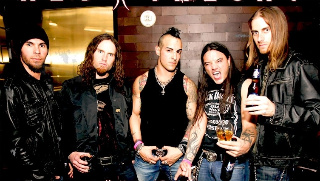 Rev Theory established its sleazy fuck aesthetic during 2006's Girls Gone Wild Rocks America trek, a mobile musical and cultural abomination that definitively disproved God's existence with its failure to culminate in a caravan of fiery, fatal bus crashes. Like that tour's headliner Hinder, Rev Theory celebrates the premise that made Girls Gone Wild viable: It's always possible to find sexual partners, as long as you search in society's darkest chasms, braving the herpes spores at Spring Break "hot spots" or self-described "rawk" concerts. We've already established heaven's vacancy, but it's worth petitioning the empty skies, just in case: If a member of Rev Theory should inadvertently impregnate one of the humanoid oddities that comprise the band's groupie pool, please, Lord, let these harlots accidentally abort their offspring while practicing their women-wrestling moves, so future generations won't be burdened by their mentally addled bastard progeny.

Inexplicably, an even bigger label (Geffen/Interscope) bankrolled the group's latest atrocity Light It Up, but Rev Theory can't count on traditional support channels such as word of mouth (because its fans utter only incomprehensible grunts). So, this puny entry in the also-ran chronicles, a group that will spend its summer as the opening act for Puddle of Mudd (pecking order: Puddle of Mudd equals dirt, Rev Theory represents the raw sewage that flows through the pipes below), became the first band to premiere a video on Xbox Live. 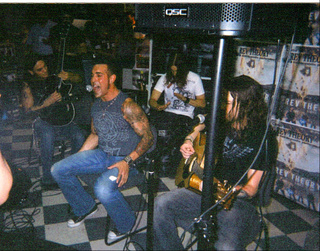 Starting with numerous single-entendre gropes at seduction ("Are you ready for the best damn ride of your life?"), "Hell Yeah" embarks on a horrifying descent into the catacombs of Rev Theory's hapless collective mind. The "give me a 'HELL,' give me a 'YEAH'" refrain reveals a mental space cluttered with cheerleaders, arena-pandering stage banter and grotesquely bloated choruses. "Hell Yeah" also manages to appropriate some of the worst moments in pop-culture history, such as Metallica's aggressively terrible single "Fuel" (Rev Theory: "She fuels my fire") and Tom Cruise's vengefully inescapable quote "I feel the need, the need for speed" from that homoerotic emporium Top Gun (Rev Theory: "My need for speed's got me gunnin'.")