The Chronicles of Jasper: Ultimate Destruction 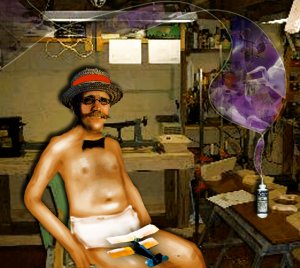 “The flesh endures the storms of the present alone; the mind, those of the past and future as well as the present. Gluttony is a lust of the mind.”
-Thomas Hobbes

I took a day off last Thursday. It was my first vacation in over 17 years, not counting the eight months of hibernation during the cold seasons, hiding under a thick layer of moss and peat. I broke out my model biplane kit that I’d been meaning to assemble for a few decades. In preparation, I stripped down to my knickers, chugged a V8, uncapped the model glue, and hunkered down for the task at hand.

I was very fond of building model airplanes as a lad. For one, they never teased me or threw me in rubbish cans like my classmates. The other reason was that I loved to inhale the sweet model glue fumes. It would take me to a magic place of wonder and whimsy, far away from this painful existence and mother’s boyfriend lashing me to the ceiling fan with his belt and throwing beer cans at me. I was never any good at actually assembling the models, but sometimes it’s not the destination that matters, it’s the journey.

Franklin watched me build in morbid fascination from afar, like a caveman seeing fire for the first time. As I took a long whiff of that intoxicating glue, old demons revisited the hollowed recesses of my mind where goblins danced and pixies pranced. The construction of the plane had started, a bit sloppy but steady. A wing here. A wheel there. Hours later when the job was complete, I stepped back to admire my work, glistening with sweat. I stared at my shaking hands, these hands that have created something of beauty like God himself.

This moment of supreme cosmic ecstasy was shattered by Franklin’s bray of donkey laughter as the wings of the model plane fell off and the whole thing crumbled into a shameful pile. I grew as red as crimson, angry as a thousand burning alien suns. Franklin’s advanced instincts sensed this and fled onto the roof as I gave chase with shoe in hand, ready to deliver a beat-down of a lifetime to the hapless extra chromosome man-child.

By the time I captured him it was dusk and I was in no condition for handing out footwear justice. I retired to the Faygo tub to soak in my failure, and reflect on the day. My vacation was over and the next day it was back to the grind of doing what I was born to do, dealing out cold poison to the unsuspecting juvenile populace. The streets are where I belong. No rest for the wicked. 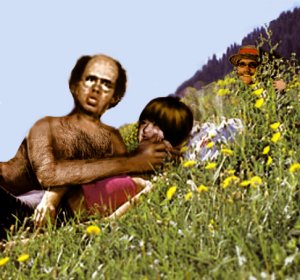 Franklin has a girlfriend. He met her on Tardspace, an Internet website made specifically for mentally challenged folks looking for love. I think the idea is an abomination, but the site does well and Franklin heard of it through the grapevine of retarded informants hanging out by the Jelly Factory.

I was wary of the idea and tried to dissuade Franklin through a variety of means, such as shiny spoons and threats of physical violence, but his mind was made up and once he gets an idea lodged in his rubbery brain, he’s as stubborn as a bear in a honey tree.

On their first date they went to the movie theatre to see The Fast and the Furious: Tokyo Drift. I believe the movie was made with the mentally challenged demographic in mind. I snuck in and sat a few rows behind them, ever watching for some weakness I could exploit and end this genetic catastrophe in the making.

Don’t get me wrong, I have no problem with the idea of love or fleeting fancies of the heart, like my little fling with x~raventears~x last summer, but I need Franklin to be focused on the ice cream trade without distractions from some downy floozy that only wants him for his money if I actually paid him anything other Spongebob Squarepants pogs. He was supposed to be taking inventory of our push-up pops but instead he spent all afternoon grooming his hair in anticipation for the next date. This is unacceptable.

This next big date was a picnic on a grassy hillside, eating uncooked Pop-Tarts and Marshmallow Peeps. I hid under a tuft of flowers, ignoring the stings of the angry bees who didn’t care for my presence in their pollen trove. There I witnessed something that nobody should ever see. They stripped off their clothes and clumsily pawed at each other’s bodies in an attempt to make what Franklin calls "crazy bump-bumps". It was terrible. Through trial and error they almost succeeded, but then God himself must have been offended because a thunderstorm swept in and brought the whole thing to a merciful end.

I hatched various plots to break up this coupling, such as forged love letters from other Tardspace contacts to cause jealousy, scorpions in Franklin’s Yoo-Hoo, and hiring a thug to throw the harpy temptress off a bridge. All of these plans backfired causing me immense financial burdens, an amputated thumb, and three years of supervised probation.

Perhaps it is time to let Franklin go, like a caged songbird yearning to fly. Born into the servitude of frozen goods, my squire in this war of sweets, he has blossomed into a strong-willed retarded man who now desires something I cannot provide. But like all men this one weakness will be his very undoing, leading to heartbreak and disillusion once the harlot has captured his secret seed and runs off with a famous actor, like that Corky guy from Thirty-something. This is the exact reason I castrated myself in 1987 and wear full body jumpsuits while scanning the vast night skies for comets.

I cannot do this alone. Franklin, come back to me. 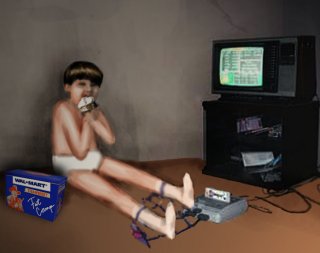 These have been the least of the problems plaguing the Jasper Empire. Much like Rome, the destruction started from the inside with Franklin’s revolt, but the killing blow was the economic inflation caused by instability. Business has been terrible, plummeting far below the "sperm found in cream cycle" scandal in ’94.

The reasons for this bear market in the ice cream trade is clear. Children have changed much in the last few years. This new generation of brats are far too fat and lazy to make the long trek from their dark media cove into the bright sunshine and the 30 feet from their porch to the curb. Instead they fester in their rancid nests, bloated and white like engorged larva, surrounded by expensive electronics and godless robots. The drones of bleeps and bloops from their large idiot game system drown out my jingle jangle that usually summons these beasts to the call of cold treats. Instead their self-centered parents, too busy with their jobs and alcoholism, buy their children large jugs of supermarket no-brand ice cream that they consume with no sense of pleasure or acknowledgment.

Things have gotten so bad, my only dependable customers that remain are the cannabis smoking teenagers that hang out on Hopkins Street and come to my truck for "munchies" or as they sometimes call it "snack attack". These roustabouts do not respect the authority of my mustache and call me such names as the "Fudgsicle Fop" or the even more popular "King Faggot". In the past I would don my ninja gear that I ordered from a catalog, find their houses, and burn them down while I masturbated in a nearby culvert. But these are troubled times and I don’t have the luxury of murdering my best customers.

So far I have been able to hide these losses from the home office with a little fuzzy math, but it is only a matter of time until the bookkeepers find the truth about my quarterly profits of one million spacebucks. The utility company shut off our water and electricity, leaving us to wash ourselves in tin buckets of Faygo and harassing minorities for entertainment. I can’t even afford to fuel up my trusty ice cream truck "Bold Destiny" and rely solely on trade winds to push me across the neighborhood.

To top it all off, the dreams are back again. This time I am not riding a unicorn and brandishing a flaming sword, rather I am back working at my old job making fried chicken breading at Old Country Buffet. It was my worst job ever, crumbling up the loaf of Wonder bread, rolling the fatty wet chicken in it, and dumping it in the deep fryer that was changed once a millennium. When I woke, there was the same old foul smelling syrup that soiled my bedsheets. I have never felt so alone in my life. I have been forsaken by the ice cream gods, and there is no reprieve or solace for me.

Is this the end? The end of Jasper?