It's been mere days since husky-voiced harpy Katy Perry released her breakthrough record, and already she's adversely affected the following: "girl-on-girl action," Rickrolling, social-networking sites, calling people "so gay" regardless of their sexuality, Happy Meals, music. She's spectacularly annoying, she's specifically targeting avid Internet users, and she's the bellwether of even worse performers to come. To aptly compare her to the Plagues of Egypt, she's an early, irritating one, like gnat infestation. 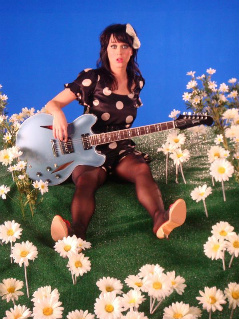 Katy Perry: As real as Astroturf.

Katy Perry began her career as Katy Hudson, a sixteen-year-old whose keen-on-Jesus debut contained songs such as "Faith Won't Fail." Had she stayed on the Lord's path, she could've remained invisible to the secular world, like so many other mediocre Christian artists. Instead, she took a seven-year sabbatical, then returned spouting the kind of provocative sentiments that would have earned her a public stoning back in the halcyon days of Biblical justice. It's like when Alanis Morissette surfaced after her stint in a Canadian-pop circle of Hell, except Perry emerged skanky rather than angry.

Perhaps because of lingering religious guilt, Perry riddles "I Kissed A Girl" with apologetic disclaimers and qualifying statements. Yes, the intragender liplock happened, but:

1) Alcohol clouded her judgment ("got so brave, drink in hand").
2) It wasn't premeditated ("never the way I planned, not my intention").
3) She's still really into dudes ("I hope my boyfriend don't mind it")
4) She doesn't have any lingering feelings ("don't mean I'm in love tonight").
5) In the larger scheme of humanity's achievements and tragedies, it was a benign, relatively insignificant incident ("ain't no big deal").

Perry's video contains the softest of softcore imagery: She frolics and pillow-fights with sparsely dressed ladies, but never touches, let alone kisses, any of them. The clip ends with her abruptly waking up next to some scruffy guy, suggesting it was all a PG-rated dream.

Back in 1995, Jill Sobule released the folksy hit single "I Kissed A Girl" (no musical/lyrical resemblance to Perry's electro-schlock version, which sounds like a drag-queen version of the Pussycats Dolls storming an '80s-themed S&M rave). Sobule's handlers insisted on a video treatment that makes Perry's live-action lingerie catalog look like Sin Sisters. Not only does Sobule not engage in any on-screen smooching, but also the video ends with her visibly pregnant (with Fabio's baby!), just to make it absolutely clear that she's not one of those queers dooming the country to underpopulated vulnerability with unfruitful copulation. Sobule tried to make a real statement about sexual experimentation, and found herself censored and sabotaged. By contrast, Perry realized she could better communicate her real message ("look at me!") with teasing, implied eroticism. 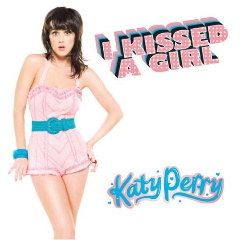 And she might do it again! Ok, probably not.

Recently, Entertainment Weekly touted strumpet Tila Tequila as "The Bisexual Revolutionary." Perry follows Tequila's "revolutionary" path, gingerly hinting at taboo behavior while flashing enough cleavage to distract from the lack of money shots. This revolution has nothing to do with sexual preference and everything to do with savvy attention whores realizing they can turn their usual tacky behavior (posting half-nude photos of themselves in public forums, initiating calculated same-sex make-out sessions) into a lucrative career. Guys who really care about "girl-on-girl action" should start dreading the future, because with "I Kissed A Girl," Perry offers the blueprint on how to reap all the rewards without any actual exhibitionism.