Don't forget to preorder my new book Deer in the Headlights or whatever the fuck it's called I can't remember.How's it hanging hobgoblins?

I have been mostly watching TV lately on account of I am laid out on the couch with a bad back from doing too pro 4 wheeler stunts over a creek. Mat-Su emergency room fuckers won't give me pain pills better than midols so I am locked up in constant agonies. Thanks obamacare. Plus I had to sell my Xbox to buy gas for my four wheeler (also obamacare) so it's all like gifts of the magic or whatever that stupid ass shit I didn't read in sixth grade was called.

The big news is this Wiener dude who is all over about getting his dick out for chicks on facebook and twitter and shit and it's like big deal. If you can't fluff the rod and throw it around the Internet what the hell good is the Internet? Isn't that basically made for girls sending titty pics and dudes showing their junk? Uh yeah. 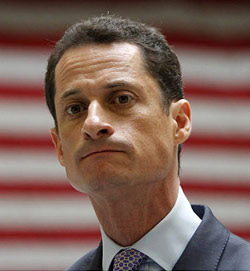 His problem here is he never closed the deal on that shit. If you stop at dick pics man that is dumb as fuck. You got to work your way up to that and then you go over to their trailer and pound them every way you can until they are messed up like bin laden.

Number one rule is when you show up bring tons of booze and desensitizing lube and number two rule is if you see Chris hanson that fucker throw a chair through a window and jump out because if you go out the door they will tase you out.

Then second rule is no questions. Do not ask her name, how old she is, whether that's just a rash, you just put on a CD of stripper songs, light a glade candle, and wreck it up till the trailer tips.

Dumb bird face looking motherfucker. He better quit now out of shame of never closing the deal. And what is up with those crazy chest muscles on that fucker? It looked like those creepy cenegenic fuckers where you want to say goddamn grandpa put down the power bars and whittle a stick or something jesus fuck. Old dudes getting ripped up is like dropping tangerine flake and flame stencils on a mudding truck. If you look like a baby bird beak fucker and you're dropping D shots on facebook hos I guess it doesn't matter.