Something Awful
Articles > Manifestos From the Internet

We, the delivery drivers of the world, have finally united under a single cause. Too long have the shackles of society kept us down, delivering unto us a world of endless humiliation, pain, and suffering! The articles of this manifesto are designed to grant us the inalienable, god-given rights and freedoms withheld from our profession. For too long have the crimes visited upon us been festering like a month-old casserole rotting away in the back of a refrigerator. We must cast off the Saran Wrap of hate and wash the ceramic dinner plate of our souls before mold starts to grow; mark my words, we shall not suffer through mold and mildew! Presented in this internet manifesto is a list of our basic demands we expect to be met. Ignore these tenets at the risk of a delivery driver revolution!

I had a delivery to a junkyard on a business highway at about 11:30 on a Friday. I walk to a trailer situated in the back of the junkyard and knock on the door. A living corpse, or at least what I initially thought was a dead body, answers the door. 60 years old, long stringy silver hair, cracked teeth, cloudy eyes... the whole shebang.

She beckoned me to come in and I replied I was much more comfortable outside. She then fully opens the door and I realize she isn't wearing any top. Her torso resembled a sock full of nickels hanging from a rusty nail. The nightmare further intensifies when she decides to turn around and bend over her couch, in plain sight of the door, fully exposing me to the cut-out ass out of her acid washed jeans.

I literally dropped the pizza, turned around, and fled to my car. After arriving at the store, I told my manager I was going home early to shower and wash the dirty from my soul. To this day, I still feel unclean. 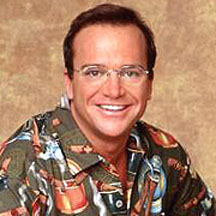 Tom Arnold has no relevance here except that he is wearing more clothes than most delivery customers.I am a delivery guy for a pizza place in Delaware. I have delivered, on several occasions, to "Georgie," a very large black woman in her late forties. To contrast, I am a skinny white Irish kid in my twenties, the complete size of maybe her left thigh. Although she was talking on the phone when I delivered to her, she kept telling me I was "such a cutie," repeatedly mentioning me to whomever was on the phone, noting how "cute" I was. I awkwardly accepted the barrage of compliments, and left perplexed by her lack of a tip.

I returned to the pizza place and told my story to my coworkers. One of them (a female) responded, "oh honey, that's not a woman. Georgie's a man." Oh, well this revelation sure made things much more comfortable.

I delivered to her / him / it a few weeks later. She / he / the thing came down the apartment stairs in a large black dress presumably created for inflatable gorillas in used car lots. I handed off her pizza and told her the total as quickly as possible. She claimed she forgot the change and that she'd have to go back upstairs and get it. How convenient.

As she turns around and lumbers up the stairs, I notice the distinct lack of a back to the dress. She is bare-backed, bare-assed, and barely fitting through the hallway. Needless to say, I left before collecting the 48 cents owed to me.

Now whenever my boss informs me I have to deliver food to another obese exhibitionist male transvestite who finds me sexually attractive, I feel sad because I hate them.

2) Your house will not smell like piss. If it does smell like piss you will take every effort to mask the smell. Do not touch us with your pee-hands, either. 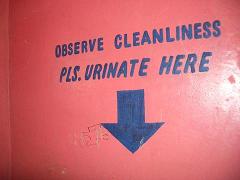 This sign should be hung over every tenth house, if delivery is any indication.Mr. Plue was an old man who loved attention. At the end of our block, a side street dipped down and ran parallel to some train tracks, hiding some monumentally shitty houses. Mr. Plue lived in one of the worst run-down shacks there. Once a month or so, he'd call the cops and tell them he was going to kill himself. We'd hear sirens roaring by on the street and we'd know what was up. Either the police force here is extremely skilled or Mr. Plue really sucks at committing suicide.

Every few weeks though, he'd order a dozen chicken wings from our store, which we'd have to haul over to the condemned cesspit he dubbed a "home." His crappy house reeked of cat piss, and when I say "reeked" I mean it smelled like the entire house had been dipped in a giant vat of cat urine. The drivers never wanted to go inside but we always had to so we could get his money.

One night Mr. Plue arrived at the door wearing only wearing sweatpants, completely drunk off his ass. He exchanged the money for food, then casually tilted his head back, closed his eyes, and began to piss himself while breathing the kind of sigh that only bladder relief can bring. To top off this wonderfully pleasant experience, he proceeded to scream, "I'm not happy! I'm not happy! OINK OINK OINK!!!" before slamming the door shut. We haven't heard from him again, and I thank god for this miracle every day.

Early in my delivery career, back when I was still learning the ropes, I was sent to a house in an average, middle-class, boring neighborhood. As I approached the door of the house, I noticed an odd smell. Having experienced numerous odd smells in my life, I thought nothing of it, and rang the doorbell. I began to grow a bit suspicious when the woman who appeared behind the door was absolutely soaked, dripping some mysterious foreign liquid. I mean, her pants were wet, her shirt was wet, and there was a very distinct odor radiating from her. I didn't see any pets, so that ruled out the possibility of a rogue fluid attack from the world's largest cat.

I quickly tossed this fat middle-aged woman her food, trying to escape as quickly as possible. When I asked for her money, she dug into her sopping wet sweatpants and fished out a wad of moist cash. She handed me the money, added a monumentally small tip, and began to close the door. There I was, standing on her doorstop, confused and clutching a handful of stinky, clammy cash covered in what was, as far as I knew, her own urine. It was some creature's urine, and I'm not exactly in any rush to discover who can claim possession of it.

I didn't know what to do the money so I set it on the seat of my beat up Sunbird and drove away as fast as I could. A few miles later I realized I had forgotten to give her the drinks she ordered, but there was no way I was ever returning to the Pisshouse.