I Am Number Four; Unknown

On one end of the spectrum, there are literary works designed to extort and manipulate young audiences. At the other end, we have trashy conspiracy-thriller novels that can only be found in airports. I Am Number Four and Unknown represent the cinematic equivalents of these categories. Just how well do they accomplish their goals?

I Am Number Four

EXPECTATIONS: A loud "CRACK!" rang out across Current Releases headquarters as Vargo threw open the door to Professor Clumsy's office.

"I bloody well told you already, it's your week to feed Smythe, and you're not getting out of it." The Professor did not bother to look up from his very British paperwork.

"I'm not talking about that," Vargo insisted. "Though he did eat my keys. No, I'm talking about I Am Number Four. I won't see it."

"And why the devil not?"

"Because it's completely commercial! It was manufactured entirely in a focus group to try to create the next big thing! Every second of it is complete pandering, desperately hoping to cash in on a naive demographic. There's not a shred of artistic value, and I won't let us be a part of it!"

Tense silence coursed through the hall. Jay Dub clutched his stuffed Marmaduke doll to his chest. Finally, Professor Clumsy looked up and sighed.

"My dear boy, how is that any different from all the other movies you watch?"

Vargo exhaled through his teeth and left silently to walk to the theater.

REALITY: Yes, it's true. I Am Number Four is the film equivalent of a test tube baby, meticulously and specifically designed to be commercially viable. Perpetrated by the same douchebag who lied to Oprah, no less. The story is basically this: After being outed as a liar for his fake autobiography, James Frey assembled a team of writers to do research and see if they could find the next thing American audiences will lose their shit over, to find the next Twilight, essentially. Somehow, they predicted that the next big thing would be a resurgence of alien stories, and so I Am Number Four was born. Is this frustrating to those of us who uphold the sanctity of art? Yes. Is it more frustrating that there are at least three other alien-related movies coming out this year, proving them completely right? Absolutely. Does it deter from the fact that I Am Number Four is actually a surprisingly decent movie? Um ... yes? 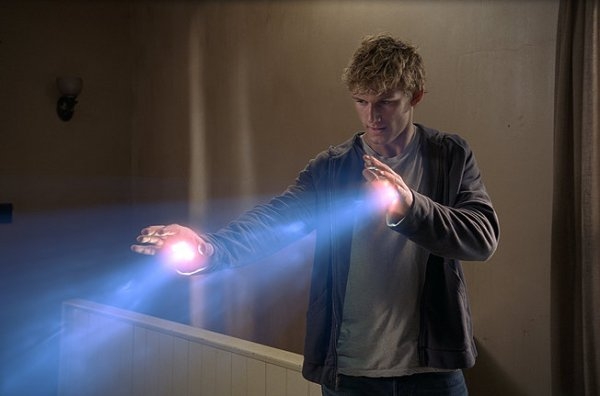 Let me try to review this like a normal film for a minute. I Am Number Four opens by telling us there are nine aliens here on earth, hiding from the Mogodorians, who have taken over their planet. (Look at that word and tell me it doesn't sound like some dude just wrote down the first syllables that came out of his mouth.) The Mogodorians have come to Earth to hunt down these nine aliens, who are spread throughout the globe under the guise of attractive white teenagers. The movie begins with the death of Number Three, and that leads us to the titular Number Four (Alex Pettyfer). It's never really explained why the aliens have to be killed in numerical order, so you'd think the smartest thing to do would be to kill Number Seven or Eight right now while they weren't expecting it. Honestly, if they can't figure that out, the Mogodorians don't seem like that much of a threat. They actually seem like pretty cool dudes, all things considered.

Four and his Terminator-like protector Henri (Timothy Olyphant) are on the run, and they end up in a small town calledForksParadise, Ohio. Four enrolls in high school out of boredom, and here's where things start to get generic. Four, cloaked in anonymity thanks to the brilliant pseudonym "John Smith," gets the standard movie-high-school treatment. He immediately meets generic love interest Sarah (Dianna Agron), befriends generic nerdy sidekick Sam (Callan McAuliffe) and becomes rivals with generic bully Mark (Jake Abel). Why does everyone stop and freak out when a new kid comes to school in Movieville? I know this is how movie writers think high-school popularity works, but ... actually, for all I know it is.

Eventually director D.J. Caruso (Disturbia, Eagle Eye) picks up the pace and moves into a decent sci-fi rhythm, broken up by the occasional teen romance and a (non-talking) CGI dog. The only real letdown is Four himself. He becomes less likable as the film goes on, and when he develops alien powers, he kind of transforms into an angsty whinebag in the vein of Anakin Skywalker and Edward Cullen, with marginally better line delivery. This is made even more unfortunate by the fact that the supporting cast is so good. Olyphant embraces the fact that he's bizarrely cast as the mature father-figure, and he has as much fun with it as possible, while McAuliffe delivers Sam's neurotic bravery with a hint of early Shia LeBeouf. (Make of that what you will.)

The real treat in the movie's second half is Kevin Durand as the hilariously evil leader of the Mogodorians. He doesn't speak until about halfway through, but when he does, you realize "Oh my god, he's trying to be Voldemort," and it is pure gold. With all these interesting performances going on in the margins, it's unfortunate that our lead is so weak. If I wanted to see a super-powered emo kid making terrible decisions, I'd just watch Smallville. 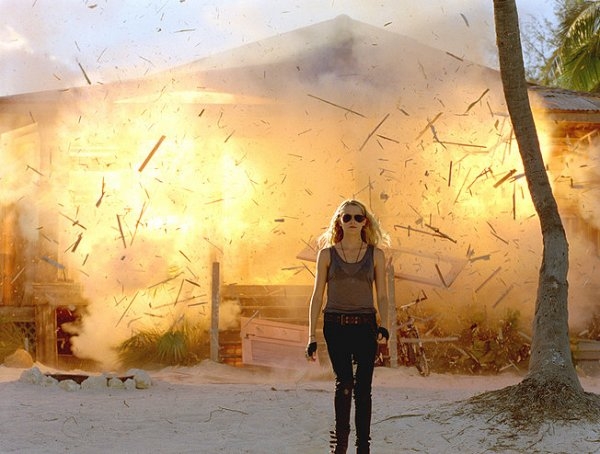 The most ironic part of James Frey's experiment to make the most teen-appealing cinematic work ever is that when I Am Number Four tries to be a supernatural teen romance, it's almost laughably bad. When it switches gears and becomes a straight-ahead sci-fi action movie, it's actually a lot of fun to watch. There are several entertaining action sequences, and some moments that are surprisingly violent for a teen-baiter. Despite some weird pacing issues, (like pausing the movie in the middle of the climax to have some more flirting with the two most boring characters), the movie finishes strong, albeit on a sequel-heavy note. I was stunned to tell myself I'd be okay with seeing more. If I were to rate I Am Number Four like a normal movie, I'd be done by now.

But I can't. So I'm not. Because my duty as a movie critic is to think way too hard about stuff like this, I can't help but feel that I Am Number Four has to be analyzed further. The real problem with my normal way of rating things in this case is this: Do I dock points because this work has absolutely no artistic value? I suppose I could discount it for being formulaic, and I do. But I don't count necessarily equate "being formulaic" with "being bad" -- sometimes, it's just a matter of knowing your audience. I feel like I should be angered by the crass commercialism of the whole thing, but I'm not. It's a movie produced by a major studio with the intention of making money, just like any other. If anything, I should give it credit for being honest. So I'm angry that it was expressly designed to be purchased? By doing that, I'm saying I'm mad at them for making entertainment. Hell, I wish that most movies cared this much about my admission. Am I angry at them for collectively hurting the artistic mindframe of the next generation? Sure, but it's no more harmful than Twilight, and it's actually a better movie.

So what exactly have I proven here? That I Am Number Four isn't great, but it's better than Twilight? Yeah, that sounds about right. The fact of the matter is, if noted asshat James Frey hadn't been at the forefront of this, no one would have given it another thought. The film tries to be as inoffensive as possible, and there's no reason to be offended by it. You can't argue that the existence of admitted cash-ins hurts film or literature as an art form, because in a week's time, we're going to having a five-hour celebration for a list of ten movies, all of which can be considered genuine works of art, so don't give me that. By the standards of normal film, I Am Number Four is decent, if not a little forgettable. By the incredibly low standards of "Mid-February Cash Grab," it's very good. Is it possible that we live in a world where I Am Number Four and The King's Speech can co-exist? Can a film be blatantly focus-group-driven and still be pretty good? Who knows? Who cares? Art is dead, folks. Long live the Arts.

Monty's getting hungry, Marty. Hop to it or I'll feed him your shoes this time. - Ian "ProfessorClumsy" Maddison