Once in a while a game comes along that sends chills down your spine. A game so excellent you swell up with tears at the pure nostalgia of knowing you can go home after a long day of browsing the internet in your cubical and play it. A game that, beyond all odds, shakes the foundation of gaming forever. Drift City doesn't come close but at least you get to drive around in cell shaded cars. 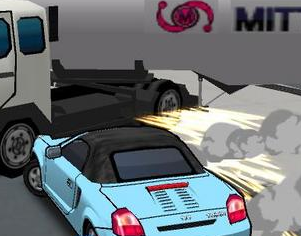 All we did in this game was ram into trucks.No anime babes with giant butter knives this time around! It is Drive Time™ and during Drive Time™ the only rule is to drive. Drift City uses a cell shaded graphics engine in an attempt to appear as though it doesn't have horrible graphics. Much like Windwaker, Drift City puked me into a disappointing vibrant cartoon world. I want to find whoever came up with cell shading and cell shade my fist into their face. I can imagine this douche bag approaching the art team, hard at work making each blade of grass move independently from each other, and telling them, "ha! You fools! Just make it look like a cartoon and no one will notice!" Well you know what, Bucko? I noticed.

Normally I try to skip going over the boring registration and download process because no one cares. However, I couldn't leave out the pain in the ass I endured in attempt to play Drift City. Some company named Ijji packed together a ton of games including Drift City and to play any of the games, I had to register with Ijji and design an obnoxious avatar. There are even avatar contests giving away great prizes (probably anime) to those who can create the most hideous likeness of themselves. The Goon Ckrew™ (as I now will refer to the goons that accompany me in games) all made avatars and displayed them proud. Oh and that K in "Ckrew" wasn't a typo, the K stands for kool.

After making a dumb avatar, you can now download the game and get started... well not really. When the game finishes installation and crowds your desktop with various icons, you will have to figure out which one starts the game. Kind of like a puzzle, Ijji keeps you on your toes by not actually launching the game but instead, their website. It appears that Ijji decided to make you play a mini game of figuring out how to actually play Drift City but forgot to market it as a feature. Think of it like steam but even worse and every single time you must log in as it will not remember any accounts. If you successfully patch the game and your video card doesn't melt away in depression while trying to run in 640 x 480, congratulations, you are ready to drive a cartoon car! 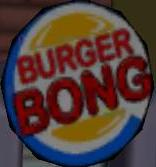 You can make a bong out of anything, man.Drift City is almost devoid of any anime outside of quest givers and your driver's license. I was able to pick one of four exciting anime faces that all managed to look equally stupid (as anime does), so I went with the one that had a gnarly scar. Before I could actually play, a warning appeared on my screen to inform me that driving a cell shaded car through a poorly rendered city is not actually like driving on Earth. However, my middle name is "Better safe than sorry" so I decided to take some extra precautions.

After strapping myself into my fake leather chair and putting on a helmet, racing gloves, and a fire proof suit, I grabbed some purple dumb looking car and headed out on the streets, cruising for babes and running stop lights. Drift City has some destroyable objects but it doesn't matter how hard you hit them. I inched my way up to a helpless street light and tapped it at a full force of two miles per hour sending it into orbit and embedding it into the moon. Forget rocket science and that running joke NASA, the developers at Drift City figured out how to project objects far away from earth with the most minimal force possible. 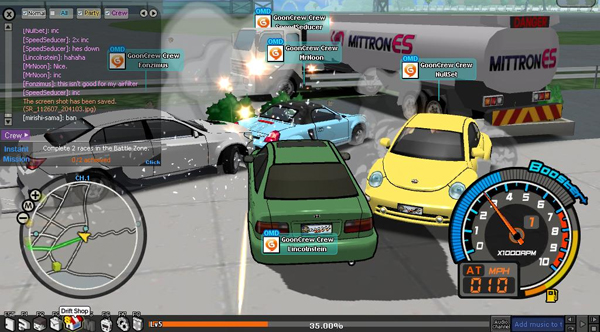 When playing any game in which I am given a mangled machine of steel death I immediately look for people to run over and when there are no people I turn to objects and cars. The streets occasionally had an NPC driven car, and although I couldn't actually damage anything (even myself) I could force NPC cars through buildings, barriers, or anything else that sometimes prevented me from going any further. In fact, those barriers weren't very great to begin with as the Goon CKrew™ and I managed to force players (and ourselves) out of the game world multiple times.

In an attempt at cleverness, Drift City has various fake stores like Burger Bong and Pizza Hat as well as some bogus companies named "Ford" and "Chrysler." Seriously guys, you aren't fooling anyone here.