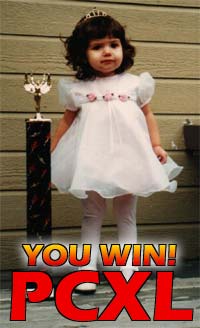 While smoking whatever sort of brain-dissolving substance they enjoy smoking and searching for an idea to actually get their site to make money, the staff of PCXL hit upon an ingenious idea: the government should pay them to employ retarded people to work for their company! Since the only positions they had open were in the writing department, they immediately signed up dozens of semi-able-bodied mouth breathers to produce "comedy" material for their brand new web site. They also realized that they could defray the cost of installing a wheelchair ramp and buying hundreds of safety pencils by charging people to access the pure comedy gold on their site! What an idea!

To entice visitors into shelling out their hard-earned money for access rights to this festering comedic boil, the good folks at PCXL set up a "hilarious" tour of their first issue. This tour includes such comedic gems as:

Keep in mind that it only took them a year to come up with this stuff. So head on over there; I purchased eleven subscriptions to their site because it was that funny. When Rich gets back I'll have a talk with him about letting me do all the updates after huffing paint-thinner and then charging everyone to read them. PCXL is leading the way for the Internet with a road paved by mental invalids!

Good Lord, Someone Tie This Guy Up 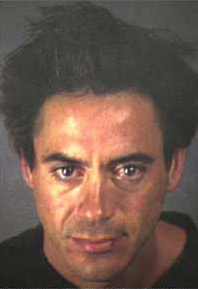 Lookin' good there, ace!It's honestly starting to get difficult to make fun of Robert Downey Jr. His insatiable cocaine lust has turned him into some sort of horrible celebrity "All Your Base" mess of clichéd jokes for late night comedy. About three years ago I remember thinking upon hearing that he had been arrested again; "oh, well this will be the last time because it is starting to get pretty ridiculous".

How wrong I was! His almost weekly arrests continued to make the news for some odd reason. Even a serial killer on a rampage wouldn't get the repeat press coverage that Robert Downey Jr. has. Now it has ceased to be funny; even Conan O'Brien's jokes about him are intensely lame. Something must be done!

In the interest of protecting society from predatory celebrity drug users everywhere, and in the hopes of preserving the sanctity of late night monologues, I have put together a list of some options to get Downey off the drugs. Many of these go into the "cruel and unusual punishment" category, but that rule is for pussies anyway.

The Alfalfa Special - I am pretty sure I saw this one on an episode of "Our Gang" where Spanky kept licking his hand and then rubbing his groin. Alfalfa filled one of his mittens with hot sauce and then insisted on going outside to play in the snow. When they came back in, Spanky removed his mitten and licked his hand in preparation for groin rubbing. Naturally, the hot sauce made his hat fly off and steam come out of his ears. That would be pretty funny to see in real life.

Pavlovian Response - Pavlov had it right. This method of mental conditioning would involve a pair of really large men in ski-masks who secretly follow Downey around. Whenever they see him start to do drugs, one would run out and beat him with a golf club and the other would activate a fog horn. Come to think of it, that would just make him afraid of fog horns. Oh well, I like this one because it involves hitting him with a golf club. And R-Lo is a big fan of fog horns.

Get High On Life - With a few smiles and some kind words, I am sure Robert Downey Jr. can enjoy just getting "high on life." The intoxicating chemicals in cocaine are no match for the intoxicating aroma of a fresh baked apple pie! The rush you get from speed cannot compare to the rush you get from flying a kite or talking to Jesus! Giving a guy a hand job in an alley is the same whether you are doing it for the pure joy or for the drug money, so he might want to stop that for a while.

You so crazy Gallagher! Where's my suicide pistol?

Scared Straight - I remember reading about this program when I was in junior high school and I thought it seemed like a pretty good idea. The way I imagine it working is that they would sequester Downey in some haunted location; house, museum, abandoned insane asylum, Hardee's, etc. Then the ghosts would convince him to stop taking drugs by leaping out at him when they are least expected, and attempting to brutally murder him. Vampires and werewolves might also work in this respect, but probably not Frankenstein, because who the fuck is afraid of Frankenstein these days?

Patch Adams - Master physician and all-around funny man Patch Adams knows that laughter is the best medicine for anything, even a broken leg or deadly drug addiction! Taking a page out of Patch's book, I would suggest forcing Downey to sit through hour after hour of "Def Comedy Jam" until the only things he can say are "booty" and "heasy". Then expose him to the mind-bending hilarity of some prop comics like Gallagher and Carrot-Top and he'll choose suicide over drugs any day.

Before we completely give up hope on Robert Downey Junior I suggest we at least try out a few of the five methods I have listed. Any one of these may unlock the secret to understanding his problem and bring him to the conclusion that he needs to deal with it before I have to hear one more rote joke spew out of Leno's giant stupid pumpkin face.