Dofus - The game with the name

Lowtax...?I have played many MMOs since Everquest. Some of these MMOs were complete trash (Sims Online) and others I still play because of a cocaine-like addiction (World of Warcraft). I, however, have never played an MMO which reminded me for that I am an idiot. Maybe Dofus is one of those ironic names, such as a morbidly obese man with the name "Tiny." This could possibly be the best MMO ever created... ironically.

Dofus is not like many massively multiplayer games out there. It is turn based and designed entirely in Flash. When I read "turn-based" I think of games like Chrono Trigger or any of the thirty seven Final Fantasy games (except the actual MMO they made). Hailing from France this game also has some things that could remind you of anime. However, this game's style is more like some goofy cartoon that you saw one morning and had no idea what the hell you were watching.

When first arriving at their site, I was greeted with some picture that I had to click on in order to actually see the website. Dofus was already teasing me by playing it's hard to get tactics. Unfortunatly for Dofus, I don't understand the meaning to "no." After clicking on several pictures I finally arrived to the real Dofus website.

Previously unknown to me, you are first treated to a loud video trailer of the game that nearly blows out your speakers. After squealing like a little girl, I proceeded to register my Dofus account. This time I was not asked to mail anyone my social security card with a pint of blood and a sample of semen. 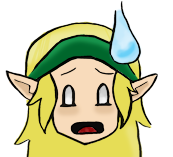 Characters in Dofus apparently have no bodies.While the client downloaded, I decided to check up on the community. To my surprise, they were nothing like the other communities I experienced in prior reviews. Half of this community could actually string together a coherent sentence (unlike myself) and didn't resort to stupid internet chat memes.
The first thing I do on any game forum is search for fan art and comics. It took a while to find masterpieces but they did exist on this forum. Some of the fan art even reminded me of my childhood of dressing up like a girl and running around with a cardboard box on my head. Apparently your character can zap half chicken, half pom-pom creatures by summoning lighting from Zeus himself. This is going to be awesome!

There are many classes in the game and all of them look equally goofy and deformed. This is another game in which your physical appearance is determined by the class you choose. If you want to be a warrior class, get use to running around with no shirt and some bright red tattoos. If you want to master the bow and arrow, be prepared to look like a giant tool.

For the reason stated above, I chose to go with an archer. This would be the first game in which I already had a connection with my character before even creating it. I was eager to bust my Dofus cherry and experience some intense turn-based combat.