Ah, America's two greatest past times, baseball and the internet, rolled up into one lagged buggy ball of fifth. Ultimate Baseball Online 2007 combines all the positives of playing a sport without actually having to get out of your chair and exercise. Initially I enjoyed this game but it ended up like a gallon of milk; a little bit of milk is great but drinking the entire gallon will cause you to vomit in front of your dumb fraternity friends while they give each other high-fives. 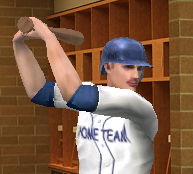 "About to bludgeon a rabbit" is one of many stances to choose from.I never quite understood the phenomenon of baseball and those that can stand to watch it. Outside of some poor batter being hit in the side of a head by a ball flying at 96 miles per hour, no real injuries exist. Why watch a sport that doesn't involve two people from opposing teams going at it in an all out brawl in some attempt to injure one another? Sure this can happen in baseball, but happens far more in real sports like poker or World of Warcraft. I remember playing baseball as a child and I sucked so horribly I refused to even watch it unless I had a Gameboy ready. Those childhood horrors came flooding back when I decided to review Ultimate Baseball Online 2007 and I no longer have my Gameboy.

It seems to be the new trend in horrible MMOs to force the players to launch the piece of crap from a website. I still, by the way, want to decapitate whoever came up with the idea and parade their head through a small village on a stick. Developers: I don't want to go to your stupid, poorly maintained websites that are nothing more than a giant ad placeholder. It wouldn't have been so bad if the website actually worked but if I tried to visit the Super Ultimate Baseball Online Multiplayer 2007 website with anything other than Internet Explorer it would throw nasty errors at me, barking that I must use Internet Explorer. Even then that was not enough as the website crashed roughly four or five times before I could get the dumb game launched. Eventually I started to keep track and came up with about 27 crashes by the time I uninstalled the game in a fit of nerd rage.

Once the Goon Ckrew (no longer trademarked) and I managed to get into the game we actually did have fun. However it is one of those "so bad it is fun" kind of games and the novelty wore off quite quickly. Most of our fun came from our inability to play this dumb game and constant insults that we threw at each other. Once we figured out how to actually play the game became boring just like real baseball. 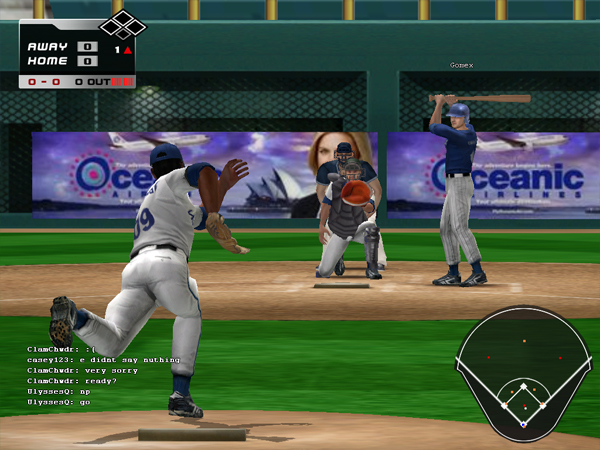 Messing around with the player base was especially easy this time around as the in-game AI was so buggy that the developers made a whole slew of bannable offenses instead of actually, you know, writing better AI. The following quote is from Ultimate Baseball Online 2007's code of conduct:

"No Base Stealing. Until further notice, there will be no stealing in UBO.
This includes no running leads with the exception where there is a full count (3 balls
and 2 strikes), with two outs in the inning, and a force situation (meaning 1st, 1st and
2nd, or bases loaded) OR a teammate has initiated a Sacrifice Bunt (see #4 above).
Additionally, initiating an AI catcher throw behind the runner (the base where he/she
originated from) is no excuse for being forced to advance. Failure to adhere to the
no-stealing rule can result in being kicked off the field before game play can resume".

A common bug the Goon Ckew exploited involved a player standing directly in front of the batter with his mitt out and if the batter managed to hit the ball it would automatically go into the player's mitt and become an out. Screams of "PRES F4 TO BAM HIM **** U *****" carried throughout the games of Ultimate Baseball Online 2007 but only a couple of goons were actually banned from the entire game.

This brings me to the worst word sensor I have experienced thus far. The strict word censor even reduced the word "balls" to asterisks in an online baseball game. Almost impossible to actually communicate with someone, this game would mutilate a sentence such as "At least funbar can catch balls!" to "At lea*****nbar can catch *****!"