It's an old-fashioned kind of weekend, with a solid baseball movie, a terrible action movie for teenage girls and a quality action movie for everyone else. You can probably guess which is which. Oh, and let's not forget Dolphin Tale, which defies classification and is reviewed by our guest Danny "Sheldrake" Reid from Can't Stop the Movies.

EXPECTATIONS: Once or twice a year, we need a good "underdog team" sports story to remind us that sometimes, the little guys do unexpected things. In fact, they apparently do it so often that there are enough stories to make these movies... once or twice a year. Really, why do we even have underdog teams anymore? If anything, movies have taught me to be shocked whenever the expected favorites do what everyone expects them to do. If I were on a sports team that wasn't very good, I'd make it a point to start playing even worse, but look like I have a lot of heart. That way, the movie writers can go Cool Runnings on it and make up a movie where I win in the end. Nicolas Cage would play me, of course.

REALITY: If you've read this column before, you know how much we absolutely despise movie reviews filled with nothing but puns, so understand this: When I say that Moneyball is hit-and-miss, this is a metaphor that accurately describes my feelings on the film and is in no way meant to be a pun regarding baseball terminology. I've held out punless this far, and I'm not about to strike out now. 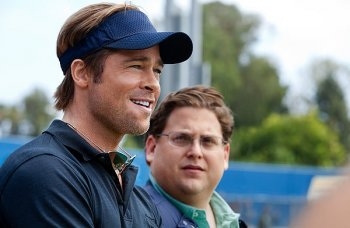 There's always the one guy who gives the joke away by laughing early.Let's start by saying if you walk into Moneyball expecting a typical sports movie, you'll be surprised. Moneyball is about baseball in the same way that The Social Network is about Facebook. You could make this movie about any team in any sport and the story would be exactly the same. Hell, you could make up a team or a sport. This movie would play out the same way if it were about the CityName SportsTeams playing a championship game of Schneider-ball. It's about the people behind the sport, people like Oakland Athletics General Manager Billy Beane (Brad Pitt).

Beane starts off the movie losing his three best players after a heartbreaking postseason loss. While looking to replace them with players his team doesn't have the money to buy, he stumbles across Yale Economics grad "Peter Brand" (Jonah Hill, playing a slightly altered version of Beane's real-life assistant Paul DePodesta). Brand claims to have unlocked a formula for purchasing position players based solely on statistical analysis, with special emphasis on the number of times they get on base. Billy decides to follow Peter's model, and predictably he is met with resistance from everyone in the ballclub, including his scouts (Jack McGee) and on-field manager Art Howe (Phillip Seymour Hoffman).

I made the comparison to The Social Network for a reason, and it's not just that both films were written by Aaron Sorkin. Moneyball clearly owes a lot to Social Network, and it shows in the filmmaking. There's not much actual baseball footage here. Instead, there are closeups of charts and computer screens, and shots of people gazing longingly at them. The score aims for the sweeping minimalism of Trent Reznor Oscar-winning Network backdrop, and it fails because it's very obvious about it. In fact, this movie is obvious about everything. Want to show that Billy's angry? Have him throw something. Seriously, he does it at least once every half hour. This film could be renamed Brad Pitt Throwing Things: The Movie. Hell, that might sell better. Anyway, the film is trying to recreate The Social Network's formula for power, and it has an advantage because as good as Jesse Eisenberg was, Brad Pitt is a better leading man. Unfortunately, Bennett Miller is nowhere near as good a director as David Fincher. 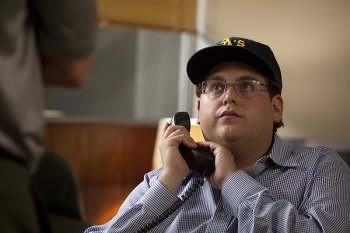 Brad, did you glue my hand to the phone?There is so much build-up in the film's deliberately paced first hour, it borders on ridiculous. A film about building confidence should not be afraid of its audience. Flashbacks to Billy's past career and moments where people question his plans start off with the best intentions, but grow repetitive very quickly. The middle act is stuck on repeat. Argument, flashback, throw something. Argument, flashback, throw something. Fortunately, Sorkin is smart enough to allow a break here and there for some genuinely charming and funny moments between Pitt and Hill, and some actually sweet scenes between Billy and his 12-year old daughter Casey (Kerris Dorsey.) These are the highlights of the film. Under any other writer, introducing the kid would be cringe-worthy saccharine, but Sorkin is so good at dialogue and Pitt is so convincing as a proud father that it feels real.

When the movie finally hits its stride, it's a pleasant enough experience, due in part to a nice technique the filmmakers employ in the storytelling. The movie isn't just shot from Billy's perspective; the entire film is Billy's perspective. The movie literally grows with the character. For most of Moneyball, Billy doesn't actually watch the games, so we only get to see people playing baseball through TV screens until he starts seeing them in person. Billy doesn't talk to the players, so we barely see them at all until he starts mingling with them. Even then, they're kept at a distance and we don't really get attached to any of them. I'd complain, but the audience is seeing things the way Billy must; the players are commodities, not friends, not even real characters. Phillip Seymour Hoffman is also a non-character; his performance is incidental to the film because his character is incidental to Billy's story. 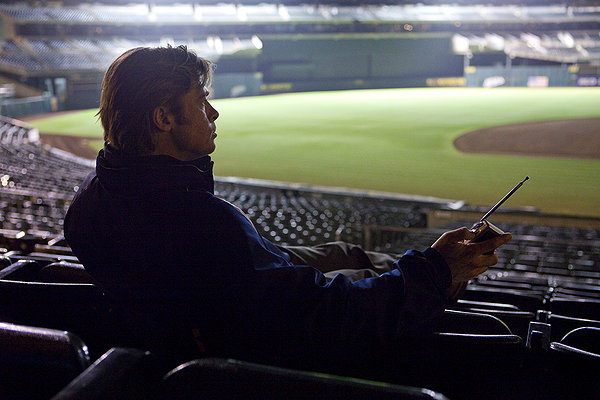 Brad, stop sulking. You had to know he wouldn't see the funny side.

As for Jonah Hill, I've been hoping his strong performance in Cyrus wasn't a fluke, and here he really knocks it out of the pa... I mean, he performs very well. (Whew, almost a swing and a miss there!) You can watch his character grow in confidence and lose his naivete, and it's all very subtly done, especially for a man whose career started by dressing in a hot dog suit and yelling "ASK ME ABOUT MY WIENER!" But, of course, the real powerhouse here is Pitt. His performance and natural chemistry with the rest of the cast carry what would otherwise be a mediocre movie with a few bright spots. Pitt has one of the most expressionistic faces in Hollywood, and in a movie that over-explains everything, he manages to convey the most information when he says nothing at all. When he does say things, he says hilarious things, like Billy's multiple failed attempts to give locker-room inspirational speeches. These usually end in, you guessed it, him throwing something.

The pacing of Moneyball is odd, and honestly at times it's incredibly boring. (Similar to an actual baseball game.) During its best moments, though, it's up there with Sorkin's best work. It's one of those weird movies that probably gets better with repeat viewings, but isn't really worth watching again. Still, I'd like to, because I'm convinced there may be some political subtext to pick up on. (This is an awfully interesting time to make a film about a bunch of poor guys who spend their money differently in order to beat the rich guys. Also, Aaron Sorkin wrote this.) For the most part, though, Moneyball is not the slam dunk in the final lap of the fourth down on the cricket thingy that it wants to be.

MINORITY REPORT: I swear I thought this film was called Monkeyballs for far too long. That would have been a very different -- and perhaps much more interesting -- film. - Ian "Professor Clumsy" Maddison