In all my years of gaming, I could never imagine a game as bad as Tyra Banks and yet here we are with Tyra's Virual Studio. I have never seen her show but if it shares any relation to this game I am truly thankful I do not watch day time television.

*Not actually in game.Initially I planned to write this entire article on how Tyra Banks is a useless brain dead twit that somehow managed to land a television show for the equally brain dead. However, that seems to be general knowledge to all those that do not sit at home religiously watching her show, so that wouldn't be very entertaining. Apparently enough people watch that garbage for someone at the show to say, "Hey I think we need a game for people to play about Tyra Banks!" Unlike most dumb ideas, this one made it through the cracks and enough people backed it up. I hate every single one of them and I can think of no other group that is more deserving of ritual execution.

At first glance, the Tyra Banks game looks like a Second Life rip off with an urban theme. I don't know how but this game manages to suck more than Second Life since it basically serves as a virtual chat room for idiots that have a hard time with simple English. It would truly be a challenge for the Goon Ckrew™ to harass people in a game with less to do than The Endless Forest but somehow goons always seem to overcome in this kind of environment.

In order to recognize other goons, the Goon Ckrew™ formed a makeshift gang unlike any other. However, wearing with nothing but red pants and doing windmills did not really strike fear into the player base. Eventually the moderation team "solved" this problem by banning everyone in the game wearing red pants. That's right, everyone who wore red pants received in the very least a twenty four hour ban. Some would label this as a success as the goons managed to ban a whole slew of players that wore red pants. However, Goons are relentless (at least for two weeks) and temporary bans could not keep them back. 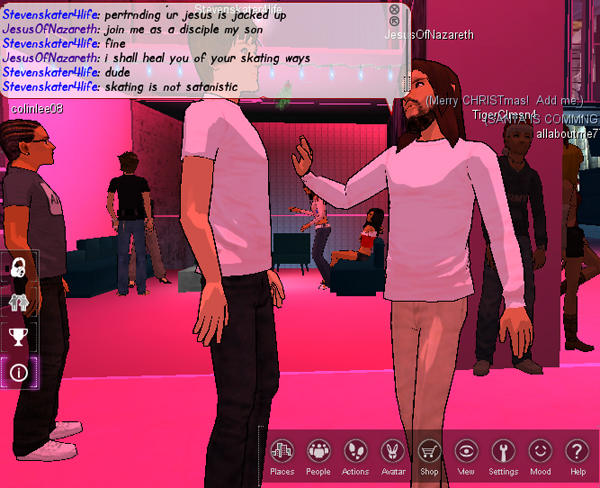 Surprisingly, Tyra's Virtual Studio did not have a lot of Tyra content. Outside of a t-shirt and a small studio in a dark corner, this game was almost devoid of any Trya Banks crap. Mostly, kids with bad taste in music and fashion flooded this virtual chat room because their parents probably didn't want to drive them to the mall. Throw in that most of the player base consisted of pedophiles and you have the perfect mixture for just about every chat room on the internet.