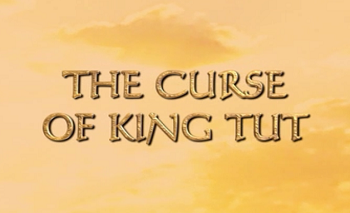 Overview: The Mummy and Indiana Jones walk into a bar. Nine months later, this shit shows up on the Hallmark Channel.

The Case For: Probably not one of the worst movies we've ever reviewed, but certainly one of the most entertaining.

The Case Against: You know how the Syfy Channel has a reputation for churning out shovelfuls of unoriginal, mindless garbage where [pointlessly large animal] eats [quasi-famous landmark] while [washed-up B-movie star] watches in slack-jawed wonder? Well, this is a Hallmark Channel original movie, which is about five steps below Syfy on the respectability ladder.

Part 1 - In Which a Mumby is Formed

If our feature today looks strangely familiar to you, and you're not psychotic enough to regularly watch the Hallmark Channel for horror movies, it's probably because we've already written about it here for our Casper van Dien extravaganza. We had a hunch that it would be worthy of a full review, and we were so right that we can't even cover the whole shebang in one week..

As you might have noticed by now, we don't exactly make a habit of splitting these things up, so rest assured we're not doing this just because watching both parts together is like watching a Peter Jackson movie in slow motion with half of Max Payne's medicine cabinet in your stomach. It is, but we're used to that. It's just not logistically possible to get in the amount of mind-fuckingly hysterical must-see media insanity required to do this movie justice in the time and space of one week's review. Case in point:

No, that wasn't Creed trying to reinvent themselves as edgy again or lost footage of some crappy Diablo expansion, it was an actual scene from The Curse of King Tut's Tomb. The first scene, in fact, so you know there's lots to look forward to.

Narrating over this collective fever dream is Casper van Dien as crackerjack archaeologist Danny Fremont. Danny is such a natural at his job that he's able to trace one of those chunks of magical frisbee that King Tut broke over his divine knee and hurled into orbit all the way to a featureless ice cave in the middle of the Arctic, just by dusting off some old pottery fragments or reading Sanskrit or whatever. Danny is a walking showcase of the key traits of any respectable Egyptologist/archaeologist, which of course include: 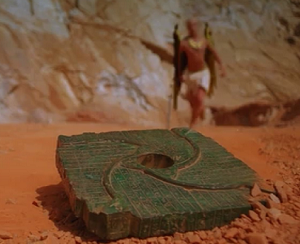 You have quite a treasure there in that Horadric cube emerald tablet!And of course, what's a good hero without his intrepid idiot sidekick(s)? Unlike Indiana Jones - who is totally overrated and really not as big of a deal as people make him out to be, by the way - our Danny boy has not one but two useless children following him around everywhere, only instead of being small, loveable, and Chinese, they're big, forgettable, and utterly retarded. Rico's Not So Roughriders have absolutely no discernible skills or training whatsoever, which is good because they don't actually do anything for the entire 3 hours. Nothing. No precociously driving getaway cars, no "no time for love, Doctah Fremont!"s, no being Sean Connery--nothing.

Aside from the wardrobe thing, Danny and Indy do have something else in common: they both love sticking it to Hitler. Of course this is Egypt we're talking about here, so instead of the real deal we've got, well, Egyptian Hitler. Actually, despite his stereotypically evil visage and the fuehrer in his belly, he spends most of the movie doing what Danny's sidekicks do, namely standing around slack-jawed inhaling sand and sometimes getting talked at by more important people.

Okay, forget Egyptian Hitler, we need a better nemesis...how about someone called Morgan Sinclair (Jonathan Hyde) who is so obnoxiously British that he owns a tiny tabletop hat stand and commits murders using his silk ascot as a garrote? Thrill as he squares off with Danny in the raw, merciless arena of academic discourse:

Professor Tiny, Doctor Knuckles, please escort our guest to the faculty lounge for a "conference".

Of course, being an adjunct professor of treasure-map doodling at Sand State University doesn't pay very well, so Sinclair moonlights on the side as a member of the Hellfire Council, also known as Her Royal Majesty's Chamber of Public Works and Evil Incantations (and Scones), a shadowy group of old British dudes with near-unlimited control over the world. Of course, nobody said that they were actually smart, and so their limitless influence is mostly used on acquiring furniture with plastic demon-bone accents, dicking around in a desert wasteland, and trying to ruin the reputation of an archaeologist who likes to write 100% serious books about how Atlantis is totally real and also the ancient Egyptian mythical demon apocalypse.