It is the worst of times, for this week unleashes the lamentable Gnomeo & Juliet, the downright embarrassing Just Go With It and the almost completely unnoticeable The Eagle. Obviously, the only new theatrical release worth seeking out is Justin Bieber: Never Say Never, which we didn't bother to review, so it must be great!

EXPECTATIONS: I can't even get my head around this one without having nightmares. Shakespeare re-imagined for a new generation as a poor man's Toy Story, all set to a soundtrack of Elton John songs and featuring the vocal "talents" of Ozzy Osbourne? Imagine my delight.

REALITY: I am going to keep this brief, if only to save my own sanity. Needless to say, Gnomeo & Juliet is a bad film, terrible in fact. The only question worth asking here is "why"? Why adapt a play for an audience that won't appreciate it in the first place if you're going to be forced to change the ending for fear that the little tykes will be upset? 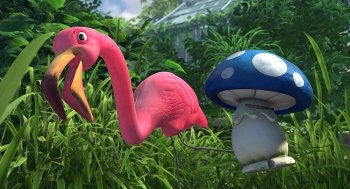 Wacky character design, just what the bard was missing.If any of you went to school, and I imagine a reasonable percentage of you did, you'll have studied the hell out of Romeo and Juliet, usually chosen for its supposed relevance to young people. Now imagine you were introduced to the story at a much younger age, and in order to make it more palatable, they turned all the characters into animated gnomes, changed the ending and openly mocked the source material. Now return to those days when you studied Romeo and Juliet with that in mind and just see how much less interesting it is.

You know the story: The Red gnomes and the Blue gnomes are at war, playing out their rivalries through extreme lawnmower racing. The star lawnmower racers are young Gnomeo (James McAvoy) for the Blues and the ruthless Tybalt (Jason Statham) for the Reds. Meanwhile, on the Red side of the fence we are introduced to Juliet (Emily Blunt) and her over-protective father Lord Redbrick (Sir Michael Caine). Juliet longs for adventure and freedom, and through contrived plot machinations, Gnomeo and Juliet meet and fall in love in a neighbouring garden. 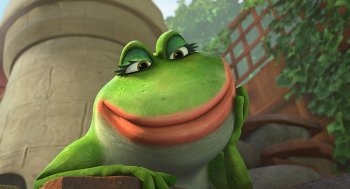 Suddenly I find myself very interested in the works of Shakespeare. If only they'd thought of turning the characters into stupid-looking lawn ornaments earlier.Obviously their love is doomed from the start due to the feud between their families, and everything ends in tragedy, or so the story goes. Well, here is where the biggest deviation from the source material pops up, and the one that would be the most insulting to Shakespeare purists. To lead us into the third act, Gnomeo has a conversation with a statue of William Shakespeare (voiced, rather appropriately, by Patrick Stewart), who describes the ending to Romeo and Juliet and attempts to explain the tragic undertones. Gnomeo declares this to be a terrible ending and claims he can come up with a better one. Hold on, it gets better. Gnomeo and Juliet are then seemingly destroyed by a giant angry robotic lawnmower. Hold on, it gets better. The feuding families are so moved by their losses that they end the feud and form a peaceful truce. Then it turns out Gnomeo and Juliet aren't dead after all and everyone dances. Okay, you can laugh or cry now as you see fit. 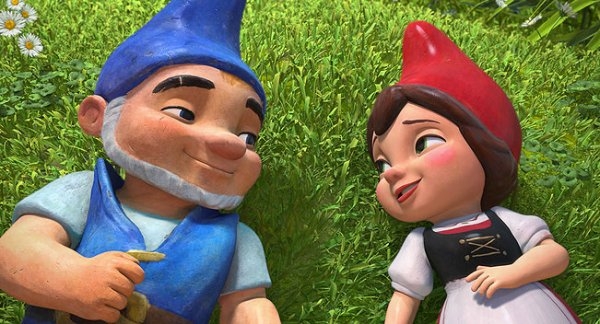 I think there may be a lot of people watching this in the vain hopes of seeing gnomes commit suicide. That would have been something to see.

You know that phrase, "It ain't Shakespeare"? It usually refers to something that can be moulded or improved with more work or improvisation. Surely, by definition, the antithesis of this would be "It is Shakespeare" and that would imply that you don't mess with it? I'm no zealot about to rant and rave about the untouchable perfection of Shakespeare, but when you literally mock your source material by telling a cartoonishly self-important characterisation of its author that you can do better, you really need to follow that up with something more interesting than "How about they don't die at the end?" See, now you can have your cake and eat it too!

And once again, we have an animated film in which all the characters dance at the end. How do I vote against this? There must be a way of putting a stop to such sugary shite. Or maybe I should just give up and go along with the trend by putting on a production of Romeo and Juliet where every cast member dances at the end, even the dead ones, just to keep the kids happy. I'm sure Shakespeare would approve.

MINORITY REPORT: "The sequel was better. Rosencrantz and Guildestern Are Salt Shakers really nailed The Bard's sense of humor and penchant for food" - Donovan Laird, The Wasteland Chronicle