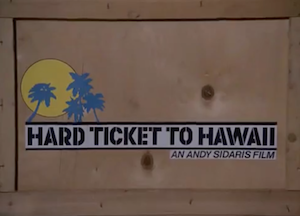 Overview: Imagine filming a playground full of spastic preschoolers playing an ill-defined game of cops and robbers, transcribing the resulting video into Esperanto and back, and then handing it to a cartoonishly racist lecherous old geezer with no scruples and an irrational hatred of shirts. Congratulations, you've just pictured at least one scene of Hard Ticket to Hawaii.

The Case For: If you've ever wanted to see the elusive natural beauty of Molokai, most of this movie seems to have actually been shot there.

Alright, some of you probably know why you're here already, so let's just get it out of the way: 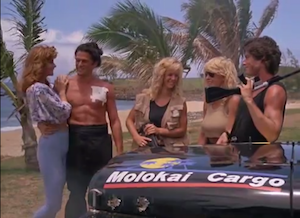 Glorious. Gratuitous. Gelastic. Gumpadelic. Mad Goofus, yo. These are just a few of the G words that don't even come within a galactic fuckmile of describing that (now somewhat classic) scene of pure high-test 80s. They could've easily sold that whole bit even without the upside-down skateboarding, the Costco-sized quadruple-barrel Duke Nukem rocket launcher, or the doofus randomly carrying around a blow-up doll just for the sole purpose of giving Bazooka Joe there an extra thing to blow up (gotta use them rockets on something, right?).

Sure sets a high bar for the rest of the movie, huh? A bar that, tragically, Hard Ticket to Hawaii slumps under like a drooling misshapen premature baby with no spinal cord trying to limbo under the Gateway Arch. Indeed, most of the remaining 90-ish nipplerrific minutes are a lethargic Sunday sermon compared to that scene -- assuming your typical lethargic Sunday sermons usually include razor-coated death frisbees, giant radioactive toilet anacondas, hang glider go-karts, helicopter Uzi duels, and extreme bazooka Feng Shui, that is. 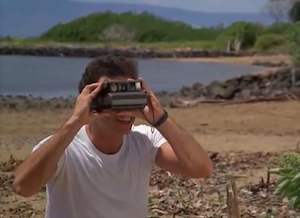 Dammnnn, I’m lookin gooooood.Premise-wise, we’re not really sure just what the hell a “hard ticket” is supposed to be, exactly, but we do know that an Easy Ticket to Hawaii probably involves shooting crapsploitation movies like this on location there and spending most of your actual time and budget getting drunk/high on the beach and ogling 80s girls in tight bikinis. At least, it’s an easy ticket if you’re either A) a chiseled male model with fake martial-arts training and a severe shirt allergy, B) a voluptuous woman with a medical condition which requires your nipples to be exposed to direct sunlight every 30 minutes, or C) a lecherous old hack of a director who seems like he was probably holding his viewfinder one-handed for the entire shoot.

As far as the actual plot goes, uh...let's see...well, there's something really dumb and vague about drug agents, a shadowy criminal syndicate led by the sinister Hans Blöhard and his sinister right-hand man, Bullet-Tooth Tony Touched The Ooze and Became a Mutant Gopher or Maybe Some Kind of Shiny Guido Lamprey. And let's not forget the greatest movie snake you will ever see in your life:

"How about your stools? Would you describe them as more Liquid or Solid Snake?"