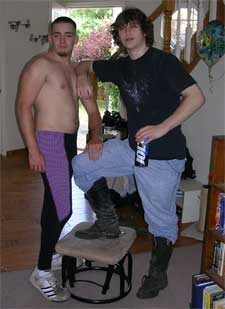 Frags and I enjoying a Jolt energy drink. We like to work out a lot. We also like wrestling.In the beginning, there was Jolt Cola.

Decades before countless revolting energy drinks spawned throughout American grocery stores, Jolt stood alone. While other soft drink manufacturers foolishly chose to advertise their product's great taste or value, Jolt used a lot of capital letters to brag that their cola contained enough sugar and caffeine to dissolve the Statue of Liberty. I guess it makes sense in a way; Budweiser and Miller spend billions of dollars advertising their superior taste or special light brew, while Natty Ice simply slaps a two-cent red sticker on each 12-pack reading "THIS SHIT GETS YOU DRUNK, FAG."

Much like Natty Ice, Jolt targets teenagers and college students with their current line of energy drinks. Plaster advertisements across your campus, annoying and alienating the entire school, and "Wet Planet Beverages" will reward you with a free envelope of Jolt condoms! Take a photo of yourself doing something monumentally stupid with their energy drinks and you might receive a case of their crap! Win a soda, lose your dignity!

The PR Manager from Wet Planet Beverages recently contacted me and asked if I would be interested in reviewing a free case of their Jolt energy drinks. Apparently they never received the memo proving I lost all remaining relevancy back in 2003. Perhaps that notice got filed under the letter revealing my utter contempt for energy drinks, or the fact sheet explaining I run a comedy website which mocks retarded garbage.

Despite the questionable motive, I informed them I'll drink or eat anything if it's free, so they promptly shipped me a crate of their caffeinated crap. This is one of the many incredible "perks" I occasionally receive for being a webmaster on the internet, like the time in 2006 a Lee's Summit Applebee's server recognized me and offered a free basket of chips and salsa. Yeah, you read that correctly, over the past two years, my internet fame got me a dozen free sodas and a bowl of tortilla chips. At this rate, it's only a matter of time before my amazing internet fame pulls in a real "big ticket" item, like a gallon of buttermilk or some epoxy putty.

So without further boring words, let me introduce Jolt Energy as the focus in today's Energy Drink Roundup Spotlight, an incredible honor which can only be achieved by sending me free shit in the mail. 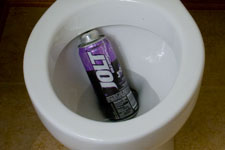 Upon twisting open the Wild Grape lid, I was immediately surrounded by a strange chemical cloud which smelled like a trick or treat bag after it had been repeatedly raped by truckers. This noxious odor proceeded to stalk me throughout the day, offending nearby children and religious folks. Fortunately, Wild Grape's bark proved much worse than its bite, an amazing coincidence considering it vaguely tasted like watered-down tree bark.

The label "Wild Grape" apparently refers to only its stench, as the drink itself lacks any sort of noticeable flavor whatsoever. I had to frequently look at the can to remind myself I wasn't drinking carbonated ghosts, which I suppose is a refreshing change from the standard energy drink bouquet of "diseased dicks marinated in battery acid." If you enjoy the smell of Smarties candy, but simply cannot dedicate the time or commitment required to dissolve one in your grandfather's embalming fluid, Jolt's Wild Grape will hump your balls with pure excitement.