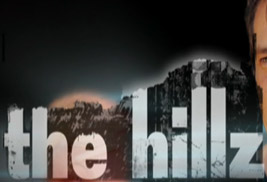 The Case For: It's kind of funny if you watch this movie with friends and when Paris Hilton shows up you shout "Thar be lazy eyes in dem dere Hillz." Otherwise, there ain't much of one.

The Case Against: Ever wanted to watch a movie about white gangstas trying to find someone to buy them alcohol? Nope, didn't think so. 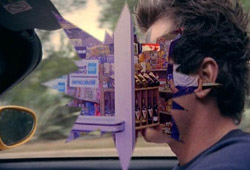 Ahh, the star wipe. Is there any better way to express the angst of a bored white teenager?

Although you fags with “college educations” and “comprehension skills” and “shirts that don’t have the word ‘fuck’ written on them somewhere” may disagree, I’m pretty sure the focal point of “The Hillz” is supposed to be Paris Hilton’s lazy eye.

Before you start wailing and gnashing your e-teeth at the life-affecting statements on this free Internet comedy site, let me say this: I know C-list celebrity-bashing is played out. I wouldn’t piss in David Spade’s mouth if his gums were on fire. I also think that the entire E! Network should be carpetbombed, assuming it won’t harm the population of the already endangered metrosexual. I own a lot of stock in skin-safe lubricants and mirrors, two things I understand those types buy in droves.

But as an SA reviewer I feel objectivity is of the utmost importance, and I am not bashing on Paris here. I am simply saying that her horribly lopsided, bloodshot, vagina-with-an-olive-stuffed-in-it-looking eye serves as a guidepost for every major plot point in “The Hillz”. Take, for instance, the DVD menu, which features a rendition of the eye so large many Japanese movie watchers fled from their televisions after being horrified by what they called the “God Oyster”:

Right after this first appearance we are introduced to the five main characters we are stuck with the entire movie. Because he has so much story to tell and so little time, Writer/Director Saran Barnun (who, as far as I can tell, is neither male nor female but actually an entity that exists solely to make movies that really piss me off), has a narrator introduce us to each of the four main characters while pictures of said characters shooting a basketball appear on screen. This is a much easier method of introduction than, say, dialogue or characterization, and it allows the characters (only two of whom have anything to do with the story) to spend most of the movie getting to the task at hand, namely staring at the ground and stuttering off a few lines until the cameraman decides to do a DRAMATIC ZOOM IN on their faces for no reason at all.

In the absence of black people in “The Hillz”, Barnun decided to have a bunch of white people who try to act black and fail miserably. Black people, of course, are world-renowned for their prowess when it comes to insulting others. White people acting like black people, on the other hand, are known only for their ability to collect welfare and hang out in gas station parking lots 25 hours a day, fully one hour longer than any scientific clock allows.

I am not a racist guy. My town is one step away from recognizing “Apologize to a Minority Day” as a progressive apology for the racist Anglo-Christian establishment of Christmas. I personally am so forward-thinking I often hold block parties, during which a transsexual ballerina stands on my porch and shouts “DIVERSITY” through a bullhorn while all my guests watch video clips of white cops firing bazookas into Harlem day care centers. When friends come to visit we often joke with one-another with phrases like “dude, you’re such a freaking hetero”, and we spend much of our free time talking about painting the White House black in a show of racial unity. But god damn it, is it too much to ask for some black people in movies with titles that end in “Z”?

The letter “Z” denotes an urban flavor in a movie. How much different would “Remains of the Day” be if they called it “Remainz of Da Day”? If Saran Barnun has his say, it wouldn’t be – although “The Hillz” ends in a “Z” there is literally not one black person in it. In fact, the only minority to speak of is, I shit you not, a convenience store clerk named Ahkmel, and his two minutes of screen time could easily have been replaced with a big cardboard box that has “I AM A STEREOTYPE GIVE ME A TOWEL TO PUT OVER MY WIFE’S FACE SO I CAN PUNCH HER” painted on the side.

In the next scene the four main characters (including the protagonist, “Steve 5”, whose name is never explained) hit up a local grocery store to get someone to buy them some alcohol. Of course, they’re repeatedly shot down and then harassed by the cops. The police, who have all the appeal and star power of two compost heaps, tell the kids to “stop causing so much trouble” in their “goddamn fancy cars,” and then we’re taken to...

Here Paris is introduced as “Heather,” a girl Steve has been in love with since the eighth grade. All the boys in the group think Heather is the hottest girl in their high school, undoubtedly because of California’s liberal school inclusion policy, a piece of legislature that allows face wound victims and autistics who insist on wearing Halloween masks all the time to attend classes (presuming they can speak Spanish). The boys ask Heather and her boyfriend to buy them a bottle of liquor and are shot down. Steve asks Heather if she is going to the big party that night, to which she responds “high school parties are so... four years ago.” A scuffle between the boys and Heather’s boyfriend ensues, during which the lamest insult exchange in the history of the world happens:

Steve 5: Hey, bro, why don’t you just get us the bottle of Jack?
Heather’s Boyfriend: You have a better chance of getting laid in a whorehouse... with no dick or money!
Steve’s friend Duff: Hey, don’t you frat faggots have a goat to fuck or something?

Before the fight can turn from a gay sissy-slapping to a homoerotic wrestling session (complete with blond dudes in tight wife beaters), a friend of the four boys pops up and pulls a gun on Heather’s boyfriend. He runs away while Duff fantasizes about shooting the cops that were harassing them earlier. Steve says seeing the gun “changed Duff’s life,” obviously because a twentysomething wigger in California has never heard of, let alone seen a gun before, and experiencing such a wonder of black powder and magic was a lot like Christopher Columbus discovering the pleasures of whipping his slaves just a little too hard.