Super 8; Judy Moody and the Not Bummer Summer

Remember being a child? Of course you do, you're only eight years old yourself, which is why you're so eager to see our review of Judy Moody and the Not Bummer Summer! Before we get to that, though, we have some film called Superb, by some guy named Georgie Abrahams or something.

EXPECTATIONS: I'm not going to lie; Super 8 does not look all that great to me. In theory, a Spielbergian adventure film set in the late 1970s that stars a bunch of kids should strike me right in my nostalgia processor's sweet spot. Hell, Steven Spielberg himself is even directly involved. Still, there's something about the trailers that just rings hollow or disingenuous to me; I can't quite put my finger on it. Regardless, it's a JJ Abrams joint, so I at least expect a letdown of a payoff, more lens flares than in his ridiculous Star Trek movie, and maybe a couple passing references to Slusho, Abrams' pet fake drink product. Oh man, I hope this time the monster is actually a giant blob of Slusho...

REALITY: Well, I was half right. There is most certainly a monster in Super 8 (oh, come on, don't act like that's a surprise), but it is decidedly not a giant blob of frozen drink product. The movie itself is sort of a giant blob of frozen drink product in its own way, though. Super 8 is film-nerd pandering of the most obvious, on-the-nose kind; it's a modest summer blockbuster with plenty of engaging characters and some wonderfully crafted set pieces, but it owes its entire existence to the fact that, 30 years ago, one guy made a few pretty damn good movies. 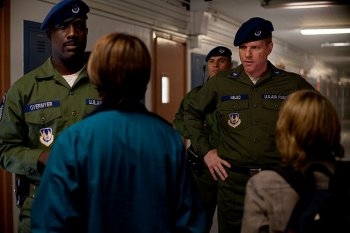 Military types threatening children? I hope they're only armed with walkie-talkies.The film is set in 1979 in the small town of Lillian, Ohio. It's been four months since Joe Lamb (Joel Courtney) and his father (Kyle Chandler) lost Joe's mother in a steel mill accident. In the time since, Joe and his friends have started working on a zombie movie for an amateur film contest. While filming a scene at the local train station, the gang witnesses a massive, fiery train crash. In the wake of the destruction, it becomes clear that something has escaped, and strange events start plaguing the town. Machines begin disappearing, people go missing, power outages become a common occurrence, and the Air Force is in town conducting some shady business. In the middle of all this, Joe's friend Charles (Riley Griffiths) is hellbent on using the incident footage in the name of added production value. While Joe's father investigates what the Air Force is up to, the kids take it upon themselves to finish their movie and unravel the mystery of the train crash.

On paper, this looks like a fantastic story to put onscreen. It has all the elements of a fun adventure/mystery romp. You've got a well-chosen, plucky cast of kids trying to make a movie; a dangerous conspiracy story; and some nicely staged monster attack sequences. Where things start going wrong is in the execution, which is bizarre considering the execution is the entire point of the movie.

The film is pretty upfront about being an homage to the classic films Steven Spielberg directed in his heyday. Specifically, Super 8 evokes in equal measures Jaws, Close Encounters of the Third Kind and E.T. This isn't some wacky interpretation I dreamt up during the movie; it is exactly the tune JJ Abrams is playing at. In blending some of the narrative elements of Close Encounters and E.T. and spinning them with the horror techniques Spielberg implemented in Jaws, Abrams is attempting to create precisely the kind of film that the man himself would have made in the mid-1980s, had he not been farting around with George Lucas on a second Indiana Jones movie.

And the final product is pretty cool for a calculated effort to mimic something Spielberg did by accident. One of the reasons those early movies were so great (and continue to be great) was the fact that he took largely forgotten cinema relics, dusted them off, and dragged them kicking and screaming into the modern era. In the late-'70s, people really weren't clamoring for creature features or flying saucer movies, but Spielberg found a way to make these out-of-fashion B-movie staples fresh and exciting again. And then once E.T. made all the money in the known universe, Hollywood executives got on their knees and begged him to please never, ever stop.

There was an awesome explosion over there and not one of you was looking!

The problem with Super 8 is that Steven Spielberg never really went away. In the thirty-six years since Jaws was released, nobody has ever said, "Gee, I wonder whatever happened to that guy that made Jaws..." You know what happened that guy? He went on to direct the longest and most popular string of hits in cinema history (and also The Terminal). Not a single person who has watched movies in the past thirty years has forgotten this, so what exactly did JJ Abrams think he was going to accomplish by attempting to pull a Spielberg on Spielberg?


Super 8 exists in roughly the same cinematic ballpark as Tron: Legacy. It's both an homage to the film spectacles of a generation ago and also...oh, right. That's all it is. It attempts to recreate the look and feel of classic Spielberg while also making use of current filmmaking techniques and special effects to keep things looking bright and flashy so modern audiences don't get bored. That's fine and all, but once you get over the fact that you're watching a new thing that looks like an old thing, you realize that there's not that much going on underneath the hood of the new thing. Super 8 is a film eminently obsessed with generating nostalgia for nostalgia's sake. The same way that Joe clings to the memory of his mother, JJ Abrams wants nothing more than to take film back to the 1970s, when Spielberg was still inventive and movies in general didn't suck quite so much.

It's a nice idea, but I can't reiterate enough how strange it seems to make a movie asking people to reminisce about movies that are already on everyone's DVD shelf and are in constant rotation on basic cable. Super 8 plays more like a feature-length commercial for the Sunday Afternoon Movie of the Week than its own movie with its own agenda.

When children are involved, police stake-outs tend to forego the subtelty they usually strive for.Now, it occurs to me that I've spent the bulk of this review complaining about a lot of the big-picture stuff, so let me close by mentioning some of the nuts and bolts. As mentioned before, the cast is particularly well-chosen. Joel Courtney and Elle Fanning have great chemistry together, and it's not difficult to see either of them becoming stars in the near future. The design of the film is also pretty impressive. Abrams and his crew do a fine job of visually recreating 1979 without copping out and slapping Star Wars posters all over everything. They've crafted a 1979 that feels completely believable.

The monster itself, on the other hand, is not particularly interesting. Any scene in which it attacks is pulled off spectacularly (the bus sequence, specifically), but once we get the reveal of what the monster actually is (and then later what it wants), I couldn't escape the feeling that this part of the film was completely an afterthought. The mystery and the build-up works far better than I had expected, but the finale leaves a lot to be desired. If Abrams wanted to subvert my expectations at this point, he would've had to actually create some kind of payoff for once instead of ending the movie on a hug.

If you've seen any of the Spielberg movies mentioned above, then you pretty much know every single beat of Super 8. That's not necessarily to say that it's boring; there are occasions where the film expects us to expect certain things, and then does the opposite. More often than not, however, Super 8 works so hard to be the classic Spielberg movie that Spielberg forgot to make that it forgets to stop for a moment and realize that this is 2011. There's a reason why even Steven Spielberg couldn't recapture his own magic with the last Indiana Jones movie. Times change. Tastes change. People change. For better or for worse, though, nostalgia only seems to want to stay the same.

MINORITY REPORT: Imagine a world where you can re-watch anything, anytime, anywhere. Imagine if your nostalgia could be satisfied simply by plumbing the depths of your DVD collection. Imagine a future where an exhaustive history of media is readily available to you and we no longer need vague remembrances such as Super 8. Just imagine... -Ian "ProfessorClumsy" Maddison