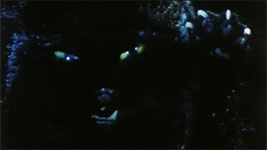 Overview: A cat named General and his two human-looking companions search for magical octagons to use in their battle against a shape-shifting meat mushroom with a penchant for arson. A guy who owns a lot of books and not many shelves gets involved for obvious reasons (he's retarded).

The Case For: Imaginative special effects and huge amounts of gore make for a movie that would be great to watch while you are incredibly stoned.

The Case Against: Watching just about anything other than approaching police sirens is great when you're incredibly stoned.

"The Cat" is a movie made by placing other movies into a blender. You get handed your steaming mug of "The Cat" and you can see a thick broth of "The Cat from Outer Space" with nice beefy chunks of "The Thing" and "Invasion of the Body Snatchers" floating around. Most people, however, will simply remember it as "that crazy movie where the cat and the dog have a kung fu fight."

Things begin innocuously enough with a chubby apartment-dweller annoyed at the late night thumping sounds emanating from his neighbor's abode. When he pounds on the door he is greeted by a dazed old man and a creepy girl and her creepy cat. Chubby has a top shelf freak out over the cat and when he notices that the old man's hand is covered in blood he screams and runs back to his apartment.

Incorrect.The next day, Chubby is headed off to work when he spots the old man directing some movers to load up a moving truck. When Chubby peeks inside he sees the girl and the cat sitting in the back of the truck. They leave and Chubby decided to head back into the apartment building and do a little digging around. He quickly uncovers a room in their apartment covered with newspapers. Wrapped within those papers is a bloody loop of intestines. The police arrive shortly and determine that the intestines belong to a cat. A good laugh is had by all at the expense of poor old fatty.

"Haw haw, silly fatty, you called the cops just because you found a room covered in newspapers with bloody intestines on the floor?! Haw haw, that's perfectly normal!"

Normal or not, Chubby's writer friend Wisely takes an interest in the cat story. Wisely is some sort of writer or detective who lives in a mansion that features a large room where all of the walls are covered with - and sometimes composed of - books. Wisely doesn't have any shelves, he just has hundreds of stacks of books.

Later that night, the girl and the cat from the previous scenes are busy sneaking through a dark museum. They're after an artifact that appears to be what you would get if you punched your fist through a pie tin. They call it an octagon, so I guess they're just really into geometry. The cat displays some unusual powers, including the ability to disintegrate glass. The old man, now in ninja costume and apparently named Errol, arrives to help them subdue a security guard. Just as the trio are about to make off with their pie tin, the creepy face of an old hobo appears at a window. The hobo's eyes pop out of their sockets and he pukes up red pudding. Then he disappears into the inky night beyond.

That's an armpit, you perverts.Moments later a big meat log flies through the window and begins expelling sinewy tendrils. In seconds it's a huge meat mushroom glowing with unnatural heat. When guards arrive they are snatched up by the meat mushroom's pseudopodia and partially melted. Despite the meat mushroom's efforts, the girl, the cat and Errol make good their escape.

This curious incident would all be water under the bridge, but the next day Wisely hears word of the break in at the museum. He's lounging out by the pool reading one of his many wall books when his exceptionally sweaty girlfriend stops by to show off her sweaty pits. The camera lingers on the dewy vaginal folds of her armpits before a TV explodes with the news that burglars stole an octagon from a local museum and killed multiple security guards.

Wisely throws his girlfriend in the pool and heads out to investigate this latest incident. The museum is badly burned and the hideously melted corpses of the security guards are just being covered. A momentary search by Wisely reveals some hair samples that Wisely is convinced belong to the cat. A logical conclusion, of course. Your fat friend sees a creepy cat, so you assume it was the mastermind behind an art heist, multiple murders and a fire set in a museum.

AAAAAAAAAAAH!It turns out that there is a second octagon pie tin housed in another museum across town and Wisely thinks that the cat will strike again. He goes to some sort of creepy Doctor Doolittle type of animal castle and picks out a giant mastiff to do battle with the evil cat. Wisely thinks that if the thing has the ability to liquefy armed security guards a giant dog will be a cracking success.

Meanwhile, a cadre of shady detective-types head to an abandoned house only to become entrapped by growths of meat mushroom. It's unclear why they are there or what they are trying to accomplish, but things go from bad to mushroom worse when the fleshy fungus starts melting cops. After some delightful bursting faces and severed limbs the mushroom has taken out all of the detectives, but the story doesn't end there for these unfortunate lawmen. The mushroom reconstitutes and reanimates their corpses to serve as his minions. Even though the mushroom reanimates five of them, four are never seen again.