Prepare to be awed by the terrible flaws of some of these films. We begin with The Impossible, which is reprehensible; then we have Texas Chainsaw 3D, which is idiotic; next it's Hitchcock, which is muddled; and finally Hyde Park on Hudson, which is misdirected.

EXPECTATIONS: There has been a lot of negative buzz surrounding this film in regards to its institutionalised racism. It seems impossible for a major film to be released about an earth-shattering natural disaster in Thailand without having the focus be entirely on a bunch of white people. What's worse is that the true story upon which this film is based happened to a Spanish family, not a British family. The argument is always the same; non-whites harm the international box-office and these guys are not about to miss an opportunity to make massive amounts of money from the suffering of real people. I want to give The Impossible the benefit of the doubt, though, so who knows? Maybe this specific story is one that absolutely has to be told.

REALITY: Some films released in the awards season wear the mask of inspiration: There's nothing the Academy likes more than being reassured that there is some untapped layer of the human spirit that adversity will bring out. If you want to win an Oscar, make a film about never giving up hope. While The Impossible is occasionally moving, there is absolutely no fun to be had here. This film is, for the most part, an arduous and unpleasant experience that will leave you utterly drained. It is also every bit as exploitative as you'd expect. 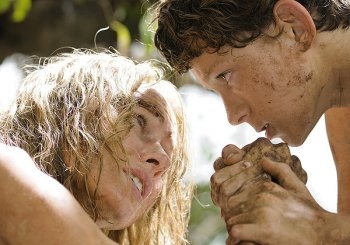 Of course these marketing shots are nowhere near as horrific as the imagery in the actual film.Ignoring the reality, The Impossible is a story about how a middle-class family was strengthened by the horrifying certainty of death and brought closer together by the tiniest slither of sheer luck. I won't bother recounting the plot in detail, there seems little point given that it's been reported all over the news endlessly from day one. A family, holidaying in Thailand, fall victim to a massive tsunami and they defy all the odds by not only surviving, but reuniting and returning home. Call that a spoiler if you like, but the truth of this story is out there in so many outlets that it's inescapable at this point. In case you don't know, though, this film follows the misery of the Bennett family, whose holiday is cut short when an enormous tidal wave wipes out their beach resort and most of the surrounding area. After soldiering through absolute misery and horror, Maria (Naomi Watts), Henry (Ewan McGregor) and their three sons are on the hunt to find each other and survive.

I'll get the good stuff out of the way now, because The Impossible is not devoid of competent storytelling. The leads do strong work, even when wrestling with horrible dialogue. McGregor has never quite convinced me that he's the great actor everyone wants me to think he is, but he has some good moments here and Watts... well, let's just say that she does everything required of her admirably. Her performance is good, very good, but I couldn't help but feel just as sorry for her as I did her character, but more on that later. Generally speaking, The Impossible is an applaudable exercise in emotional manipulation and that's exactly the kind of thing the Academy wants. That's where the mask of inspiration comes from. You're distraught when it looks hopeless for these people and then elated when they don't die, what could be more inspirational than that? Well, for starters we could do with a message a little stronger than "Be lucky!" 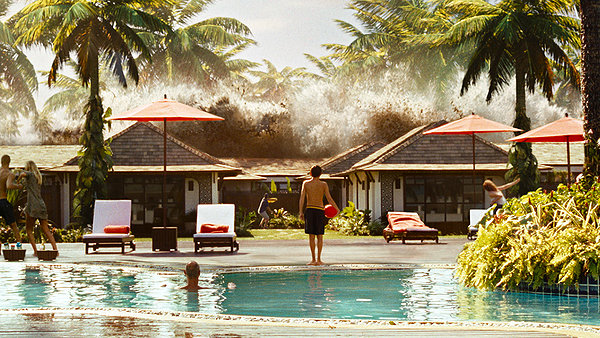 Remember how The Grey took its audiences to the edge of death, carefully guiding their hands and telling them that their lives will end, it's an absolute certainty no matter what they believe, and when it does come it will be terrifying because nobody knows what it's like so they might as well meet it head on? The Impossible is a wishy-washy version of a similar idea. Sometimes random disasters occur and kill thousands of people. This could happen to you. Then again, you might survive. Who knows? Life's a lottery. While The Impossible may move you to tears, it isn't going to leave you with any profound thoughts other than "Gee whiz, I hope that doesn't happen to me."

All of this leads me to wonder just what it is about this story that J.A. Bayona felt was the standout message to take away from this disaster. Of all the stories of all the people affected by this, the survival by pure luck of one family is probably not the one to inspire us. Why, there's a scene in this film in which the population of a small local village, who will have lost a hell of a lot in the waves, go out of their way to help whoever they can find. I want to watch that story, the story of a group of people whose first instinct is to save as many people as they can. Or how about the nurses in the crowded hospitals who, by their own admission, are just doing the best they can? How about people who lost everything and then started to rebuild? There have to be more inspirational stories here. 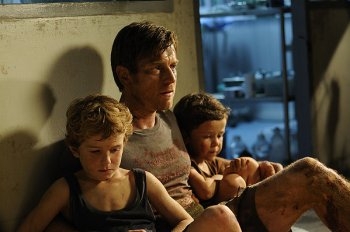 You got it easy, mate. Wait 'til you see the state your wife's in.When you take a real-life disaster like this and put it on film, you're turning it into a symbolic event. The results of this are two-fold. Firstly, you run the risk of cheapening the actual devastation in order to reduce thousands of deaths into a relevant narrative device for your lead characters. In this case, a family with communication issues is forced into separation and the scattered members have to find and care for each other. Is that worth it? Secondly, you run the even bigger risk of falling into the realm of pure exploitation, and it's here that The Impossible is at its worst.

Yes, this is a massively exploitative film. I don't mean in the sense of Django Unchained evoking the imagery of the exploitation genre in order to make a point about slavery or Hobo with a Shotgun using exploitation as a way to display a childish naiveté; I mean in the sense of actual exploitation. I already mentioned how the whitewashing of the main characters was a financial decision, but of course we need to stunningly render the reality of an actual tsunami, don't we? And that costs money. When big, expensive visual effects sequences trigger the events of the film, it feels like 2012 gone wrong. Vast helicopter shots of the now-flooded resort with bodies being swept out in the current are played with the same sense of scale and spectacle as any given scene in the Roland Emmerich film. How exciting that you've turned this into a visual effects blockbuster for our popcorn-scoffing children to enjoy.

It gets worse from there when we see just how the filmmakers treat Naomi Watts' character. I understand the desire to capture the reality of the situation, but this feels like a torture porn film where God is the villain. Watching her get beaten again and again with increasing severity is extremely unpalatable. At one point, her son is walking behind her and he notices a huge flap of skin hanging off the back of her leg. Naturally concerned, he says "Mum, you're bleeding." She turns around at this point to reveal her breasts to the camera. Get a quick closeup of that and voila, you're no better than the teenage victims in the films you'll read about on the next page. The MPAA saw fit to grace this film with a PG-13 certificate for "intense realistic disaster sequences, including disturbing injury images and brief nudity." That'll have the teenagers lining up round the block.

In light of The Impossible, I am now set on reassessing 2012, because that will surely end up being the more sincere film. For all of its constant reminders that it's a true story, The Impossible rings false.

MINORITY REPORT: I really don't understand the argument that non-white characters kill the overseas markets, and yet it amazes me how insanely true it is. Hey other countries, we've been marginalizing you guys for centuries, we're pretty good at it. We don't need your help.- Martin R. "Vargo" Schneider