The Forgotten Permutations Of Green Day

Welcome to the first installment of Music Article. What's this all about? Don't we already have a semi-regular music feature called Garbage Day?

Yes. But as you might have noticed, the other Garbage Day writers actually know things about music. I, on the other hand, know very little about anything. As a result my contributions tend to take a concept that is vaguely related to music and use it as a launching pad for some supremely stupid shit.

Music Article is dedicated to that sort of nonsense. It's like Video Game Article with less insight. We're hoping to supplement Garbage Day, which you should read if you like writing that contains humor and wit, opinions, and relevant topics. 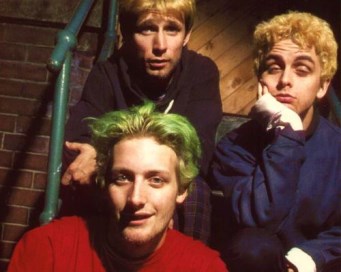 These were the guys who released a first album, Dookie, that became a major success and inspired many fans to listen to the band's first two other first albums. This version of the band persisted through the mega-popularity of "Good Riddance (Time Of Your Life)" and concluded shortly after the underrated album Warning.

Then there was punk-suited Green Day: 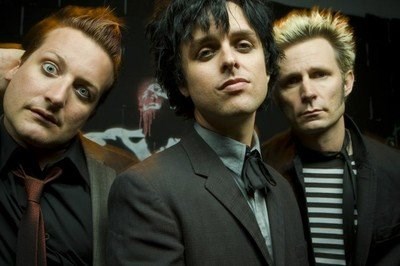 These were the guys with concept albums, political views, and a drive to do everything really big. Case in point: Later this year they're releasing a triple album, staggering the installments over the course of four months.

What most people don't realize is that the band has continually experimented and evolved over the past two decades. Their music, attitude, and look did not change overnight, but took on many permutations. These periods went largely unnoticed or vanished from our collective memory, but they were important nonetheless.

While performing at Woodstock '94, Billy Joe Armstrong and the crowd began tossing mud at one another. Naturally the playful mud fight got out of hand, and the resulting mess became one of the concert's lasting moments, right up there with the Spin Doctors' legendary set.

Green Day's fun-loving members had such a good time that they began to incorporate more mud into their act. Billy Joe had his guitar hollowed out to make room for mud. Drummer Tre Cool poured mud into his shoes before every performance so his feet would squelch every time he stomped on the bass drum pedal. Bassist Mike Dirnt slept in a normal bed, without any mud in it.

But when he slept, he dreamt of mud.

Eventually, the band's obsession got out of hand. They were wheeled on stage in a kiddie pool filled with mud, splashing one another and doing cannonballs in lieu of performing music. At one point an angry Billy Joe forced the entire audience to leave so that their empty seats could be filled with mud.

Their rather brilliant Mud Album was lost to time, as it had only been distributed on wafers of dried mud that were roughly the size of CDs. This drove the band into a deep depression.

Just when it seemed that Green Day had come to a pathetic end, the band found salvation in humor. Specifically, the sitcom Everybody Loves Raymond.

As huge fans of the show, Green Day were delighted when they were asked to record an updated version of the theme song. The band's enthusiasm was infectious. They were asked to become the show's house band, standing in the background of each scene and playing whatever felt natural.

Fans of the sitcom will fondly recall the sweet licks that accompanied Debra's browbeating of Raymond, or the jaunty tunes that came to life when Ray's father complained about his wife's cooking.

Soon Green Day was featured prominently - not with roles on the show, but with their actual position on camera. In the final seasons of Everybody Loves Raymond, the trio's faces could be seen less than a foot away from the camera, pressed together silently as the scene unfolded behind them.

The Biggest Band In The Universe

Fresh off the success of their Everybody Loves Raymond stint, Green Day became enamored with the idea of making things bigger.

Their first experimentation in this direction was the inclusion of nearly 800 new band members. The idea was to become the largest band of all time, with enough musicians on hand to tackle every genre with every conceivable instrument.

Surprisingly, the band gelled perfectly. Even though everyone had an equal say in the direction of the music, few conflicts arose and the resulting music was remarkably innovative.

Unfortunately, this iteration of Green Day was short-lived. Things came to a head when the original members lost one another's hands and became lost in the crowd. Frightened and crying, the trio eventually found another and promised to never let such trauma come to pass again.

After writing some of their finest music to date, they used cutting-edge computer graphics to create a digital performer that would put holo-Tupac to shame. The result?

(Thanks to Mike Nelson for that. I think.)